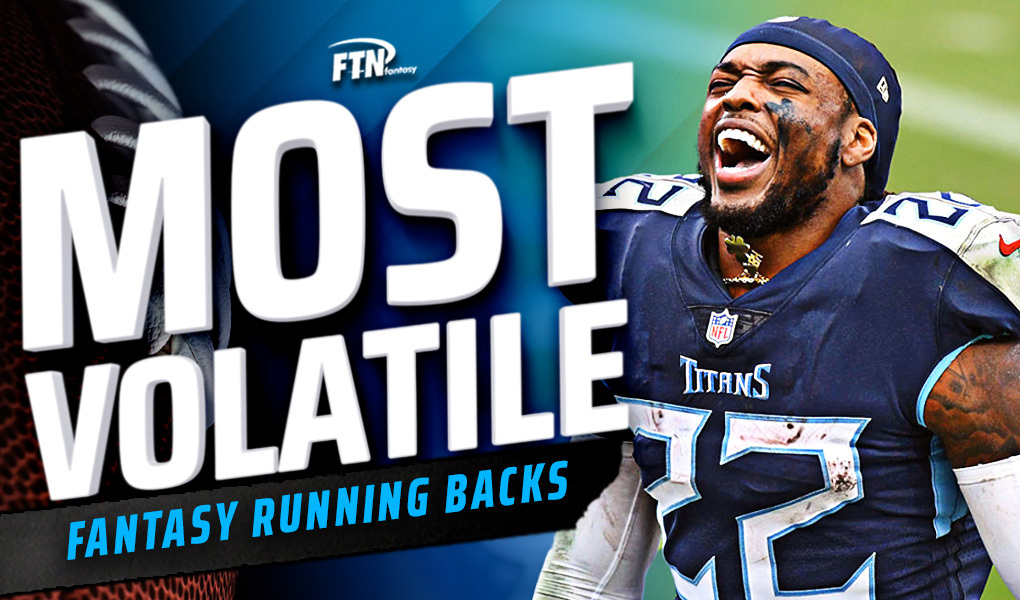 FTN's Tyler Loechner recounts the least consistent fantasy football running backs of 2021 and looks into whether volatility is a positive or negative.

Last week, we reviewed the most consistent (and most volatile) WRs in fantasy football. This week, we’re putting the microscope on RBs.

Similar to what we found in our WR research, being consistent as an RB does not mean you’re automatically a great fantasy option. In fact, for RBs, the opposite appears to be true (with only a few exceptions).

Let’s dive back in to the FTN Data to find the 10 most volatile fantasy RBs from last year (more on the methodology below). If you want to see the most consistent RBs, check out Tuesday’s piece.

“Consistency” is easy to generally define, but nailing down a methodology for fantasy football purposes requires arbitrary decisions that aren’t easy to defend. So instead of picking something random, I used standard deviation, which measures how far apart all of the data points in a set are from the set’s average.

Lower standard deviation means all the individual data points in a set are close to the average. Higher means more spread out.

We found a group of 60 RBs to analyze for this study by taking all RBs that played at least 8 games and then taking the top 60 based on fantasy PPG.

Then we ranked those 60 RBs from most consistent to least consistent/most volatile (shown below).

Derrick Henry scoring 10.7 points in Week 1 followed by 47.7 points in Week 2 is really all you need to know about why he ranked as the No. 1 most volatile RB in fantasy football last year. He surely would have challenged Jonathan Taylor for the RB1 position if he stayed healthy all year.

Rashaad Penny’s late-season dominance was one of the most random spurts of greatness we’ve seen in fantasy football land in years. This chart doesn’t even include in 190-yard, 1 TD performance in Week 18 (which we excluded from this study because so many starters didn’t play). Penny is currently going as the RB30-35 in early fantasy drafts behind rookie teammate Ken Walker. He’s my favorite sleeper on the Seahawks, even if he’s one of the true wild cards of the upcoming season.

Jonathan Taylor had a floor of 6-10 last year but a ceiling of 30 to 55, which is just absurd. Since we did this study based on standard deviation, he ranks third based on the ridiculous ceiling alone. (There are other ways we could have ranked these players, including by their coefficient of variation, but using basic standard deviation highlighted the point that ceiling players are what you really want in fantasy football. A list with Henry and Taylor as two of the top three is a big validator.)

James Conner, who is currently being drafted as a high-end fantasy RB2 for 2022 drafts, was phenomenal when given the lead role in Arizona last year. His floor games from early in the season came when Chase Edmonds had a bigger role. Then Conner settled nicely into the 10-15 PPG range — a fine fantasy player, but nothing incredible — before showing his 20- to 40-point range when given a full role. He could end up as a massive steal at his current ADP.

If we exclude the two games where Christian McCaffrey exited early due to injuries (Weeks 3 and 12), he shoots up to 23.8 PPG (second behind Henry) but would move from No. 5 on the most volatile list to No. 7 on the most consistent list. Yes, the names on the “most consistent list” were mostly bums, but if McCaffrey found himself on that list while averaging the second-most PPG, he would be the outlier, not the norm. We also know he has a 50-plus point fantasy ceiling. I really can’t come up with more reasons to say you should be drafting McCaffrey every chance you get.

A 44-point ceiling but a 6- to 7-point floor lands Uncle Len on the most volatile list with good company. Leonard Fournette is primed to be a fantasy RB1 again in 2022, and his price might even be depressed because the Buccaneers drafted Rachaad White, who could be a threat for some receiving work. But Giovani Bernard was supposed to be a threat for receiving work last year, and that didn’t pan out. Until some part of his role in the Tom Brady-led offense is pirated, I’m treating Fournette as captain of the Bucs’ boat.

Kareem Hunt got off to a rocking start to the 2021 season before injuries ruined it before October came to a close. Early reports out of Cleveland say Hunt and Nick Chubb are seen on the field at the same time together a lot. This would be a boon for Hunt’s fantasy value as it could mean more receiving work.

Aaron Jones hit his 41-point ceiling in Week 2 last year thanks to receiving work. In that game, he has 17 rushing attempts for 67 yards and a TD, but he added 6 receptions for 48 yards and 3 TDs. With Davante Adams out and AJ Dillon rising, there’s a decent chance we see a lot more Jones as a receiver in 2022, which would be a big boost in fantasy land.

Easily the most random name on this list, Justin Jackson finds himself here purely because of his 34.2 explosion in Week 16 when Austin Ekeler was out. If nothing else, his performance in that games goes to show that even backup RBs can go off when the situation is right.

Joe Mixon spent half the season hitting his floor (7-10 points) and the other half hitting his ceiling (25-30 points). Only twice all season did he actually land within his band of standard deviation (Week 4 with 13.7 points, and Week 17 with 15.6 points). He’s a solid pick at the Round 1/2 turn.