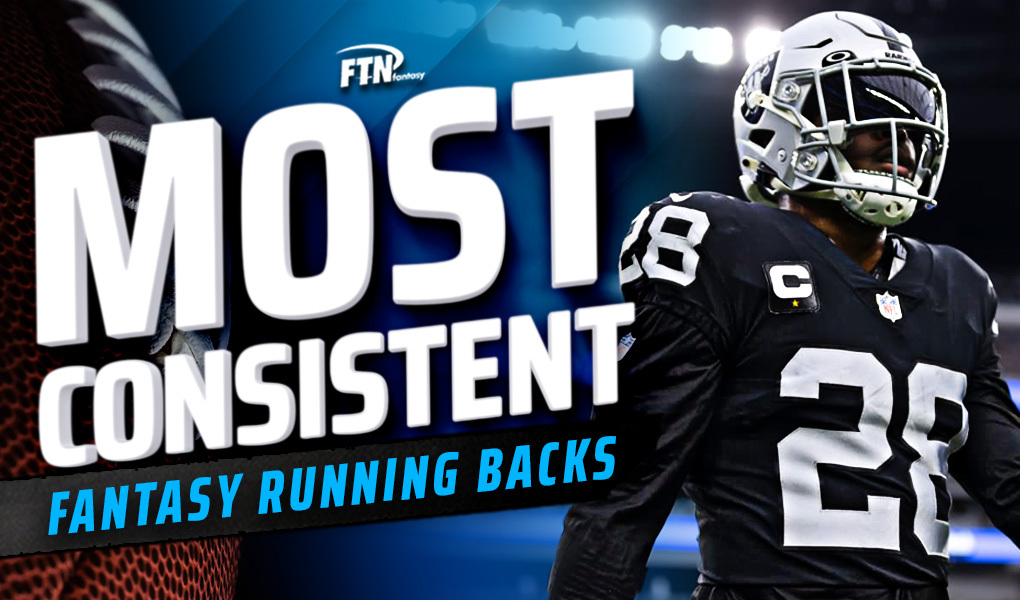 FTN's Tyler Loechner recounts the most consistent fantasy football running backs of 2021 and looks into whether consistency is a positive or negative.

Last week, we reviewed the most consistent (and most volatile) WRs in fantasy football. This week, we’re putting the microscope on RBs.

Similar to what we found in our WR research, being consistent as an RB does not mean you’re automatically a great fantasy option. In fact, for RBs, the opposite appears to be true (with only a few exceptions).

Let’s dive back in to the FTN Data to find the 10 most consistent fantasy RBs from last year (more on the methodology below). Wednesday, we will show the 10 most volatile RBs.

“Consistency” is easy to generally define, but nailing down a methodology for fantasy football purposes requires arbitrary decisions that aren’t easy to defend. So instead of picking something random, I used standard deviation, which measures how far apart all of the data points in a set are from the set’s average.

Lower standard deviation means all the individual data points in a set are close to the average. Higher means more spread out.

We found a group of 60 RBs to analyze for this study by taking all RBs who played at least eight games and then taking the top 60 based on fantasy PPG.

Then we ranked those 60 RBs from most consistent (below) to least consistent/most volatile.

The chart above stops at Week 17, otherwise Latavius Murray probably wouldn’t have been No. 1 on this list after his random 150-yard, 1-TD outburst in Week 18. He’s a free agent as of this writing, but he’s still 32 and likely to land on some RB-needy team in August or September.

The reason almost nobody is excited about Josh Jacobs in 2022? It’s because he ranks No. 2 on this list. Yes, 15 fantasy PPG is not bad. He had a solid floor, scoring at least double-digit fantasy points in all but one game last year. He seemed automatic in that 10-15 range. Jacobs is the prime example of consistency not always being exactly what you want in fantasy.

Miles Sanders not scoring a single TD last year has to be one of the most amazing stats of the 2021 season. He’s coming off draft boards in the RB25-RB30 range, but even that might be optimistic with people expecting him to get on the right side of TD variance. The chart above is brutal and not what you want in fantasy.

The Raiders decided to pair the second-most boring RB in fantasy (Jacobs) with the fourth. Brandon Bolden’s exact role with the Raiders is TBD — Will he even play much on offense, or will he mostly be a special teams body? — but he’s not a name you need circled on fantasy draft day.

The Eagles having two of the five most boring — sorry, I mean consistent — RBs for fantasy last year makes perfect sense. Jordan Howard is currently a free agent but will likely be on an NFL roster at some point in 2022. He’s the next Latavius Murray.

When he was actually used last year, Mike Davis was a slightly worse version than Josh Jacobs. So it makes sense to see him on this list. In 2022, Davis goes to the Ravens, who are expecting J.K. Dobbins and Gus Edwards back from injury. Davis won’t be fantasy relevant unless both of those players are slow to return and/or get hurt again.

Tony Pollard seems to be the darling of every fantasy analyst, and it might seem a little surprising to see him on this top 10 list given that we love him because of his “upside.” But he’s on this list because he never got to truly show off that upside last year due to Ezekiel Elliott playing the entire year.

Pollard being on this list is actually encouraging. It shows that he has consistent, standalone value as one of the best “handcuffs” in fantasy football. If Pollard needs to be in your flex, it won’t kill you. However, his true upside remains in the event Elliott gets hurt.

Zack Moss started 2021 on fire, but then he was relegated to a role that rendered him a fantasy non-factor. Devin Singletary came on strong down the stretch last year, and Buffalo added James Cook as a change-of-pace back. Moss will probably still have a roster spot as Singletary insurance, but there’s nothing really to look at here.

The reason many fantasy analysts love D'Onta Foreman this year is because A) Christian McCaffrey has spent much of the last two years injured and B) He was actually decent while filling in for Derrick Henry over the second half of last year.

Ty Johnson actually had a decently side range of outcomes — scoring over 17 fantasy points twice — but he was closer to his floor (3-5 points) so much more often the his outbursts didn’t move the standard deviation needle enough to kick him out of the top 10. With Breece Hall now on the Jets, Johnson is a name you can forget for the time being.