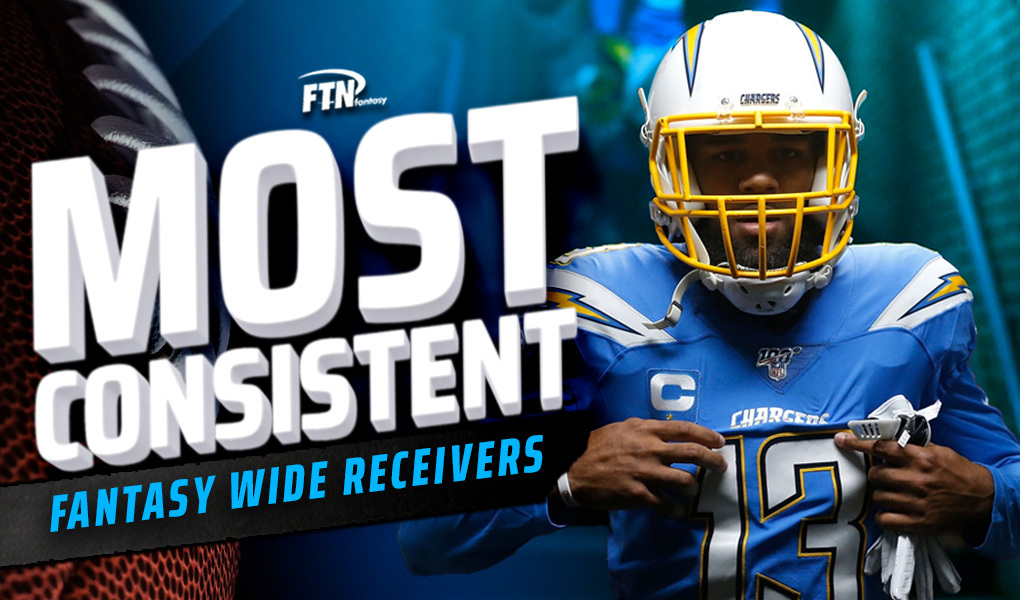 FTN's Tyler Loechner recounts the most consistent fantasy football receivers of 2021 and looks into whether consistency is a positive or negative.

"Consistency is key!” is something you’ve probably heard or thought while playing fantasy football. If you have a roster full of predictable players, it feels a lot safer, and you know you’ll always have a fighting chance.

But is consistency overrated in fantasy football?

Generally speaking: Yes — because its usual cost is a ceiling.

I dove into FTN Data to find the 10 most consistent fantasy WRs from last year (more on the methodology below). Wednesday, we will show the 10 most volatile receivers.

Something tells me you’ll like the list of volatile players more. But our list of top 10 most consistent WRs shows that consistency is not a bad thing. We see some elite fantasy WRs show up in the rankings below. But we also see some ho-hum flex fillers.

“Consistency” is easy to generally define, but nailing down a methodology for fantasy football purposes requires arbitrary decisions that aren’t easy to defend. Was consistency the number of weeks finishing as a top-20 WR? Or scoring at least 15 fantasy points?

The only thing I did arbitrarily was find the 60 players to analyze. I only took WRs who played at least half the year in 2021 (so 9-plus games), and then I took the 60 top WRs from that group based on fantasy PPG. I chose 60 because it covers most of the fantasy-relevant names.

Then we ranked those 60 WRs from most consistent (below) to least consistent/most volatile.

Michael Gallup, one of the biggest winners of the offseason and my favorite WR sleeper for 2022, came out as the most consistent fantasy football WR in 2021 — and I swear I didn’t alter the results to make it happen.

The chart above explains most of it. Gallup’s performances were all along the beam of his tight distribution band. The point totals are not impressive, but they have a serious likelihood of shooting up with Amari Cooper and Cedrick Wilson both gone. Gallup just needs to be fully healthy first.

Keenan Allen should be the poster child for “consistency” in fantasy football. He not only finished as the second-most consistent WR last year — but he also ranked top 10 in points on a per-game basis. Most (not all) of the other names on this list are players that didn’t score nearly as many fantasy points.

For a player like Allen, however, consistency becomes much more valuable.

It makes a lot of sense to see Jakobi Meyers’ name so high on this list. But he’s also an excellent use case of why “consistency” might not be what you want to shoot for in fantasy football.

For example, let’s say Meyers scored a more respectable 7 TDs instead of the 2 he actually scored. In this scenario, his average per game rises to 13.8 and his standard deviation rises to 5.9, which is still very low, but it would rank outside of the 10 lowest.

So Meyers would become less consistent but better in fantasy.

Diontae Johnson was terrific last year. His 169 targets were third among WRs and he was incredibly consistent with his production. Johnson was basically the boujee version of Jakobi Meyers. When your floor is as high as Johnson’s, consistency becomes much more attractive.

Rashod Bateman was the only rookie from last year to rank in the top 10 in consistency. He landed on the “consistency but with a low floor” grouping — not where you want to be exactly — but the majority of the players on this top 10 list are good, so I’d say it’s good company and a solid base to jump from heading into Year 2.

The Ravens shipped off Marquise Brown and his 145 targets, opening up a huge door for Bateman in 2022.

Jarvis Landry has been the model of consistency his entire career. Now he lands in New Orleans on a one-year deal where he has supposedly been the best receiver in mini-camps. Granted, Michael Thomas hasn’t been there — but that’s because Thomas appears to not be fully healthy still (there’s another story).

Just looking at Tim Patrick’s chart, I’m a little surprised to see him rank in the top 10 in consistency. At a glance, it looks like he was consistently at 13 points the first half of the year and then consistency at 4 the second.

In fact, only one of Patrick’s 15 games falls within his standard deviation band. But all the others are so incredibly close, that he basically just followed two beams in 2021.

After seeing Landry and Meyers check into the top 10, it’s really no surprise to see Jamison Crowder follow suit. He slides into the Cole Beasley role in Buffalo, which has proven to be valuable with Josh Allen in the past. Don’t sleep on Crowder.

Was Stefon Diggs’ consistency what caused him to feel underwhelming last year? He’s still a top-five fantasy WR for 2022 drafts, but there does appear to be an aura of “boring-ness” about him heading into 2022 that wasn’t there in the past. I’m convinced this is it.

But like some others we’ve highlighted here, Diggs’ high floor made his consistency last year a good thing. However, we only saw his roof-off ceiling once (30.2 points in Week 10). This helped his consistency score but hurt his total points potential (Diggs scored -28.7 expected fantasy points).

Here’s a name I was not expecting to see here. I think we can chalk this one up to “low floor, low ceiling” syndrome. The Saints drafted Chris Olave and added Jarvis Landry, so Deonte Harty's path to a breakout of some sort is unlikely.