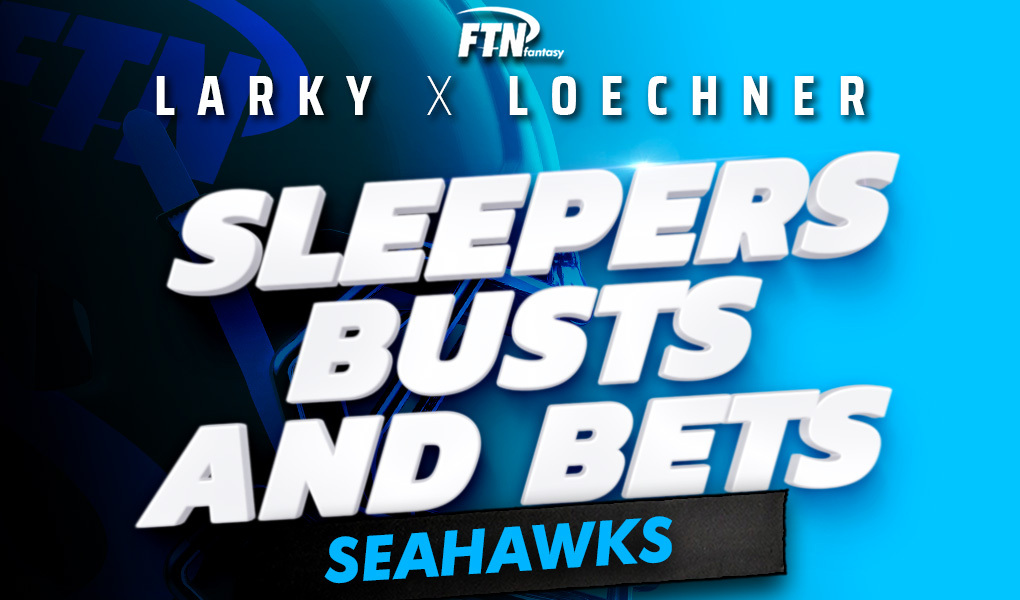 FTN's Tyler Loechner and Josh Larky offer up their picks for key names and situations to know for fantasy football on the Seahawks in 2022.

Tyler Loechner and Josh Larky continue with the 2022 Sleepers, Busts, and Bets series to preview all 32 NFL teams for the upcoming year. Next up: The Seattle Seahawks.

Rashaad Penny is going outside the top 35 RBs drafted right now. Rookie Ken Walker is already going inside the top 30 at the position. Basically, everyone already expects Penny to take a back seat to Walker.

I’m not convinced that will happen.

Penny was nearly invincible down the stretch last season, posting overall weekly finishes of RB3, RB9, RB1 and RB4 all in the final month of the year. He ripped off over 130 rushing yards in four of his final five games with at least a TD in all of those games.

This is a team that was already slow (league-low 954 offensive plays last year) and run-heavy (43.3% run rate, ranked in the top half of the league). And now they just shipped off Russell Wilson, re-signed Penny, still have Chris Carson, and spent a high draft pick on Walker.

In other words, the Seahawks are still likely to be a run-first team. Penny will get the first crack at it. The upside (top-10 or top-15 RB) is as good as you can find for a player going as late as he is.

Yes, there’s competition. Yes, his run of success was a small sample size. But he also forced the team to pick up his fifth-year option. Seattle may simply run him into the ground in 2022 before moving on to Walker. I’m buying at this price.

Rashaad Penny led the NFL in yards per carry and explosive run rate in 2022. Over 15% of his carries went for at least 10 yards last year. He started the final five games of 2022 and averaged 134 rushing yards per game, topping 135 rushing yards in all but one of those final five contests.

Penny has struggled with injuries throughout his career, but he’s a former first-round pick who clearly still has enough juice in the tank after putting up one of the most historic five-game stretches in NFL history to close out 2021. The Seahawks have already said Penny will get first crack at being the team’s starting RB, and Penny goes multiple rounds later than Ken Walker in drafts.

All else equal, I even prefer Penny over Walker, as a healthy Penny is the definite touch leader in this backfield on a weekly basis. The 2022 ceiling is much lower than his 2021 output as Russell Wilson is now in Denver, but if you’re forcing me to draft a Seahawks player, I’m taking the starting RB on a run-first offense who could see 20 touches per game anytime he’s healthy.

The Tyler Lockett splits with and without Wilson last year were rough. It looks fine when you just look at receptions and yards, but Lockett averaged 0.62 TDs per game with Wilson compared to 0 without him. The result was 83% fewer fantasy points per game in standard leagues and 37% fewer fantasy PPG in PPR leagues.

Lockett is also arguably the best deep ball receiver in the league. Last year, a league-high 21% of his targets came 20-plus yards down the field. He caught 80% of those passes for a league-high 730 yards and 6 TDs (second most).

But now Lockett downgrades from Wilson (38% completion rate on deep balls) to Drew Lock (29%). Lockett’s ADP is extremely low (he’s currently going outside the top 40 WRs), and if his price stays in that range, he’s not a complete avoid. But when more casual leagues start drafting and Lockett’s ADP undoubtedly rises, don’t take the bait.

Ken Walker was a two-down grinder back in college, never reaching a 6% reception share of his college offenses. He’s only 211 pounds, so unlike Derrick Henry or Nick Chubb, he probably cannot consistently hold up to a 20-carry workload during NFL games. Some point to the college scheme — the teams he played for hadn’t historically targeted the RB position — but I struggle to envision Walker becoming a pass-catcher in 2022, as the Seahawks have not historically targeted the RB, either. Drew Lock and Geno Smith are mobile enough, and the receivers are strong enough options, that the Seahawks are unlikely to check the ball down frequently. Walker has an uphill battle to those valuable - for fantasy football - RB targets, and his mid-sized frame suggests he likely won’t handle more than 15 carries per game.

You’re threading the needle if you want Ken Walker to be highly fantasy relevant in 2022. He will need a Rashaad Penny season-ending injury, for either Lock or Geno to become a good NFL QB, for Pete Carroll’s playcalling to enter the 21st century, and the coaching staff being blown away by his receiving chops that they dismiss his lack of college production and begin to feature him in the receiving game.

I see a tiny path for Walker to make a difference in fantasy football in 2022, so I’m staying away from him in drafts.

Noah Fant was the butt of jokes as he was the doomed party who almost upgraded from Drew Lock to Russell Wilson, only to realize he was part of the deal, too. But I think you can argue Fant received an upgrade here.

Yes, his QB still stinks, but he no longer has Albert Okwuegbunam to contend with out of the TE position, and the targets in Seattle are largely up for grabs after DK Metcalf and Tyler Lockett gobble up their combined 50%.

Fant was a fantasy TE1 in 44% of his games last year and finished as the overall TE12. He has now been a top-15 fantasy TE in all three years in the league, including two straight years within the top 12.

Yet he’s being drafted as the TE21 right now despite a sidegraded situation at worst. What gives?

Last year, only the New York Giants and New York Jets failed to have a single player reach 200 fantasy points. However, in both cases this was due to injury, as Zach Wilson and Daniel Jones both missed significant time. In 2022, the Seahawks will reach this “milestone” thanks to Geno Smith and Drew Lock each starting a handful of games, coupled with Pete Carroll’s archaic, run-first playcalling.

I do not want any Seahawks players on my fantasy teams in 2022. A run-first offense that is unlikely to score many TDs will sap the fantasy value of the non-pass catching grinder backs and lacks the volume — or competent QB play — needed to keep DK Metcalf or Tyler Lockett afloat in fantasy football.

We as fantasy analysts are very good at knowing which offenses will succeed or struggle to start the year, and fading an elite real-life NFL talent like DK Metcalf reminds me of last season, when I faded DJ Moore. No matter the talent, if you want to score fantasy points in the modern NFL, you need at least one of respectable playcalling or a viable QB. The Seahawks have neither.