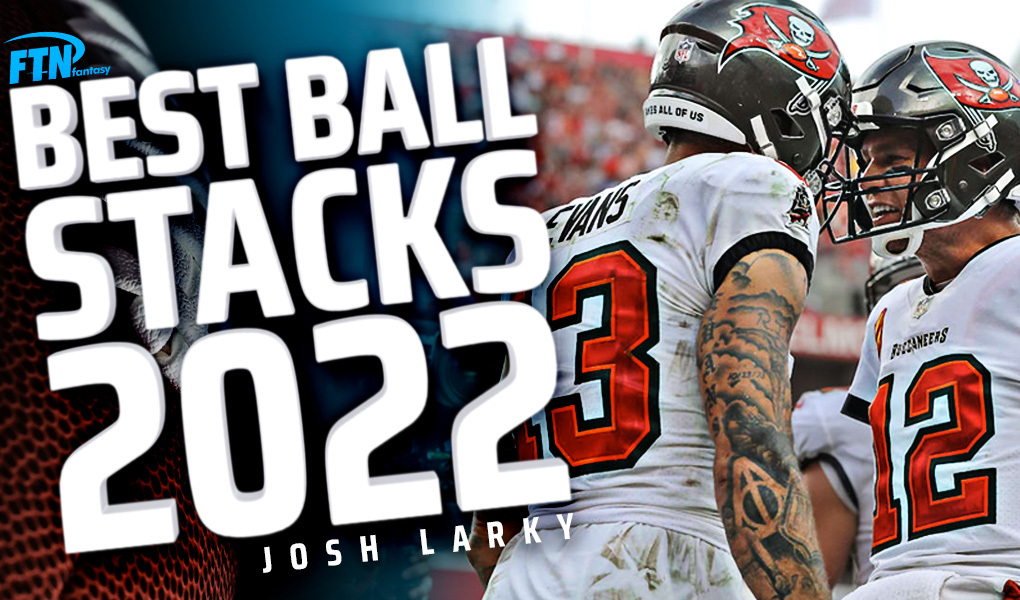 FTN's Josh Larky picks out four of his favorite stacks to target in best ball drafts for the 2022 fantasy football season.

“Josh, give me some stacks to target in my 2022 best ball drafts already.”

This is that article.

I’m going to keep it simple:

If you want to better understand the full structure of Underdog’s Best Ball Mania tournament, I lay it out in detail in my Art of the Stack guide in the “Tournament Structure” section.

For the purposes of win rate in this article, I’m defining it as the percent of teams advancing to Round 2 of the tournament. The top two teams from each 12-person draft room advance to Round 2, meaning it’s 1-in-6, or 16.7%. This is our baseline win rate that we want to compare our stacks against.

The four stacks I highlight from 2021 all greatly exceeded this threshold, and I believe their 2022 analogs have that potential, too.

Finding the Next Matthew Stafford-Cooper Kupp

Matthew Stafford-Cooper Kupp was the holy grail of stacks from last season. Teams that drafted Kupp went from a 1-in-6 chance of advancing to a coin flip, as 48.2% of Kupp teams advanced in the tournament.

However, teams that stacked Stafford and Kupp advanced 53.6% of the time, benefiting from the correlated outcome of both players exceeding their ADP.

The stack analog for 2022 is Russell Wilson and Courtland Sutton. Aside from Wilson following the Stafford path of leaving a broken franchise to join a team on the rise, Sutton is not viewed as his team’s best fantasy option, much like Kupp in 2021.

While tough to harken back to summer 2021, the masses were drafting Robert Woods a half round before Kupp in fantasy drafts. This year, the 2022 Woods is Jerry Jeudy, and the 2022 Cooper Kupp is Courtland Sutton, at least as far as ADP is concerned.

Ultimately, I drafted more Kupp due to the decreased cost, and I have been doing the same in early 2022 best ball drafts by waiting an extra round to stack Sutton with Russell Wilson. Sutton runs a route tree that consistently features some of the league’s deepest targets, and we’ve seen Wilson’s propensity for the deep ball the past few seasons. There’s a reason Wilson is the only QB in the NFL to sport a 6% or higher TD rate each of the past 5 seasons, and I’m incredibly confident this Denver passing game will pop in 2022.

While not quite as dominant as the 2020 version that completely broke fantasy — much like 2021 Stafford-Kupp, Aaron Rodgers-Davante Adams was once again a deservedly coveted stack in best ball last season.

Teams drafting Adams advanced 21.6% of the time to Round 2, still nearly 30% above the 16.7% baseline. However, pairing Rodgers with Adams led to a slightly higher 23.3% advancement rate, even though Rodgers on his own was not a big difference-maker in fantasy.

Again, the power of correlation via stacking!

Davante Adams is an incredible talent, but also benefited from a hollowed-out depth chart. Allen Lazard and Marquez Valdes-Scantling are not close to Adams’ talent profile.

I wanted a proven connection for the 2022 analog, where this QB-WR duo have played together for at least three seasons. And I wanted a track record of elite ability.

This one may surprise you, but Ryan Tannehill and A.J. Brown fit this mold. Before you cast me off fantasy island for talking about the Titans’ pass attack, Brown’s 2021 season was marred by injuries, and Tannehill was throwing to Nick Westbrook-Ikhine far too often while D’Onta Foreman was in the backfield.

Both players deserve a fantasy mulligan in 2022, particularly after both still received elite PFF grades above 83.0 during the 2021 season. Like Adams in 2021, Brown will be competing for targets with a rough cast, basically post-ACL tear Robert Woods and a motley crew behind that. And despite the injuries, Brown posted the best target share and team air yards share of his career in 2021.

Think of this like the budget Rodgers-Adams connection, as Tannehill goes as the QB20 and Brown is the WR9 on Underdog. Yet Tannehill was the QB9 per game in 2020, and Brown was the WR5 per game that year as well. Stack Tannehill-Brown, knowing you’re buying the 2021 injury discount.

Finding the next Justin Herbert-Mike Williams

Justin Herbert was entering Year 2 in the NFL a season ago, and he seemed like a fairly obvious candidate to take a significant leap forward after his promising rookie season. Mike Williams was a player the fantasy community had grown tired of, as his lack of consistency and fantasy production in his first three seasons left much to be desired.

In no way was this a desired stack in 2021, yet Herbert finished as the QB2 per game and Williams the WR16 per game in half-PPR scoring like Underdog. Mike Williams teams advanced well above the 16.7% baseline, at a 29.2% rate, and Herbert teams were nearly identical, at a 29.1% advancement rate. The advancement rate skyrocketed to 41.8% when stacking Herbert-Williams to further highlight the fruits of a stack that pays off.

For the 2022 analog, I sought out another stack that nobody is excited for, one that involves a Year 2 QB with a WR going outside the top-30 at the WR position.

Those who follow me on Twitter know my strong affinity for second-year signal caller Davis Mills and his natural stacking partner, Brandin Cooks. It’s tough not to come away impressed after Mills’ rookie season.

He was a third-round pick, not because of a lack of arm talent, but due to only starting 11 games during his time at Stanford. There were eight games where a rookie QB had 300 or more passing yards in 2021, and Mills had four of those, while Trevor Lawrence and Mac Jones each added two of their own.

In best ball, we are searching for spike weeks, and the Texans’ defense projects to be well below average in 2022. Mills is sure to face many negative gamescripts once again, and we should all get used to the 300 passing yards with multiple touchdowns stat line from him.

After Tyrod Taylor was benched mid-way through Week 13, Mills started each of the next five games. In those, he completed over 68% of his passes, boasted a 9-2 TD-INT ratio, upset the Chargers, and averaged 17.8 fantasy points per game, which would have been QB13 over the full 2021 season. Cooks played in 4 of those games, and his 15.5 half-PPR/game average would have been the WR7 over the full 2021 season.

Yes, this is a small sample size, but both the QB and WR go outside the top-30 at their positions. I’m going to draft an above average amount of Mills and Cooks, knowing both Mills’ passing and the Mills-Cooks connection should only improve heading into Year 2.

Finding the Next Tom Brady-Mike Evans

This duo was lighting it up almost every single week — Tom Brady leading the league in pass attempts, yards and touchdowns, with Mike Evans chipping in over 1,000 yards and 14 touchdowns himself. Brady drafters advanced 31.5% of the time into Round 2, and Evans drafters came in at 30.3% — both well above the 16.7% (1-in-6) baseline. Together though, a whopping 44.0% of Brady-Evans stacks survived Round 1 of the Best Ball Mania II tournament.

This was a stack I faded in 2021, opting to stack Brady with Antonio Brown and Rob Gronkowski far more often. My concerns felt legitimate at the surface: Brown and Gronk were far better “values” at ADP based on projected fantasy points per game. Those two usually outproduced Evans when healthy, but both were aging players with health/mental health concerns from a fantasy perspective.

A lesson learned from 2021: Never fully fade pieces of an offense we know is going to be elite. I had Tom Brady on a massive amount of best ball teams last year, as I loved his projected volume and the weapons he was paired with.

For 2022, there’s an even better version of Brady-Evans, and I won’t be fading this year’s version like I did last season.

The 2022 version of Brady-Evans just so happens to be Tom Brady and Mike Evans. Shocker!

Brown and his massive target share are gone. Rob Gronkowski continues to remain non-committal on his NFL future. Chris Godwin tore his ACL late last season. The team brought in Russell Gage, who is a fine player, but most definitely not the caliber of Antonio Brown.

I understand targets are earned, and Evans’ target share has dipped below 20% the past two seasons. But he’s the rare case of a talented player who just happens to be part of the best WR trio in NFL history (Evans/Godwin/Brown), as well as a future Hall of Fame TE (Gronk). We caught a glimpse last year — when Godwin and Brown weren’t playing — of whether or not Evans could command high volume like his earlier years.

That answer was an emphatic yes. Evans had 26 targets in the Buccaneers’ two playoff games, good for a 28.6% target share. We could once again see Evans’ target share climb back around 20% for 2022, and if Brady is once again throwing the ball over 700 times, that’s around 140 Tom Brady Targets. They’ll be accurate, and a significant amount of them will be in the red zone.

Stack Brady and Evans with supreme confidence in 2022.

I’ll be back soon to highlight more players and stacks to target in your drafts, as well as some players I’m fading heavily at their ADP. If you can’t get enough best ball content, be sure to check out the best ball rankings from Jeff Ratcliffe and me.