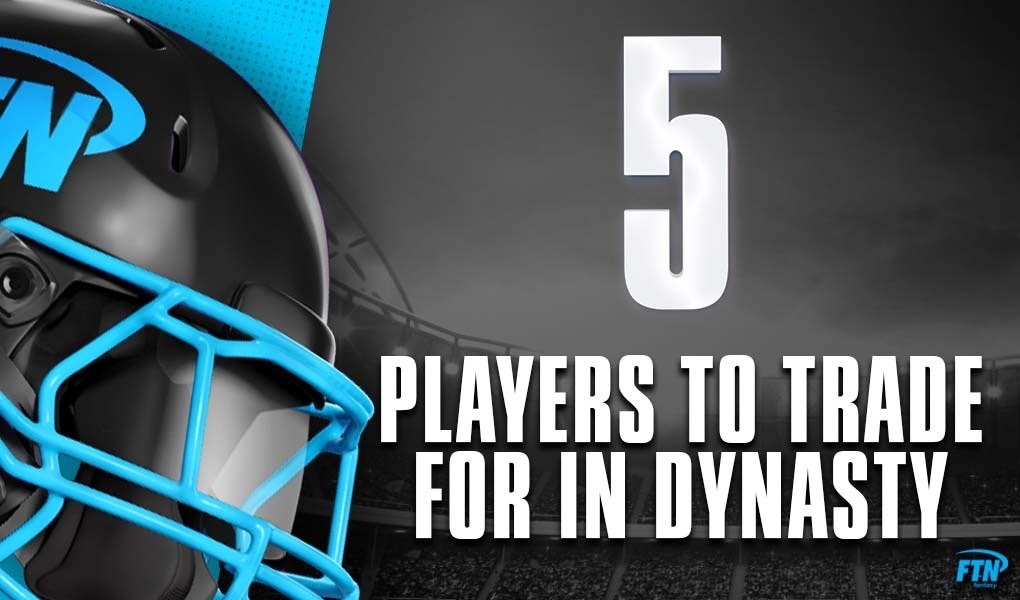 5 Players to Trade For in Dynasty This Offseason

Dynasty fantasy football seasons never end. It’s one of the many things people love about dynasty leagues. With an epic 2022 free agent class coming up, and the NFL Draft now on the horizon, let’s take a look at five players to trade for this offseason in dynasty.

Justin Fields’ rookie campaign felt like a true mixed bag. He couldn’t beat out Andy Dalton for the starting job until an injury landed Dalton on the sideline. And even when Fields did play, the Bears' passing offense ended up feeling worse than when Dalton was on the field.

Yet Fields was actually good in fantasy once he got more comfortable. He finished as a fantasy QB1 in the final four games in which he played the whole game, scoring at least 21 fantasy points each time out.

Yes, he has been hurt in back-to-back seasons, but win-now teams should 100% trade for Christian McCaffrey. In his four fully healthy games in 2021, McCaffrey scored 27.7, 24.7, 26.1, and 24.9 fantasy points in PPR leagues. He did all of that while only scoring two total touchdowns in those games.

He’ll still only be 26 when the 2022 season starts, and his value - while still not likely to be cheap - will probably never be lower (at least until he looks truly cooked). For now, though, McCaffrey has just been on the wrong side of injury variance. He suffered no massive injury in 2021, like an Achilles or ACL tear, and there’s no reason to think he won’t be healthy in 2022.

Ezekiel Elliott does not seem long for the world of Dallas. Tony Pollard, who has been second on the depth chart all year despite looking flat-out better in every ball-handling aspect of the game, is waiting in the wings. He’s not incredibly young - he’ll be 25 when next season starts - but he’s still young enough to offer a few years of elite running back play for your dynasty squad.

Pollard is a gamble for dynasty because there’s no guarantee Elliott will be truly phased out as soon as 2022, but the good news is that Pollard has a weekly role in Dallas that’s viable for fantasy even with Elliott. You’d be buying a solid floor with top-five upside.

Chase Claypool had a disappointing 2021 season. But it wasn’t objectively bad. He straight up didn’t score touchdowns this year, which we know are a volatile stat category. But Claypool’s non-TD stats across the board matched his impressive rookie season:

If you liked Claypool a lot entering his sophomore season, you should probably like him just as much entering his third year - with the added bonus that he’s going to be a lot cheaper to acquire. It’s actually amazing that Claypool averaged nearly 15 yards per reception with Ben Roethlisberger throwing the ball this year. Big Ben’s average depth of target was 6.7, second-lowest among full-time starting QBs (Jared Goff posted a 6.37).

We know Claypool has a nose for the end zone - it’s not like his strong rookie season didn’t happen - and he’s still just more targets away from a true breakout season. The underlying upside is still very much intact.

Toney’s dynasty value was a rollercoaster this year. He went from cheap, to expensive during his mid-season breakout, to cheap again after he completely fell off the map. But it was injury, not poor play, that saw Toney’s rookie season get derailed. The Giants’ quarterback “play” - if you can call it that - was also disastrous in every way.

But Toney went 9-6-78-0 in Week 4, then he went bananas for 13-10-189-0 in Week 5, then he started Week 6 with 3 receptions for 36 yards on the first drive before an injury effectively ended his season. He saw the field again in late November (12 targets) and late December (9 targets), but the lousy quarterbacking and long layoffs rendered him ineffective. Still, his 21 targets in his final two games are impressive.

If you’re hunting for diamonds in the rough, it doesn’t get more tantalizing than double-digit target upside and a player with an already-proven high ceiling. 189 yards as a rookie is nothing to scoff at.