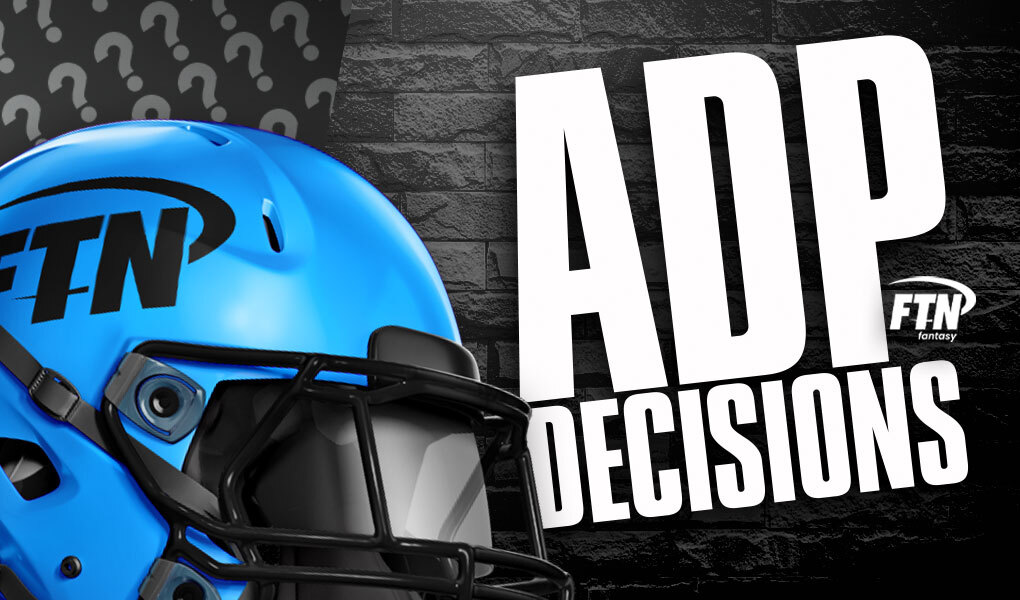 FTN's Adam Pfeifer puts two wide receivers going close to one another in 2021 fantasy football drafts so far under the microscope to determine who makes the most sense.

(All summer, Adam Pfeifer will be putting the tightest fantasy football picks under the microscope in our ADP Decisions series.)

We continue our ADP series with a look at two receivers being selected right next to each other in that WR17-20 range. Adam Thielen is coming off a tremendous season, as he found the end zone at a whopping rate. Meanwhile, Chris Godwin missed some time in 2020 but when he was on the field, he was once again very productive.

So which receiver should be on your radar in drafts this summer? Let’s break it all down.

The case for Chris Godwin

Godwin had a bit of an interesting season in 2020, catching 65 balls for 840 yards and seven touchdowns. He missed four regular-season games due to injury, as he dealt with a hand injury and concussion. However, Godwin was still pretty efficient, ranking top five in the league in catch rate (77%), while his 12.92 yards per target was good enough for 11th among receivers with at least 50 targets. And while his overall numbers obviously weren’t as fantastic as many hoped prior to the season, Godwin was still the WR15 in PPR points per game (15.9), just ahead of teammate Mike Evans (15.2). He finished the season very strongly, scoring four touchdowns during the final three games of the season, including a 5-133-2 effort in Week 17 when Evans only logged 16% of the offensive snaps.

A huge talking point around this Tampa Bay offense is the fact that there may be “too many mouths to feed.” And sure, the Buccaneers are loaded with offensive talent, featuring Evans, Godwin, Antonio Brown, Rob Gronkowski, O.J. Howard and three capable running backs. However, the passing volume was there last season, as Tampa Bay averaged 38.2 pass attempts per game, seventh in football. But let’s look at the wide receiver targets once Brown joined the team in Week 9. From Week 9 on, Brown and Evans led the team with 62 targets, while Godwin was third with 54 looks. His target share during that span was under the 20% mark, which isn’t a very enticing number for a top-15 wide receiver. The team began to manufacture looks for Brown, as 30.6% of his targets came off screens. As a result, Godwin didn’t see massive target totals as often, posting six targets or less in five of his last eight games. Still, there is plenty to like about Godwin, who will remain in the slot, where he hauled in nearly 86% of his passes last year, a top-five rate in football. And we know Tampa Bay is going to be a top-tier offense, as they finished third in red-zone scoring trips per game in 2020 (4.0). He shouldn’t be drafted as a WR1 like he has been the last two seasons, but Godwin remains a rock-solid WR2.

The case for Adam Thielen

This time last season I was telling everyone on the planet to draft Thielen in fantasy. He was undervalued as the clear top option in this Minnesota passing offense. And while the year didn’t exactly go how I planned, Thielen made me look smart, finishing as the WR10 in PPR leagues on the strength of his 14 receiving touchdowns, which trailed only Davante Adams and Tyreek Hill. I did not expect rookie Justin Jefferson to be as dominant as he was right away, as he surpassed Thielen as the top target. As a result, Thielen’s target totals were a bit underwhelming after Jefferson broke out in Week 3, as the veteran wideout was 30th in the NFL in targets from Week 4 on. He was also 24th in receiving yards during that span, while failing to reach 1,000 yards on the season. Still, Thielen delivered in the touchdown department, as his 20 end zone targets paced the entire league, while he saw 51% of the Vikings end zone targets, which also easily led the league.