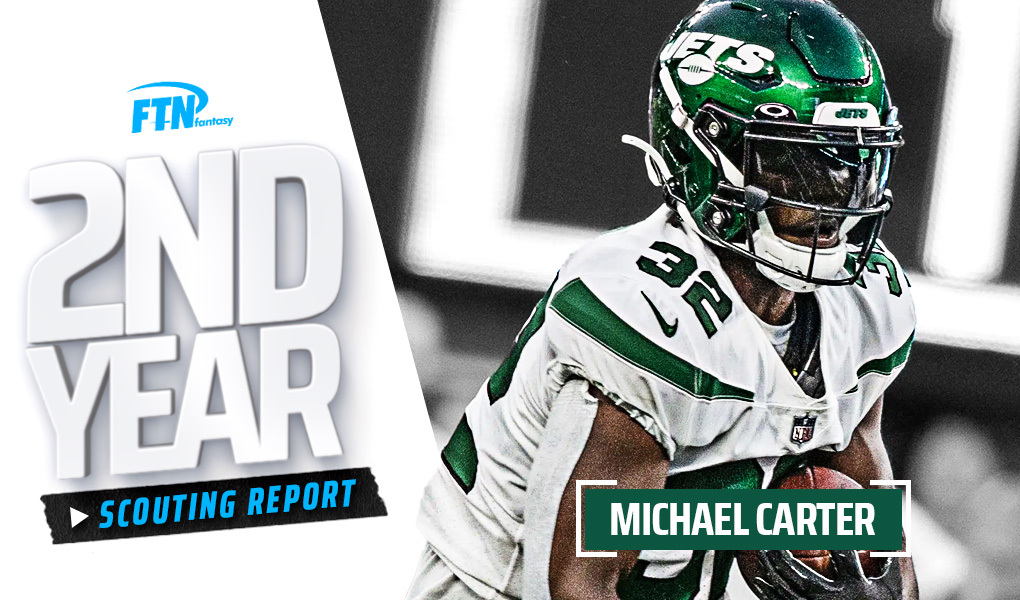 FTN's Jeremy Popielarz dives into the outlook for the Jets' running back as we head toward his second season in the NFL.

Rookies get all the attention. They’re the flashy new piece that could be anything. And then a class of rookies comes through and they’re old news, replaced by the next flashy, new thing. But last year’s rookies aren’t gone, and in many cases, they’re going to be even better than the exciting new pieces that are just showing up.

Follow along with the whole Second-Year Scouting Report series here!

Michael Carter was drafted with the 107th overall pick in the 2021 NFL Draft. At the time of this selection, it appeared he would step in as an immediate impact role due to the shallow depth chart for the Jets. After a career at North Carolina where he was in a split role with Javonte Williams, producing 3,404 career yards, having a shot at a full-time role was a bit of a surprise. He had been seen as a player who lacked creativity to force missed tackles on the second level and didn’t have top-end speed to break big plays, especially after stacking multiple cuts.

On the other hand, he had back-to-back 1,000-yard rushing seasons in 2019 and 2020 despite splitting time. He was very patient and adept at getting north-south in a hurry after one cut. He had excellent ball security as well, with no fumbles to his name in 2019 or 2020.

Fantasy managers were high on Carter a year ago, taking him at a 12.6 ADP in rookie drafts, the RB4 after Najee Harris, Williams and Trey Sermon. In redraft leagues, Carter was a seventh-rounder, the RB33 in the range of guys like AJ Dillon and Leonard Fournette.

As a rookie, Carter did not earn a workhorse role initially, nit he did flash in his limited role. He produced seven weeks of double-digit PPR points, including one RB1 weekly finish with 32.2 PPR points in Week 8. A majority of these points came via the passing game, as he had three games over 5 targets en route to 55 targets total in 2021. He caught 36 of them for 325 yards, accounting for 68.5 points — 44% of his points. Additionally, he showed decent elusiveness, as he forced 56 missed tackles (36 on rushes, 20 on receiving plays) while earning a 103.4 elusive rating, per FTN’s elusive rating tool. This was the best in the league among running backs who saw at least 100 carries and 20 receptions.

The Jets struggled with injuries as a team in 2021, and that included Carter, who missed Weeks 12-14 with an ankle sprain. After his return, he struggled, producing three single-digit fantasy games in four weeks to end the season. On the flip side, he did rush for his first 100-yard game in Week 16 against the Jaguars, his first game over 70 yards rushing since Week 8. This was no surprise as Carter only saw 147 carries (10.5 per game) on the season (this led the Jets). Carter was also stuck in a split backfield, as Tevin Coleman (84 carries) and Ty Johnson (61) saw plenty of work as well. Carter also only found the end zone four times as a rookie, all of them before Week 10, limiting his fantasy upside.

Despite Carter having a somewhat impress rookie season, the Jets doubled down, drafting Breece Hall in the second round of this year's draft. Hall is projected to be a workhorse back who can play on all three downs. In other words: RIP to Carter’s fantasy value — as long as Hall is healthy, Carter’s ceiling this season is a talented handcuff who might offer a bit of pass-catching value. And with a current ADP of RB35, he is also very pricy for what his role likely is, making him a player to avoid this season. If his ADP drops, it would be a different story and make him a perfect stash-worthy running back for 2022.

For dynasty, Carter becomes more intriguing. As I laid out above, he is a fairly high-end handcuff, but these are the perfect running backs to target in dynasty formats. They round out your bench nicely and carry huge upside. That said, even though Carter has stash-worthy value, I am not looking to pay a premium for him.