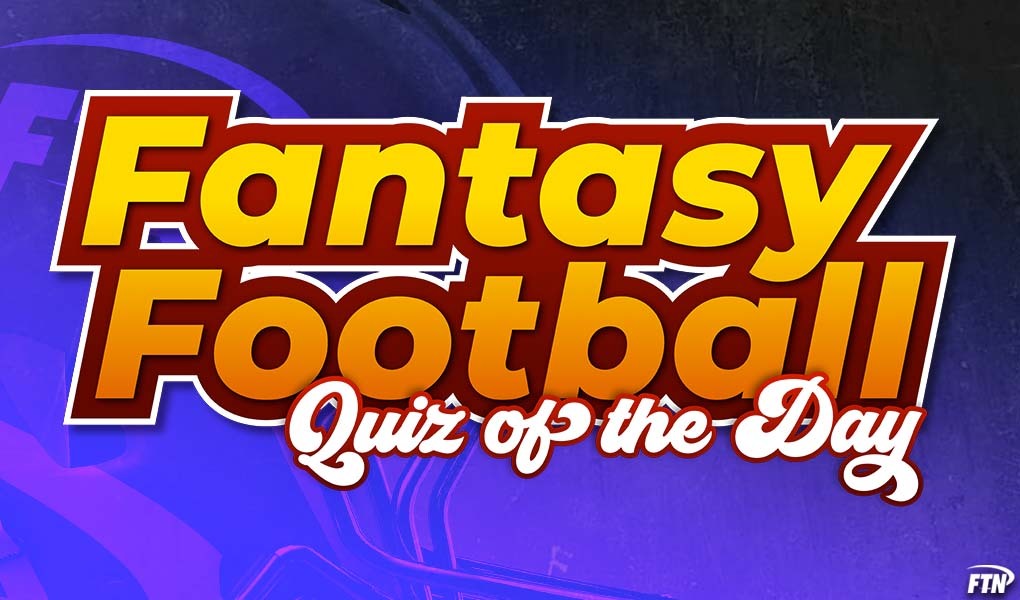 Think you know everything about fantasy football? Take our daily quizzes and test your knowledge!

Even in the offseason, we have fantasy football on the brain. So while there are no games to analyze, we thought it would be fun to offer up a few brain-teasers. These are our fantasy football quizzes.

Weekly winners? Most points ever? Who did what the best? Follow along as each day we tickle your memory with some of our top questions.

These are our daily fantasy football quizzes. Put your knowledge to the test.

May 31: The Top-Scoring Tall Guys

May 30: The Unluckiest Active Receivers

May 27: Most Career First-Team All Pros, Active Players

May 25: Longest Active Streaks of at least 1 TD Pass

May 23: Longest Average Touchdown Length in 2021

May 18: Which Teams Have Employed Josh Johnson or Ryan Fitzpatrick?

May 17: The Best Fantasy Season in Each Team's History

May 13: The Active Players with the Longest 100-Yard Game Streaks

May 12: The Best Playoff Fantasy Games of the Last Decade

May 11: The Active Leaders in Playoff Fantasy Points

May 9: Longest-Tenured Player on Each NFL Team

May 5: Every Team's Active Passing Leader

May 4: Every Team's Active Receiving Leader

May 3: Every Team's Active Rushing Leader

April 28: Which Teams Have Picked First Overall in the 2000s?

April 20: The Longest Touchdowns of the 2021 Season

April 18: Most PPR Points in a Season By Age

April 15: Every Active Player with a No. 1 Fantasy Finish

April 7: Every 250-Yard Receiving Game Since the Merger

April 5: Every Season with 40+ Passing Touchdowns

April 4: Most Years Between First and Last Seasons of 1,000 Rushing Yards

March 22: Every Player Who Has Caught a TD from Tom Brady

March 17: Best First Fantasy Season of a Career Since the Merger

March 16: Best Final Fantasy Season of a Career Since the Merger

March 15: Active QB/Pass Catcher Duos with the Most Touchdowns

March 14: The Most PPR Points in the First Year with a New Team