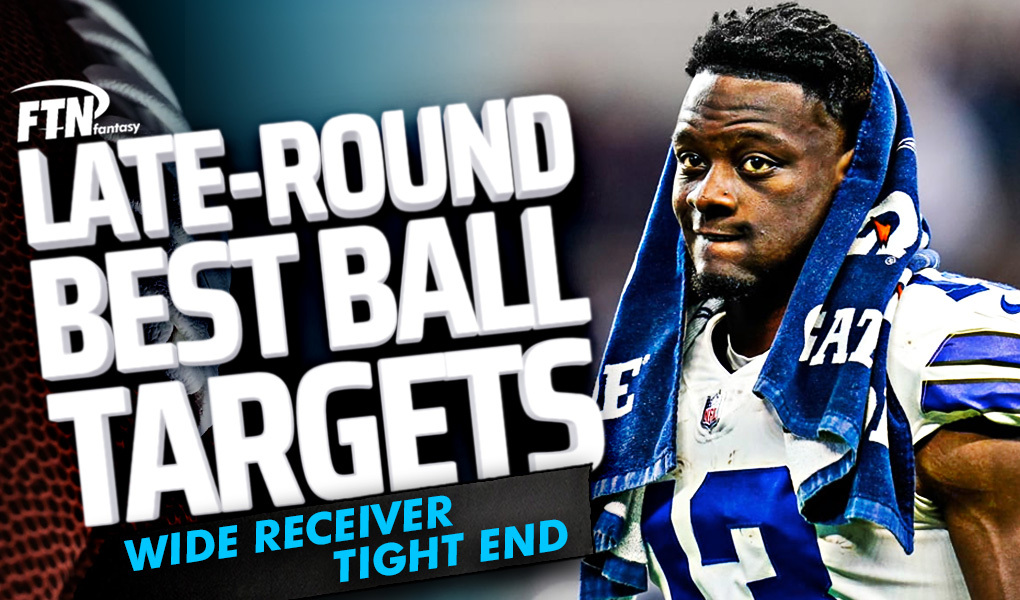 FTN's Tyler Loechner picks out some late-round fantasy options to target in best ball in 2022 at wide receiver and tight end.

It’s early April, the 2022 NFL Draft is still weeks away, but Best Ball season is still in full swing.

If you like to draft early — and plenty of people do — odds are you like doing it so you can be early to the best values. (Be sure to check out Josh Larky’s 8 favorite best ball picks right now, too.)

This article will dive into the best late-round best ball WR and TE targets for these early drafts. Check out our article for best QB/RB targets too.

Players need an Underdog ADP of 100 or later to be considered for this article.

I discussed this on the FTN Data Cast with Adam Pfeifer this week. We both love JuJu Smith-Schuster as a late-round pick now that he’s landed with the Kansas City Chiefs.

There aren’t a ton of recent stats that are encouraging about Smith-Schuster — not since he became -Ben Roethlisberger-aging collateral damage and turned into a low-aDOT tight end — but there are other factors to like.

He has an above-average nose for the end zone (9 TDs in 2020) and should see plenty of downfield targets with Travis Kelce securely in the TE role that Smith-Schuster was forced to endure in Pittsburgh in recent years.

Michael Gallup is my favorite sleeper WR candidate for 2022, and I really can’t wrap my head around him coming off draft boards as the WR57. Don’t forget that he posted a 1,107-yard season in his second year before Amari Cooper (now gone) and CeeDee Lamb became the focal points of the passing offense.

Gallup is back in the driver’s seat for WR2 duties in Dallas, and there is simply no way he doesn’t return value on his WR57 cost. (He’s top-45 in our rankings.)

I mean, he was the WR49 in points per game last season — as the deep third fiddle in Dallas. He sometimes even played fourth fiddle behind Cedrick Wilson, who is also gone.

This is such a no-brainer at cost.

Russell Gage was the WR45 in fantasy PPG last year with the Falcons. He landed in Tampa with Tom Brady in free agency, and now he’s coming off draft boards as the WR67.

He should be closer to WR50.

The big concern for Gage in Tampa will be volume. With Mike Evans, Chris Godwin, Leonard Fournette and maybe Rob Gronkowski, how much volume will there be for a non-star like Gage?

In best ball formats, the answer is: “More than enough.” Brady supported all of those players and Antonio Brown with no real loss in efficacy. There’s also the very real chance Godwin isn’t ready (or isn’t a full-go) for a significant portion of the season, considering he tore his ACL in Week 15.

He’s not exhilarating, but Zach Ertz is a good deal at this cost. He averaged 8.3 targets per game over the final 8 games of the season, including looks of 11, 13, 9, and 10 over the final month of the year.

The TDs and yardage were lacking relative to that volume, but Ertz did notch one multi-TD game last year with 8-88 through the air to boot, so a ceiling does exist. At this price, you aren’t finding a better option.

Irv Smith is a gamble, but he’s going lower in drafts this year than he was at this point last year — and nothing really has changed about his situation. In fact, you could argue it has gotten better with Adam Thielen over the hill.

Draft-pending, it appears Smith will have no competition at TE in Minnesota this season. Tyler Conklin was able to produce at the level that Irv Smith currently costs (TE19 in points per game), so I’d consider this Smith’s floor.

Rob Gronkowski really doesn’t need analysis. He’s only this low because he might retire.

I’m simply here to point out that at this price (15th round), you could be getting a top-five fantasy TE if he does decide to come back (and he’s been working out at the Bucs facility all offseason so far).

Risk exists, of course, but the payoff in this case is big relative to cost.