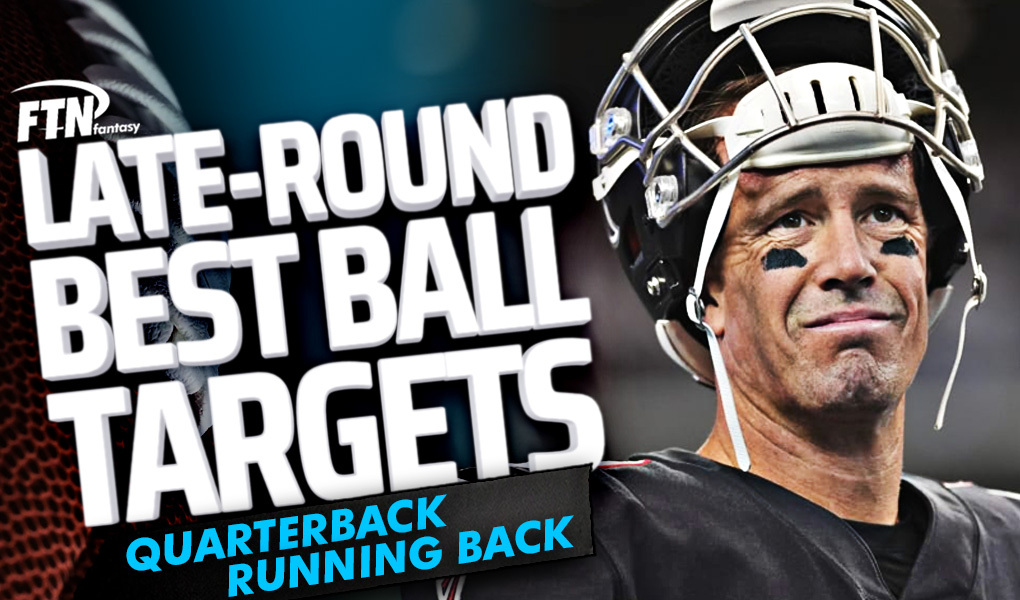 FTN's Tyler Loechner picks out some late-round fantasy options to target in best ball in 2022 at quarterback and running back.

It’s early April, the 2022 NFL Draft is still weeks away, but best ball season is still in full swing around fantasy.

If you like to draft early — and plenty of people do — odds are you like doing it so you can be early to the best values. (Be sure to check out Josh Larky’s 8 favorite best ball picks right now, too.)

This article will dive into the best late-round best ball QB and RB targets for these early drafts. (WR and TE coming Wednesday.) Players need an Underdog ADP of 100 or later to be considered for this article.

(Check out the late-round best ball targets at WR and TE.)

There’s a case to be made that Rhamondre Stevenson was a better rusher than Damien Harris last season. According to our offense vs. defenders in the box tool, here was the breakdown of Stevenson versus Harris:

From Week 9 on, Stevenson had 108 attempts to Harris’ 84 (Harris missed one game more than Stevenson in this stretch). The point is: Stevenson was a bigger part of the offense than people realize, and Stevenson is going nearly 30 picks after Harris in early best ball drafts.

The Falcons do seem rudderless with Matt Ryan gone, Calvin Ridley suspended, and the team in apparent give-up mode. But Patterson will no doubt be fed again in 2022, and I’m buying the late-career breakout as legit.

Yes, Miami has a crowded backfield with Chase Edmonds, Raheem Mostert and Myles Gaskin. The team also added Tyreek Hill, who will gobble up a ton of short-yardage receptions that may have otherwise gone to Edmonds, but the RB40 range is still too low for free agent acquisition. The RB30 range is more realistic.

Edmonds gained 28% of his yards on explosive runs last year (15-plus yards), 11th out of 49 qualified RBs (min. 100 attempts). Mostert — known for his explosiveness — had a 32% rate in 2020. That’s not a discernible enough difference to keep Edmonds off the field in favor of Mostert for “big play” potential.

Mostert has also only caught 36 passes in his seven-year career. Edmonds has 96 in just the last two years. Edmonds will be on the field more often — and for much more valuable plays from a fantasy perspective — and should be going several rounds before Mostert. He’s only going a few picks before him as it stands.

Kirk Cousins re-signing with the Vikings is low-key great for fantasy — not only for Cousins, but also for Justin Jefferson in particular. But let’s focus on Cousins here.

He’s going as the QB15 in early drafts, which isn’t too far off where he finished overall last year (QB11), but that doesn’t really do Cousins’ solid 2021 season justice.

Cousins finished as a fantasy QB1 in 56% of games last year, including a 66% hit rate over the second half of the season (six of his final nine games). You’re not confusing him with Josh Allen, but you are also not going to get a more consistent QB this late in the draft.

Derek Carr gets a big bump with the addition of Davante Adams. In truth, QB17 is probably not too far off from where he’ll actually finish (QB is loaded again this year, and FTN currently has him ranked as the QB15). But the consistency should absolutely be there in 2022, which makes Carr more interesting than ever before.

In best ball, Carr (along with Cousins) becomes the cheapest QB you can buy to pair with a truly elite WR to form a stack. Carr had the fifth-most pass attempts in the NFL last season, but he had a putrid 3.7% TD rate (seventh worst among qualified QBs, in line with Ben Roethlisberger and Daniel Jones). Adams’ arrival should help fix that in a big way.

If you think Matt Ryan is toast, then you can just sit this one out. But if you think it’s premature to put him six feet under, you have to take a shot at his current basically free price as the QB23 off boards.

The landing spot in Indianapolis is a mixed bag, too. The team has Michael Pittman and then nothing else to speak of at WR (Julio Jones is still a free agent, though…). But the defense is legit, and Jonathan Taylor will keep opposing defenses honest.

The moral of the story here is that Ryan is a gamble, but not as much of a gamble as the other QBs coming off draft boards in the same range. There’s more hope to his story.