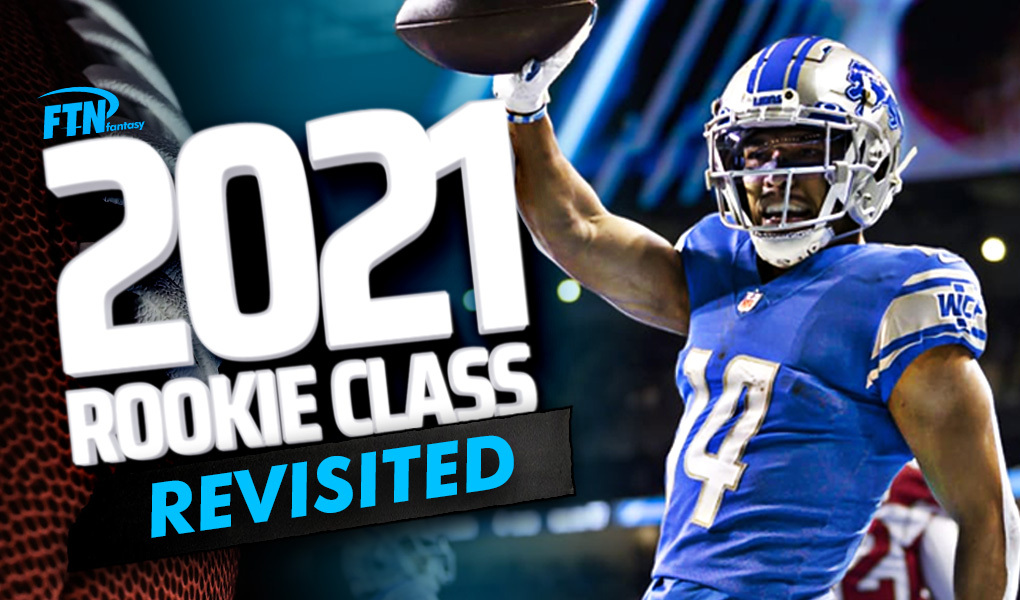 FTN's Tyler Loechner looks back on last year's rookies to find the surprises, the busts and the situations where the jury is still out.

All eyes are on the 2022 rookie class right now (related: check out Jeff Ratcliffe’s rookie rankings here) — but we wanted to take a second to revisit last year’s rookie class.

How did we view them back then? What has changed in the last year?

How we ranked the 2021 rookies for fantasy

The first eight players from last year all hit (with the obvious exception of Etienne, who missed the season with an injury). Harris became a fantasy RB1 instantly, and Chase is already a top-five fantasy receiver. Pitts scored only one TD, but he topped 1,000 yards and looked every part a star.

Williams split the backfield with Melvin Gordon as a rookie, but he looked great doing so. With Gordon (hopefully) out of the way in 2022, the sky’s the limit for Williams. And the WR trio of Smith, Waddle and Moore all produced solid (but not Justin Jefferson- or Chase-level) rookie seasons for fantasy. The arrow is definitely pointing up.

All of these players are expected to continue to be every-week fantasy starters in 2022 and beyond.

Five QBs were selected in the first 15 picks last year.

None of them was good for fantasy as a rookie.

Trevor Lawrence threw 12 TDs and 17 INTs. Zach Wilson had a 9:11 TD:INT ratio. Justin Fields was a roller coaster of epic proportions, and Trey Lance hardly saw the field. Mac Jones was by far the best of the bunch, earning a Pro Bowl nod as a rookie, but he was still hardly relevant in fantasy, throwing for only 3,800 yards, 22 TDs and 13 INTs — stats that might have looked good 20 years ago.

Fields and Lance are once again being drafted as potential fantasy QB1s. And they should be. They flashed enough upside when on the field last year, and they can rush, which is the true key.

Meanwhile, the jury is still out on Lawrence and Wilson. A bad sophomore season and we may see the “bust” label come out.

Jones is expected to be the same kind of player again in 2022. Even with improvements, he’d still be just a person to consider for weekly streaming.

Amon-Ra St. Brown led the diamonds in the rough

No surprise was bigger than Amon-Ra St. Brown, who was ranked No. 17 among rookie last year for fantasy but clearly exceeded expectations. He finished his rookie year with 90-912-5 through the air, with the vast majority (and all of the TDs) coming in the final six weeks of the season, with St. Brown transformed into a fantasy WR1.

Other potential breakout stars were Elijah Mitchell (who trounced Trey Sermon in San Francisco and is now “the guy”), Kadarius Toney, Rhamondre Stevenson and Pat Freiermuth.

It’s too early to call any of last year’s rookies busts already, but these at least semi-hyped players did not get off to a good start: