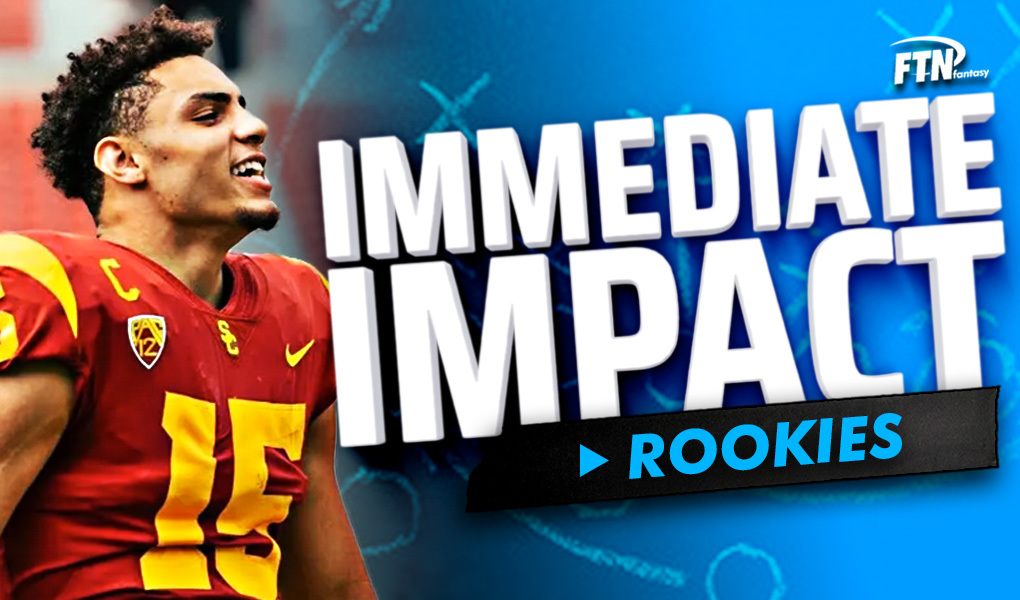 FTN's Sam Choudhury highlights some members of this year's rookie class who are most set up to contribute right away in fantasy football.

Going from college to the NFL is the biggest step you can make in football. That’s why players often take time to be productive when going from one to the other. But the special few are stars right away.

Last year, two rookies — Najee Harris and Ja'Marr Chase — finished top five at their respective positions in fantasy scoring. Of course, finding rookies who can contribute right away is easier said than done. Landing spots and draft capital will play a significant role in predicting the incoming rookie class's short- and long-term outlook.

Specific profiles, however, grade out better than others. They can help determine which players to look for before the NFL draft. Below, we're looking at a few rookies who should see the field early and have the opportunity to produce for fantasy immediately.

Breece Hall dominated at Iowa State after taking over the backfield as a true freshman. He posted a 95th percentile college dominator, averaging 5.8 yards per carry and a 10.7% target share. Hall accounted for 4,675 yards from scrimmage on 800 touches and 56 touchdowns in three seasons, eclipsing 20 touchdowns in each of his last two seasons. Hall looks to build upon his success at the next level, coming in as the most popular choice to be the first running back off the board in NFL mock drafts. He is currently being selected as the first player off the board in rookie drafts, and for good reason. He is the most complete running back in the class, checking all the boxes as both a rusher and a receiver. He is projected to go on Day Two of the NFL draft, with a chance to sneak into the back end of the first round. Unless Hall lands in a backfield that already has a star back, he’s almost certain to inherit a workhorse role and provide immediate production for fantasy managers.

Kenneth Walker burst onto the scene last season after transferring from Wake Forest to Michigan State. His first carry as a Spartan was a sign of things to come, breaking through for a 75-yard touchdown. He finished the season with 1,636 rushing yards on 263 carries and 18 touchdowns. He led FBS with over 1,100 yards after contact and was near the top in carries of 10-plus (46) and 15-plus (30) yards. Walker went on to win the Doak Walker Award for top college RB and the Walter Camp Player of the Year Award. He also finished top six in Heisman voting after leading the Spartans to an 11-2 record. Walker is arguably the best pure rusher in the class but struggled in passing situations. He earned an abysmal 41.3 pass blocking grade per PFF, a bottom-40 number in college football. He was also limited as a receiver, catching just 13 passes for 89 yards last season. Despite his lack of receiving production, there's no telling if that sort of usage will translate into the NFL. Walker is projected to be the second running selected in the second round of the NFL draft and is going as the RB2 in rookie drafts. He has shown the ability to handle a large workload and should be featured early and often at the next level.

Garrett Wilson was nothing short of spectacular in his three seasons at Ohio State, stepping onto the field immediately as a true freshman. In his first collegiate season, Wilson accounted for 11.4% of his team’s receiving yards and 10.4% of the receiving touchdowns. He finished fourth in catches, receiving yards and receiving touchdowns behind only seniors KJ Hill and Binjimen Victor and sophomore Chris Olave. Wilson broke out the following year in a pandemic-shortened 2020 season. He accounted for 34% of the Buckeyes' receiving yards with a 30% dominator rating. In his final college season, Wilson took another step forward, setting career highs in receptions (70), yards (1,058) and touchdowns (12). Wilson has the best production profile in the class and is the odds-on favorite for the first wide receiver to be drafted (currently -110 on DraftKings Sportsbook). The early draft capital ensures that Wilson will have every opportunity to see the field right away and provide immediate fantasy production.

Chris Olave will join college teammate Wilson as a Day One selection in the 2022 NFL Draft. He put together a productive four-year career at Ohio State despite facing elite-level target competition. As a freshman, Olave saw minimal playing time buried in the depth chart behind Terry McLaurin, Parris Campbell and KJ Hill. He made the most of his opportunities before breaking onto the scene in "The Game" against Michigan. He caught two touchdowns and blocked a punt, leading the Buckeyes to victory. He followed up his performance with another big game in the Big 10 championship, catching five passes for 71 yards and a touchdown. Olave solidified himself as an alpha wide receiver as a sophomore, leading his team in yards (840) and touchdowns (12). He accounted for 23.2% of the team's target share and 18.1% of receptions. He was even better in the 2020 COVID-19 year, averaging 7.1 catches, 104.1 yards and a touchdown per game, with a 34.7% target share. He wasn’t as dominant as a senior, with Wilson and sophomore standout Jaxon Smith-Njibga both bettering him in receptions and yards — though Olave led the team with 13 receiving touchdowns. Still, Olave's collegiate profile is strong enough to warrant mid-first-round draft capital with the opportunity to see the field early.

Drake London committed to USC as a dual-sport athlete in football and basketball. He made his presence felt early, logging 39 receptions for 567 yards and five touchdowns in 8 games as a true freshman. He had 18.7% of his team's receiving yards and was the fourth receiving option behind Michael Pittman, Amon-Ra St. Brown and Tyler Vaughns. Following Pittman's departure to the NFL, London took over as the alpha wide receiver in 2020, eclipsing 500 receiving yards in just six games. He built upon his success in his final collegiate season, ranking 19th in targets (119), 14th in receptions (88), and 27th in receiving yards (1,084) among all FBS wide receivers. London's numbers are even more impressive, considering he appeared in only eight games due to an ankle injury. Nonetheless, London accounted for 42.98% of the Trojans' receiving yards per game. He showcased the ability to win in a multitude of ways, spending the first two seasons in the slot before transitioning out wide in 2021. He was a mismatch on the field: Per PFF, he ranked 12th in yards per route run (3.42) against man coverage and second in yards per route run (4.02) against zone coverage among receivers who saw at least 15 targets. His do-it-all skillset and ability to win all over the field as him in contention to be the first receiver selected on draft day. London will likely step in as his team’s WR1, regardless of the landing spot, and is someone you should feel comfortable slotting into your starting lineup from Day One.