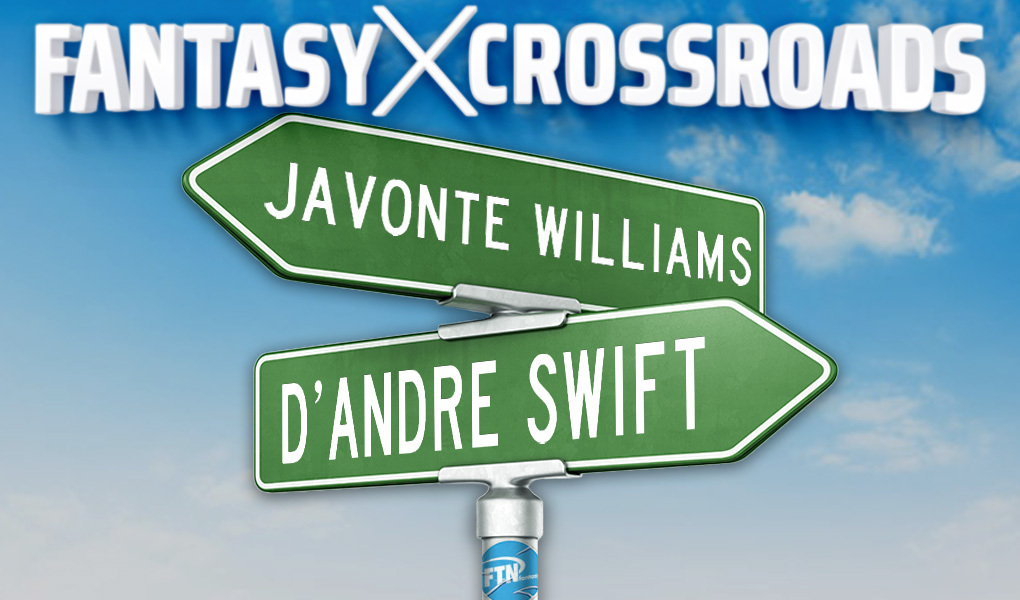 FTN's Adam Pfeifer pits two young running backs with huge upside against one another to see who should be the pick in fantasy football in 2022.

Our Fantasy Crossroads series continues with a look at two of the top young running backs in all of football.

The best is theoretically yet to come for both D'Andre Swift and Javonte Williams, but if you had to choose between the two running backs for your fantasy roster, who gets the edge?

(Follow along with the entire Fantasy Crossroads series here.)

The Case for Swift

D'Andre Swift isn’t likely to contend with Derrick Henry or Jonathan Taylor for the league-lead in rushing attempts anytime soon. But guess what? He doesn’t have to.

To start his NFL career, Swift’s workload has been in the Alvin Kamara/Aaron Jones mold, which is incredibly valuable in fantasy football. Sure, he’s only seen 20-plus carries in just one game through his first two seasons. However, Swift sees receptions and goal-line carries, which are the two most valuable touches a running back can receive. Despite missing nearly five games last season, Swift still finished fourth among all running backs in both targets (78) and receptions (62), while his 13.8% target share was the second-highest rate at the position. He recorded at least three receptions in all but one game last season, while seeing at least five targets in 10 of 13 contests. Before suffering a shoulder injury on Thanksgiving, Swift was the RB5 in all of fantasy in PPR leagues, averaging 18.6 points per game. During that same span, Swift also led all running backs in receptions (53) and targets (65), while only Cordarrelle Patterson had more receiving yards than Swift’s 420. And keep in mind that while Swift did return to end the year in Weeks 17 and 18, he was seriously limited. During that stretch, he only recorded 17 total touches, while logging 57% and 54% of the snaps, which was well below his 73% snap rate from the first 10 weeks of the season.

Although the Lions have added Jameson Williams and D.J. Chark during the offseason, Swift will remain a focal point of this offense, especially with Jared Golf at the helm. We know Goff has had a tendency to check the ball down, and he showcased it last season. During his inaugural campaign in Detroit, Goff posted the lowest intended air yards per pass attempt among all qualified signal callers (6.4), while his 4.5 air yards per completion was also the lowest mark in the league. Nearly 16% of his pass attempts were behind the line of scrimmage last season, while 50.8% of his passes were of the short variety (0-9 yards), the eighth-highest rate in football. And with Chark and Williams providing the Lions with field-stretching ability that they were missing last season, the underneath will be open for Swift to operate and make plays. He truly has as much upside as any running back in the NFL when it comes to work in the passing game. And while his goal-line carries (4) don’t jump off the page, he was still the goal-line back over Jamaal Williams last year. The Lions offense should be much improved in 2022, while they should be able to improve on their 2.6 red-zone scoring attempts per game from a season ago (fourth fewest).

Meanwhile, Detroit has built one of the best offensive lines in all of football. The Lions, as a unit, were 15th in yards before contact per attempt (1.69), while Swift alone averaged 2.5 yards before contact per rush, tied for the 12th-highest mark among qualified running backs. And when Swift gets to the second level, look out. His 30.8% explosive run rate, which measures the percentage of runs that go for 15 yards or more, was the ninth-highest mark among all running backs with at least 70 carries this past season. And keep in mind that the Lions played most of the season without Frank Ragnow, who is one of the top centers in football. Back in 2020 when he played 14 games, Ragnow received PFF’s third-best run-blocking grade among all centers.

The Case against Swift

There is clearly more to like about Swift’s fantasy potential than dislike. And while he does see a ton of high-value touches, it would certainly be nice if he saw 90% of the work. However, that doesn’t seem likely to happen, as Jamaal Williams still averaged just over 11 touches per game alongside Swift during the first 10 games of the season. We did see Swift slowly start to take over that backfield, especially in the snaps department, but Williams will continue to play a role, while Craig Reynolds may have earned some playing time down the stretch of last season. Secondly, the offense is likely to improve, but by how much? A huge reason why a running back like Aaron Jones has been so good in fantasy despite seeing decent, but not elite, volume is the fact that he played in elite offenses, giving him massive touchdown upside. Detroit’s upside is to finish the season is perhaps the 15th-best offense in the NFL.

The Case for Williams

During his rookie season, Williams essentially split carries right down the middle with veteran Melvin Gordon. And like he did throughout his collegiate career, Williams continued to break a ton of tackles at the NFL level. In fact, Williams forced 53 missed tackles this past season, fifth most in football. That number is even more impressive when you consider that the four running backs with more missed tackles forced finished the season with 25, 14, 129 and 104 more rushing attempts than Williams. Williams broke a tackle every 6.5 rush attempts, the best rate in all of football. He is an absolute stud — all that held him back last year was volume. Williams and Gordon split work and Williams ultimately averaged just under 12 carries per game. But in the one game Gordon missed last year, Denver used Williams as an every-down back, as he recorded 23 carries and six receptions in a game against the Chiefs, recording 178 total yards and a touchdown. Despite splitting carries in a bad offense, Williams still averaged just over 12 fantasy points per game during his rookie season. Heading into his sophomore season, it is pretty safe to assume that the Broncos offense will take a giant step forward.

Russell Wilson is now the starting quarterback in Denver, which should help unlock this entire offense. In 2021, just over 37% of the Broncos offensive drives ended in points, the 10th-lowest rate in the NFL. With Wilson under center, Denver should see more sustained drives, which will lead to more scoring opportunities for Williams. And while the addition of Wilson and a new regime should lead to more passing, I still view the Broncos as a run-first team, with Williams operating as the 1A in this backfield.

The Case against Williams

There is really one argument against Williams, and it is Gordon’s return, as he recently re-signed. I’d expect Williams to earn a bit more work in year two but even then, this might go from a 50/50 split to 60/40 in favor of Williams. And with how Williams often invites contact as a runner, it is possible that Denver wants to continue to use multiple running backs, especially with Nathaniel Hackett as the head coach, who has used multiple running backs in previous offenses. During the time Gordon was a free agent, Williams was viewed as a borderline top-five fantasy running back. But with Gordon back in Denver, Williams is now closer to the RB12-15 range, at least for me.

For most of the offseason, Williams was clearly ahead of Swift. He was the top back on a potential top-10 offense, possessing a clear path to 20-plus carries, goal-line and passing-down work. However, the return of Gordon gives Swift a slight edge now, especially in PPR leagues. Both running backs have top-five potential, but it will be more difficult for Williams to reach that ceiling with Gordon back in town. Swift has quickly become perhaps my favorite player to target in the second round of fantasy drafts, while Williams has moved down in my rankings lately.