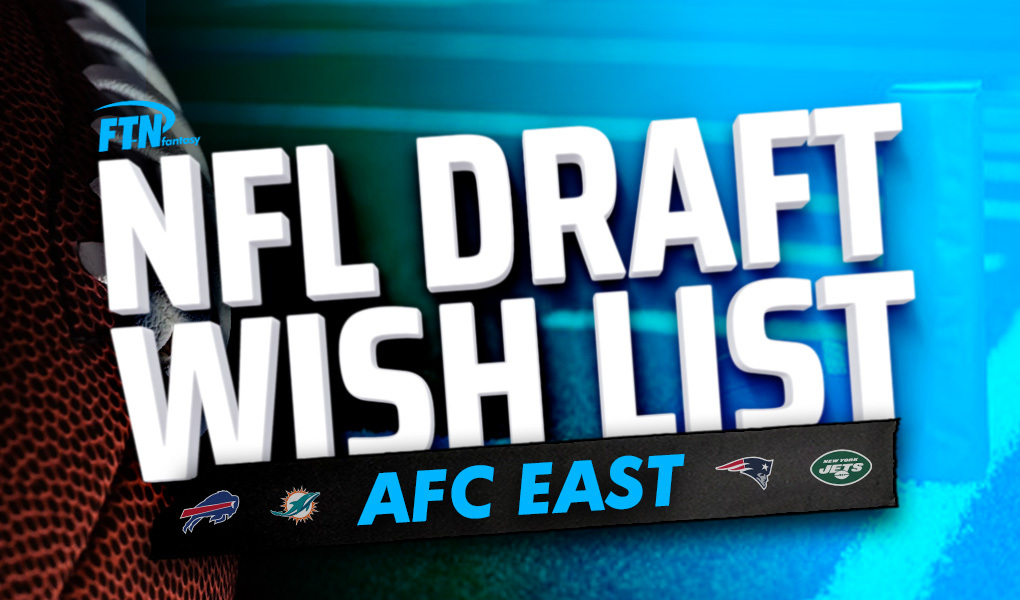 FTN's Adam Pfeifer identifies the key needs and strategies for the four AFC East teams ahead of next week's 2022 NFL Draft.

With the NFL Draft right around the corner, FTN is taking a moment to look at each division one at a time. We’re going team-by-team to identify the biggest needs and moves the franchises should be looking at before or during the draft, which starts April 28.

The Buffalo Bills have won this division in back-to-back seasons, unseated longtime AFC East powerhouse New England. The Bills were knocked out of the playoffs in the Divisional Round in an all-time classic against the Chiefs, a week after the Bills rolled the Patriots in the Wild Card Round. The Dolphins had seven-game winning and losing streaks last year, ultimately finishing 9-8 and just outside the playoffs. And the Jets kept being the Jets.

Below we'll take a quick look at each team, their pick haul, and their key needs to address in the draft.

Despite being one of the best teams in all of football, Buffalo could go a few different directions in this draft. Defensive line made a ton of sense, but they clearly addressed that position during the offseason. After losing Cole Beasley and Emmanuel Sanders, Buffalo could easily go wide receiver with one of their first two picks, while there has suddenly been a lot of buzz around Buffalo drafting RB Breece Hall. While selecting Hall in the first round seems suboptimal, drafting the Iowa State running back in general does make sense. As most people know, I am the No. 1 Devin Singletary fan in the world. He played outstanding down the stretch last season, and I truly believe this team can still thrive with Singletary as the lead running back. However, he is set to hit free agency after this season and Buffalo would have the opportunity to add a more talented player without having to worry about paying a running back next season. Hall is NFL ready after recording 718 rushing attempts over the last three seasons, while no player in college football has touched the football more over the last two years. Hall is also a natural pass-catcher, which is something Buffalo is clearly looking for at running back after (almost) adding J.D. McKissic. Don’t be surprised if Hall or Kenneth Walker are playing in Buffalo next season.

Meanwhile, the Bills also really need to add to their secondary. Tre'Davious White is one of the best cornerbacks in the NFL but is coming off a torn ACL that could force him to miss the first few games of the season. Buffalo also lost Levi Wallace in free agency, leaving them with White (whenever he returns), Taron Johnson and Dane Jackson as the top three corners. I’d be surprised if it happened but if Clemson cornerback Andrew Booth makes it to 25th overall, Buffalo should not hesitate. And yes, this is the Bills fan in me talking but if Booth is still on the board, Buffalo should address the secondary and then look towards running back or wide receiver in the later rounds. Speaking of wideout, it is very possible Brandon Beane looks to add to that position. Gabriel Davis has been amazing and will take on a larger role in Year Three, but the Bills still should look to add more talent. Treylon Burks is a player who could go anywhere from 15th overall to 50th. But the fit with Buffalo makes sense. Burks is elite after the catch, which is something Buffalo’s offense actually lacks. In 2021, the Bills ranked dead last in yards after the catch per reception (4.2). Burks, meanwhile, averaged 9.3 yards after the catch per reception last year, the sixth-best mark in college football. And while some teams are worried about how NFL-ready he is, Burks would fit right in with Buffalo because he’d be their fourth or fifth target at times.

Clearly, Miami doesn’t have a lot to work with in this draft. They made the trade for Tyreek Hill, which takes away wide receiver as a position of need, as Hill and Jaylen Waddle create one of the most exciting wide receiver duos in the league. Offensive line, despite some improvements this offseason, still feels like the move for the Dolphins here. With their first pick in the third round, I like the idea of Miami targeting Kentucky center Luke Fortner, who has experience starting at center, left guard and right guard, which is exactly what this team needs.

The Patriots were definitely looking to upgrade the wide receiver position this offseason, and while they weren’t able to add Calvin Ridley, Amari Cooper or Allen Robinson, the team did trade for DeVante Parker. That certainly doesn’t take wide receiver off the table for them, but I believe they address defense in the first round. And as much as it pains me to say it, Andrew Booth seems like the logical choice for this team. J.C. Jackson left during free agency, while they traded Stephon Gilmore last season, leaving the Patriots with Malcolm Butler, Jalen Mills and Jonathan Jones at cornerback. Linebacker is also a position the Patriots could look at and Devin Lloyd would be a seamless fit. Lloyd can honestly do a little bit of everything, especially covering tight ends. I also still think it is possible that New England adds more talent at wide receiver, but later on in the draft.

It is no secret that the Jets have been looking to add more help at wide receiver. They were one of two teams in on Tyreek Hill and have been linked to multiple free agent wide receivers. Keep in mind that with how many draft picks they have, a draft night trade for Deebo Samuel is firmly in play. But assuming they sit tight, the Jets very possibly select a wideout with one of their first two picks in the first round. Drake London makes so much sense for this team. He and Elijah Moore would complement each other so, so well and London would give Zach Wilson a huge target down the field. We know Wilson likes to take chances and throw the ball deep, but the Jets really didn’t have that personnel last year, especially when Corey Davis was out of the lineup. London stands at 6-foot-5, 210 pounds and despite missing eight games last season, he still tied for the most contested catches in college football with 17. And London also possesses strong after-the-catch ability for his size. I think he’d be a perfect fit alongside Wilson and Moore in New York.

Outside of receiver, the Jets will likely go edge or cornerback. Sauce Gardner is viewed as the top corner in this class and would instantly improve a Jets secondary that has struggled over the last few seasons. And if they don’t address corner in the first round, consider them a strong candidate to draft an edge rusher. Travon Walker is extremely athletic and while the overall sack production wasn’t quite there, Walker has so much upside.