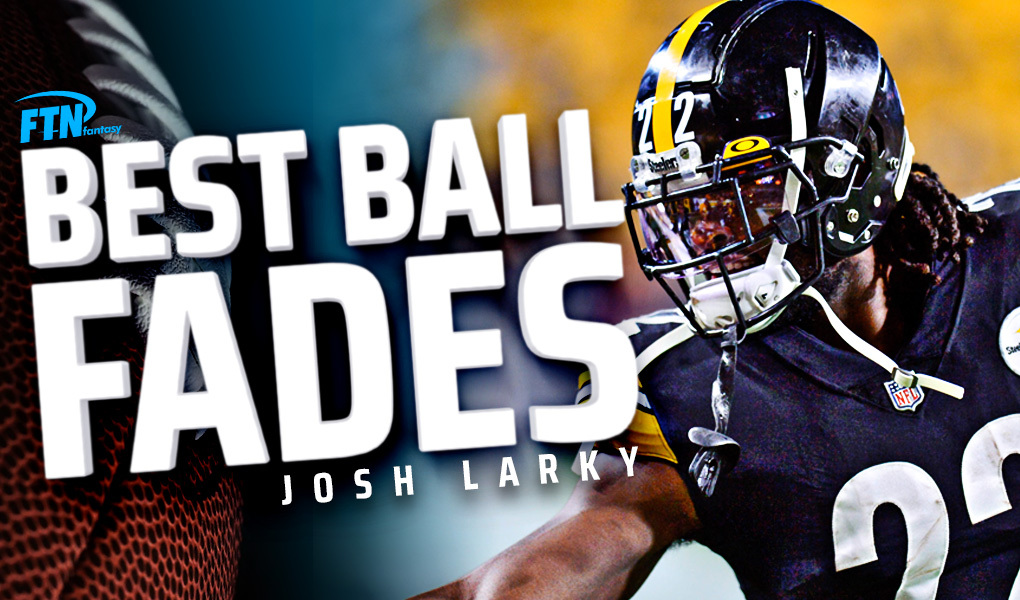 FTN's Josh Larky picks out some of his key players to fade in best ball in 2022 fantasy football drafts.

In fantasy football, the best teams are usually carried by 2-3 players vastly outperforming their average draft position. The same is true in best ball. I doubt those who drafted Cooper Kupp in the fourth round last year were far “better” drafters than average, yet teams with Cooper Kupp advanced at three times the average rate in best ball tournaments.

If you drafted two of Cooper Kupp, Deebo Samuel, Leonard Fournette, James Conner, Mike Williams and Mark Andrews, there was a strong chance you won your 2021 league. None was going in the first few rounds of drafts, yet all performed like Round 1 draft picks.

Early in drafts, we should be taking shots on players that can help us win our league. Neither player highlighted in this article has a strong chance to fit this mold, and I outline my reasoning for each player in-depth.

If you want a comprehensive list of players I’m targeting/fading, you can check out my best ball rankings here. This article is a peak beneath the curtain, so you can understand my process and how much research goes behind my player takes.

For the sake of consistency, all ADPs referenced are from Underdog Fantasy, and fantasy points will be discussed using half-PPR scoring — the system Underdog uses.

No RB in the NFL worked harder than Najee Harris last season. His 381 total touches led the NFL and were at least 48 more touches than every RB not named Jonathan Taylor. His 94 targets tied with Austin Ekeler for most at the position.

Steelers RBs had 468 combined opportunities (carries and targets), and Harris accounted for 401 of those. That 85.7% opportunity share was highest in the NFL.

So, why would I fade the last great NFL workhorse, a true throwback player whose usage resembles the RBs of the early 2000s much more closely than his 2021 counterparts?

Harris’ herculean effort led to him finishing as the RB7 per game among RBs with at least 12 games played.

When drafting Harris as the fifth RB off the board, you want the overall RB1 to be in his range of outcomes. RBs get injured more frequently than WRs and miss more games per season on average than WRs. When drafting a running back in the first round, he needs actual league-winning upside, or you’re better off taking a receiver instead.

Harris’ issue is that he really doesn’t do anything particularly well from an efficiency standpoint, which makes it difficult to improve upon his 2021 numbers.

He was No. 2 in the NFL with 18 carries per game, and I don’t believe there’s much room for improvement. His 307 total carries were second in the NFL behind Jonathan Taylor, and no other RB reached that 300-carry milestone last season.

His RB-leading 94 targets masked his target share of 14.4% — very good, but certainly not elite. The Steelers will likely throw the ball fewer times in 2021 as they switch over to Mitchell Trubisky, who is more mobile than Ben Roethlisberger.

Najee Harris only scored 10 TDs last season, and I do believe this is the easiest area for him to show improvement in 2022. His 37 total red-zone touches were 23rd among RBs, one fewer than Myles Gaskin and three more than Alexander Mattison.

The Steelers’ offense was really bad by every metric last season, and Harris definitely suffered as a result. The looming problem is the 2022 Steelers offense, which doesn’t project to be much better than the 2021 version. Trubisky is most likely going to be one of the five worst starting QBs in the NFL next season. The offensive line should be improved, but still unspectacular. I struggle to see the Steelers sustaining drive after drive, giving Harris more of those valuable red-zone touches in 2022.

The last knock on Harris is that he doesn’t generate explosive plays. Among the 18 RBs with 200 or more carries, the rookie ranked 15th with 9.7% of his runs going for 10 or more yards.

Harris was a touch monster in 2021, but it’s a tall task for him to once again lead all RBs in total touches without getting injured … while also improving his efficiency … while Trubisky also becomes a good NFL QB. There are too many factors piling against Najee Harris. It’s tough to see him being a huge disappointment if he stays healthy due to his outrageous volume, but his chances of being a 2022 league-winner are throttled compared to all the other RBs going early in fantasy drafts.

In 12-person drafts, if you had no preference for any players, you would be drafting each player 1 in 12 times on average. With Najee Harris, I suggest taking him 1 in 30 drafts, on average.

There are two primary concerns with Deebo Samuel in 2022: 1) His quarterback, and 2) His unsustainable 2021 efficiency.

Trey Lance will be the 49ers’ QB in 2022. Lance had a 50% or higher snap share in three games last season. In those three games, Lance totaled 70 pass attempts and 31 rush attempts. Because one of those games involved him taking over for an injured Jimmy Garoppolo at halftime, we can’t simply divide those numbers by three to know how many pass attempts and rush attempts per game to expect from Lance in 2022. Also, it’s a really small sample size. However, we know Lance was a prolific rusher in college. And we know that in a 2.5-game sample in 2021, his pass:QB run ratio was nearly 2:1. Garoppolo on the other hand attempted 441 passes and ran the ball only 38 times, slightly above a 10:1 pass:QB rush ratio.

If he’s running 8 times per game, compared to Garoppolo’s average of roughly 2 per game last year, this pulls 6 pass attempts out of the offense.

(The case can be made that Lance will be better than Garoppolo and the offense overall will take a step forward in 2022, but the case can also be made that Lance is a below-average NFL QB, as he played only one full season at North Dakota State, then sat on the bench for the majority of his 2021 rookie season. But I will keep it simple, and on your own you can modify this thought experiment however you so choose.)

Meanwhile, for Samuel, 2021 was a tale of two seasons.

Samuel led the 49ers in targets in each of the first eight games of the season, averaging 10 per game. His target share through this stretch was 31.9%, a touch ahead of Cooper Kupp’s full season target share of 31.7%.

George Kittle missed three games during this span due to injury, and Brandon Aiyuk was in the Kyle Shanahan doghouse during the majority of this time — Aiyuk was below a 90% snap share in each of the first seven games, with an average of just 69% of the snaps. From Game 8 onward, Aiyuk was at a 90% or higher snap share in every single game.

After those initial eight games, Deebo didn’t lead the team in targets again until Week 16. While his first-half-of-the-season target share was 31.9%, it plummeted to 18.5% in the second half. Meanwhile, Aiyuk’s target share was 22.0% during this time, and Kittle’s was 23.6%. Essentially, Deebo was the WR3 on his own team the second half of last year.

With Deebo Samuel, the efficiency went beyond just rushing TDs. He was the beneficiary of a busted play where he was left wide open and had a nice 80-yard stroll into the end zone. While a component of big plays is that player’s big-play ability, there is also a hefty dose of luck involved. Deebo caught over 63% of his targets while averaging over 18 yards per reception. From 2000 to 2020, zero players accomplished this feat. (Funny enough, Ja'Marr Chase also met these catch-rate and yards-per-reception thresholds in 2021.)

The switch to a mobile and largely unproven QB, the half a season where Deebo was his own team’s WR3, and the historic efficiency are all reasons to pass on Deebo Samuel at a WR6 cost.

As a reminder, in 12-person drafts, if you had no preference for any players, you would be drafting each player 1 in 12 times on average. With Deebo Samuel, I suggest taking him 1 in 40 drafts, on average.

Those are two of my fades for 2022. Check out my best ball rankings here to see the rest.