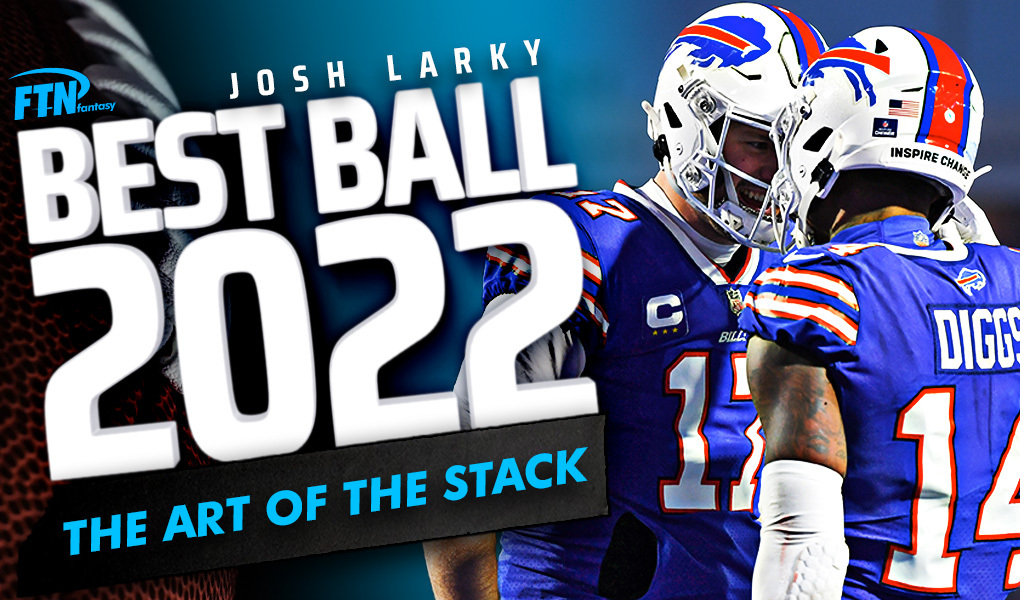 Best Ball 2022: The Art of the Stack in Fantasy Football

FTN's Josh Larky runs through the success rate of the various kinds of stacking in best ball to see what strategies can emerge.

Stacking — pairing your QB with one or more of his skill position players — is imperative in best ball drafts, both 12-person and tournaments. If you’re on the fence about stacking, or are curious to explore how stacking actually affects win rates in big money best ball tournaments, you found the right article.

Before diving into my analysis in this article, if you haven’t already, read through the “Theory Behind Stacking” and “Math Behind Stacking” sections from my Best Ball 101 Strategy Guide. It will take you two minutes, and it functions as the perfect primer on stacking.

I have your attention now, huh? I didn’t spend a dozen hours coding up some research to try to help you (and me) win $250.

Think of pick-by-pick data as knowing which player was drafted by each team for every round of every draft room in the tournament. With 18 players drafted per team, this results in 2,796,750 individual picks made (155,375 x 18) in 2021 alone.

The 2020 and 2021 Best Ball Mania tournaments were largely similar in structure, with a couple small differences due to three times the entrants in 2021 and the additional 2021 regular season game.

Teams were reassigned to random 12-person groups, and the top-scoring team from each group in Week 14 advanced to Round 3.

Again, advancing teams were reassigned to random 12-person groups, and the top-scoring team from each group in Week 15 advanced to Round 4.

Round 4 featured the final 50 teams, and the highest-scoring team in Week 16 won the tournament.

Teams were reassigned to random 18-person groups, and the top-2 scoring teams in Week 15 would advance to Round 3.

Again, teams were reassigned to random 18-person groups, and the highest-scoring team in Week 16 would advance to Round 4.

Round 4 consisted of 160 teams, and the highest-scoring team in Week 17 won the tournament.

In prior research, I looked at every possible stacking combination and analyzed advancement rates.

My head began spinning — and yours may have as well. That research was novel last year, and ultimately moved the stacking discourse forward. But for 2022, I found a new angle to attack and analyze for stacking.

From there, I made note of every time the skill position players in that week’s optimal lineup were on the same team as the optimal QB.

This is the most straightforward methodology for stacking research. If stacking is beneficial in best ball, we should expect to see that teams advancing in the tournament had more stacks entering their lineup each week compared to non-advancing teams. It’s also intuitive to think those stacks would score more fantasy points when they do enter your optimal lineup.

Zooming out, this methodology can more definitively showcase the art of stacking. Sure, it’s fun to stack a late-round WR or TE with your QB — think Carson Wentz and Zach Pascal from 2021 — but that tandem probably won’t enter your optimal lineup very often. So, we shouldn’t give that drafter equal stacking credit compared to someone drafting Cooper Kupp and Matthew Stafford much earlier in their 2021 draft. Both teams stacked their QB with a WR, but only one team was expecting to see that tandem consistently cracking their optimal lineup.

This new system rewards actual player performances by only looking at your best 8 players each week. My stacking research is essentially reverse engineering how to draft a team that includes high-scoring weekly performers.

The table below demonstrates that teams advancing out of Round 1 in 2020/2021 were getting more fantasy points (and fantasy points more often) from stacking than their non-advancing opponents.

We can interpret the table by recognizing that, among 2021 advancing teams, 37.6% of weekly optimal lineups featured a single stacked QB, and those single stacks were worth 39.4 fantasy points on average.

Note the massive sample sizes and the clear advantage in favor of stacking. Those who advanced to Round 2 in 2020/2021 had weekly optimal lineups that included stacks more often, and they received more points from their stacks than their non-advancing opponents.

To get your team out of Round 1 and into the playoffs, target stacks early on in your draft. While correlating your later-round best ball picks is a solid strategy, forgoing stacking early on decreases your chances of attaining high-scoring stacks, as players drafted earlier score more fantasy points. In this way, we can reverse engineer the true power of stacking.

The sample sizes decrease significantly once we are in Round 2, trying to advance to Round 3. Like the prior table, we can see the clear benefits of stacking in action. Round 2, unlike Round 1, is only one week long, so advancing out of Round 2 is essentially a DFS game.

The importance of stacking in DFS has been widely studied and accepted as the dominant strategy for tournaments. Here, we see that principle in action, as advancing teams in both 2020/2021 more often had stacks in their optimal lineup, as well as having higher-scoring stacks.

Note that fewer advancing teams at this stage had no stacks compared to the prior table. As expected, the more these best ball tournaments morph into DFS contests, the more paramount stacking becomes.

The gap widens even further for how few teams are able to advance to Round 4 without stacking. Note the massive jump in frequency of double stacks captured in the advancing teams’ optimal lineups.

To make it to the final round, you can technically get there without stacking. However, at each stage of the tournament, you’re threading the needle compared to someone who has correlated their skill players with their quarterbacks.

Stay tuned for another article this week focused on the optimal stacks from 2021, and how to apply that information to 2022. Included will be the specific stacks I’m targeting in 2022.