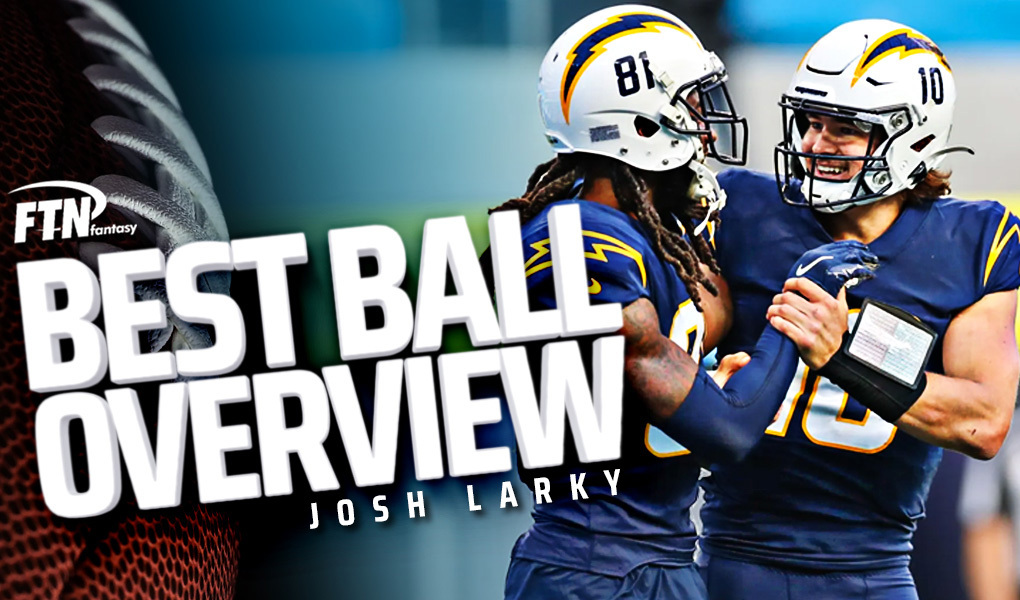 Best Ball 101: Breaking Down the Strategy and Approach

FTN's Josh Larky goes through the best ball version of fantasy football to highlight the best tips and strategies.

“I hate fantasy drafts.” — Said no one ever.

Best ball is the fastest growing format in fantasy football, because 100% of your time is spent drafting.

If you’re brand new to best ball, you’ll find the next two sections helpful. If you already have experience with best ball on Underdog Fantasy, scroll down to the “Handling Each Position” section.

What is Best Ball?

For those unfamiliar, think redraft fantasy football but remove start/sit decisions, the waiver wire and trades. You draft your team before the season starts, and then during the season, your best players are automatically started in your lineup each week. At season’s end, you tally up each team’s weekly points, and the winner is the one with the most total points.

Underdog Fantasy is the slickest/smoothest interface for best ball drafting. No platform gives you a better draft room experience, and it’s also incredibly easy to screenshot your teams post-draft or go back and view prior drafts (and assign memorable nicknames to your favorites).

All Underdog drafts are 20 rounds, and you’ll draft QB/RB/WR/TE. Scoring is half-PPR, and each week during the NFL season the “computer” will choose 8 players from your team as your optimal lineup.

For the best ball leagues where you only start 1 QB each week, I’d aim to draft two high-end starting QBs, or three starting QBs. For 2022, if you drafted Lamar Jackson (QB4 ADP) and Matthew Stafford (QB9), there’s very little marginal benefit of drafting a third QB.

Test case: Justin Herbert and Aaron Rodgers were both top-10 QBs per 2021 Underdog ADP. Having those two would have netted you 429.6 fantasy points during the 17 weeks of the fantasy season. The mediocre due of Kirk Cousins and Carson Wentz would have delivered 347.3 points. If you had added Joe Burrow to the Cousins/Wentz duo (none were top-10 ADP in 2021), your team would have scored 412.1 fantasy points from the QB slot. Strikingly similar to Herbert/Rodgers!

In the superflex best ball leagues, I’d aim for three starting QBs, with at least one a high-end fantasy option. If you cannot get a top-10 QB on your team, I’d consider up to four QBs for your team in that format.

Test case: Herbert and Rodgers would have given you 689.9 fantasy points in 2021. Adding Kirk Cousins to Herbert/Rodgers would increase the total to 788.0. Cousins and Wentz would have only mustered 538.4 points if you went with only two average starters. The trio of Jalen Hurts, Carson Wentz and Matt Ryan would have given you 637.2 fantasy points. Drafting Kirk Cousins in addition to Hurts, Wentz and Ryan would bring that total up to 726.4 points in 2021.

All 20-man best ball drafts will have you starting two RBs each week, and you’ll want to draft 4-8 RBs on your roster.

If you’re going really RB-heavy in your draft room, you can get by with as few as four on your team. A four-RB team in 2022 may look like Jonathan Taylor (RB1 by ADP), Saquon Barkley (RB13), Elijah Mitchell (RB24), and Tony Pollard (RB30).

The thought process behind this type of build is you’re able to stockpile additional WRs, and you don’t need too many things to go your way for your RB room to become elite. If Ezekiel Elliott suffers a serious injury early in the 2022 season, then this team has the best RB group in your league, even though you only took four in the draft. Conversely, any major injury to these RBs and you’ll be hard pressed to remain in contention. It’s a high-risk, high-reward strategy.

More common is taking 5-6 RBs, where you take 1-2 early on, 2-3 in the middle rounds, and 1-2 in the later rounds. This type of balanced approach gives yourself more room for injury, while also making it easier to grab studs at the other three position groups.

The other extreme end is the zero-RB strategy, where you stockpile 7-8 RBs, and take them all in the mid-late rounds. When doing this, be mindful of which RBs are likely to score fantasy points early in the season.

Taking seven backup RBs like Chicago’s Khalil Herbert will limit the fantasy points your team can score early in the season, before injuries inevitably happen. Likely committee backs (AJ Dillon and Chase Edmonds), as well as pass-catching specialists (J.D. McKissic and James White), are the archetypes of RBs to mix/match with pure handcuff backs when going zero-RB.

Generally, you should not be drafting RBs on the same team, unless their roles are clearly defined and it’s not a strict handcuff situation. Drafting both Dalvin Cook and Alexander Mattison is a less optimal play than Damien Harris and James White.

You never want to find yourself rooting for injuries on your own team. For Mattison to return value, he needs a major injury to Dalvin Cook to occur. With Harris/White, there’s potential for both to contribute without cannibalizing each other. The occasional “James White game” where he has 8 targets does come at Harris’ expense that week, but unlike Cook/Mattison, we don’t need a Harris injury for White to produce spike weeks. When in doubt, do not draft RBs from the same team onto your roster.

In the 1-QB best ball drafts, you’ll have to start three WRs each week. For these drafts, I’d recommend 8-11 WRs on your team.

When targeting WRs in the later rounds to fill out your roster — unlike with RBs — target WRs on the same team as your earlier picks. While RB is almost entirely a volume-driven position for fantasy scoring, WR is much more volatile week to week, and the main reason your teams should have more WRs than RBs on them. A long TD catch by a team’s second, third or fourth receiving option can be the reason a team’s WR1 underperforms that week. If you already have Jerry Jeudy on your team, target his teammates like Tim Patrick and KJ Hamler toward the middle to end of your draft.

In the superflex drafts, you only need to start two WRs each week, rather than three. For these drafts, I’d recommend 6-9 WRs drafted, with 7-8 WRs the more common number for a balanced build.

The elite-TE builds often produce more overall fantasy points, but the opportunity cost is much greater when using an early-round pick on TE.

For draft strategy, like WR, it’s acceptable to draft two TEs from the same team. Because you only need one TE score each week, TE teammates don’t cannibalize each other in the same way RB teammates can. For 2022, that could be drafting both Hunter Henry and Jonnu Smith or Dawson Knox and O.J. Howard. Since your TE usually will only need a TD to enter your optimal lineup, the Buffalo TEs are a great tandem to target, where you can expect a TD most weeks.

Drafting players on the same team as your QB is stacking. If you draft Justin Herbert in the fourth round of your 2022 fantasy draft, you can stack Mike Williams with him in the next round.

Stacking is critical in best ball — where the computer is choosing your optimal lineup each week — because it minimizes how much we need to get “right.” If we draft Herbert in the fourth round of our fantasy draft and follow that pick up with Michael Pittman in Round 5, we need Herbert and the Chargers to have a great season while also needing Michael Pittman to develop chemistry with Matt Ryan and put up a strong year in his own right. In essence, we have placed two bets by drafting Herbert and Pittman: a bet on the Chargers having a good offense and a bet on Ryan’s connection with Pittman. These two bets are completely unrelated to each other. Herbert and the Chargers could have the league’s No. 1 scoring offense, and Pittman could be a total flop at his ADP.

Now, imagine we stacked Williams in Round 5 after taking Herbert the round prior. If Herbert is a worthwhile Round 4 pick as a high-end fantasy quarterback, this practically guarantees the Chargers have a very elite offense. And, if the Chargers have an elite offense, Williams is most likely healthy and catching a lot of touchdowns. By stacking Herbert and Williams, we have minimized the bets we need to get right. If our bet on Herbert is correct, then the probability of our Williams pick also working out skyrockets. By stacking, we have actually placed only one bet: the Chargers will be an elite offense in 2022. If the Colts struggle to pass the ball, it doesn’t affect Herbert-Williams at all.

For some of the number heads out there, no theoretical explanation will ever be good enough. Fortunately, the math behind stacking exists and is incredibly simple to understand.

If we draft Herbert and Pittman onto our roster, and one event happens: a 50-yard TD pass by LAC, then we can only expect 6 points — 6 points for Herbert and 0% chance Pittman caught the TD. Stacking helps us need fewer events to go in our favor to deliver fantasy points by correlating our QB with his pass-catchers.

Stacking naysayers generally default to the strategy being risky. This is true.

However, we aren’t aiming for fourth place in our 12-team league. All the money is in first or second out of 12 teams, which is why we shouldn’t hedge by taking Herbert and Pittman. We should all acknowledge that most of our teams won’t make money. On average, 1 in 6 (16.7%) of our teams drafted should come in first or second of 12 teams. If you can make that 1 in 5 teams (20%), you’ll make money playing best ball.

Aim for first or second 20% of the time, rather than fourth place 100% of the time. Your wallet will thank you in the end.

There will be players you believe are completely mispriced by the market, where you’re willing to draft them three, four, maybe even five rounds earlier than they currently go. However, it’s important to respect ADP; don’t reach more than half a round early in drafts or more than 1-2 rounds later in drafts.

For an idea of this principle in action, check out my recent article on eight of my favorite best ball targets at ADP. In that article, I provide which players I’d recommend drafting my targets over, so you aren’t reaching for players too heavily in your drafts.

If you’re a new user to Underdog Fantasy, click this link or use promo code FTN for a first-deposit match up to $100. I’d recommend 2-3 slow drafts (8-hour timer) and 2-3 inexpensive ($3 or $5) fast drafts (30 second timer) to get acclimated with player ADP and balancing roster construction with stacking.

Once you’re more comfortable with best ball, Underdog has amazing tournament offerings all spring/summer at a variety of price points ($5 entry fee all the way up to $250 entry fee). The tournaments are your best chance at winning serious money.

My best ball rankings will be up on FTN Fantasy within the week for you to reference when drafting.