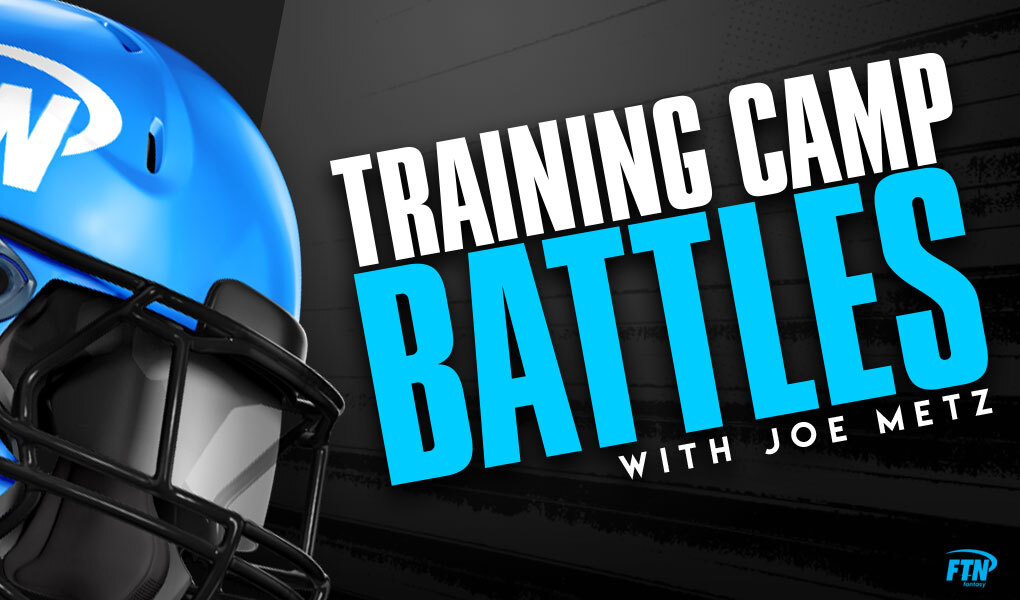 FTN's Joe Metz breaks down the position battles to watch at quarterback and running back around the league in training camp this preseason.

With the NFL preseason and training camp underway, we’ve seen reports left and right of a given player standing out in camp, we’ve seen highlight videos, we’ve seen injury news. This is a pivotal time in the fantasy football world, as the line between what’s impactful information and what isn’t tends to get blurred.

With so many positional battles generating all of this buzz, I highlighted those that are the most pivotal to keep an eye on as we approach the 2021 fantasy football season.

The rookie-quarterback battles in training camp are easily the most popular ones to pay attention to year-over-year and in 2021, we have a plethora of tight competitions.

Who will start for the 49ers? Trey Lance plays well in training camp

It’s hard to find a training camp battle that has drawn more attention than the quarterback competition in the Bay. Through the first two weeks of training camp, Trey Lance has looked like a bona fide QB1, per beat reporters:

As dazzling as Lance has been, the front office seems fixated on making sure that Jimmy Garoppolo gets his shot:

Whether he starts Week 1 for the 49ers or not, the overall stock for Lance (+300 to start Week 1, per FOX Bet) is only rising. His best ball ADP of QB13 on Underdog Fantasy has been rising by the week with the assumption that he will take the reins of the QB1 role in San Francisco sooner rather than later. His overall ADP of QB24, per FTNFantasy’s consensus ADP, makes him one of the highest-upside players at the tail end of drafts with very little risk given his Konami code playstyle.

Garoppolo, on the other hand, can safely be avoided as a QB target in drafts even if given the starting nod in Week 1, as we’ve seen how eager to run the ball the 49ers are when he’s under center.

Who will start for the Chicago Bears at QB? Dalton vs. Fields training camp battle

Similar to the aforementioned battle, this one is between a veteran QB who feels incredibly temporary and a Konami code rookie quarterback with electric upside. Also similar to the Niners’ situation are the Week 1 starter odds for these two on FOX Bet, as Andy Dalton sits as the -400 favorite compared to +280 for Justin Fields.

Unlike the Niners’ dynamic, however, there’s been a decent amount of praise for both quarterbacks in Chicago:

In the article above, Patrick Finley of the Chicago Sun-Times states:

“Dalton has looked like the most consistent quarterback Matt Nagy has ever coached in Chicago. That’s not to say he’s headed for stardom, or even that he’ll even be the starter on Thanksgiving. But he’s brought stability to a franchise that desperately needs it at the position, if only to buy Fields more time to incubate.”

Fields continues to impress, but if feels as though he won’t take over until the early weeks of the season at the very earliest, with mid-season being a more realistic target (contingent on Dalton’s play). Fields remains a QB2 stash in best ball and redraft formats given his upside, but one that you may have to wait a handful of weeks on.

Will Cam Newton start for the Patriots?

Of the three veteran/rookie quarterback battles, the Patriots’ one has the tightest odds in terms of who will start Week 1 with Cam Newton sitting as the -350 favorite and rookie Mac Jones sitting at +250 on FOX Bet. While the odds are obviously not close, per say, it shows that the book has more confidence in the rookie overtaking this positional battle than the aforementioned two.

Per Patriots beat writers, however, Jones has impressed:

Does that mean he’s the starter? To mimic what Tom Curran said in the interview, no, because Newton has also looked better than he did last season. As anticlimactic as this is, it feels like yet another “wait-and-see” similar to the prior two quarterback competitions. Unlike the other two, however, there seems to be a better chance that Newton starts deeper into the season if his passing has truly improved as the reports indicate in camp:

At their current Underdog ADPs, both Newton (QB29) and Jones (QB33) have merit in best ball formats (with a slight lean to Newton given his goal-line rushing upside), but both can be left alone in redraft at the moment.

Rookies aren’t the only quarterbacks putting pressure on the QB room. There’s a pair of quarterback battles among teams with tenured individuals that have a heap of fantasy implications tied to them as well.

Jameis Winston or Taysom Hill - Who starts at QB for the Saints?

One of the most talked-about positional battles, there are people hellbent that both of these players are going to start Week 1, but we have yet to receive an answer. If the decision is solely up to Sean Payton, his golden boy Taysom Hill could be considered a favorite, but FOX Bet has Jameis Winston as the -250 favorite and Hill as the +162 underdog. The injury to Michael Thomas seemingly could’ve shifted odds in favor of Hill considering his playmaking abilities, but that expected adjustment never happened.

This is a camp battle that feels like it could genuinely go either way. Both have reasons why it makes sense for them to be a starter, but both have had their struggles in camp, whether it be in the air or in the gauntlet:

Because of the complete lack of clarity or frankly, even a lean out of camp regarding who will start, this feels like a situation where both can simply be viewed as best ball stashes and left alone in redraft formats. If you want skin in the game on this quarterback battle, Winston is sitting at +1800 on DraftKings Sportsbook to lead the league in interceptions, a feat he accomplished in his last full season as a starter in Tampa Bay. There are certainly worse longshots to take.

If you want to talk about a tight race in a quarterback battle, look no further than the Denver Broncos. Per FOX Bet, Drew Lock is the current favorite (-162), but Teddy Bridgewater is on his heels (+125).

Want to know what really doesn’t help provide clarity? This:

Both have a path to being the starter. Lock has been around for two seasons and comes in as a potential post-hype sleeper now that he gets a healthy group of pass-catchers back in Courtland Sutton, Noah Fant and a second-year breakout candidate Jerry Jeudy. Bridgewater, obviously operating with the same receivers, was part of a trade package where Denver clearly showed interest in his upside in bringing him on board.

Because of this, both players will get a chance to earn their spot with preseason action:

Simply put, we won’t have a good idea of who will be starting for this team until we get a couple of preseason games under our belt.

Staying in Denver, we have a battle between a 28-year-old veteran only a couple of years removed from RB1 dominance and an exciting rookie. Both players are going to get their share of touches this season, the question, however, is what can we expect out of the gate?

As of now, Javonte Williams is going nearly two rounds ahead of Melvin Gordon in drafts. His performance in camp so far only solidifies this trend:

With that said, Gordon is still only 28 years old and is fresh off a season where he averaged 4.6 yards per carry and the first unofficial depth chart has him listed as the starter, backed up with confidence by a local beat:

From a fantasy strategy standpoint, it makes sense to get some shares of Gordon as an early-season asset with the Broncos having a favorable schedule, with two of the first three games being against the Giants and Jets run defenses. If he performs well, you may even be able to sell high. Don’t be surprised, however, if Williams has a similar coming-out like Jonathan Taylor in 2020 and smashes in the second half of the season.

Will Michael Carter start for the Jets in 2021?

Technically, there is “competition” here, but the deeper we get into camp, the more likely it seems that Michael Carter runs away with the RB1 spot early in the season, despite being listed as the RB2 on the team’s official depth chart. It also helps that Tevin Coleman’s contract (1 year, $1 million with a $100,000 signing bonus) is one that the team doesn’t need to squeeze every penny out of.

Plus, every report out of Jets’ camp is positive on Carter — his willingness and eagerness to learn, his big play ability, you name it, as the note below certainly doesn’t sound like something Coleman provides:

If you’re looking for a fantasy angle, Carter is still going in the eighth and ninth rounds in best ball drafts right now, making him a nice value under the assumption that he soaks up the majority of the early-down work, per our own Derek Brown:

As beautiful as the story of UDFA James Robinson was in 2020, there’s a chance that it comes to a screeching halt in 2021 with the addition of Travis Etienne. It certainly doesn’t help that Etienne already has familiarity with rookie quarterback Trevor Lawrence from their Clemson days, either:

What does instill an inkling of confidence, however, is the fact that the first unofficial depth chart shows Robinson as the RB1 (with Carlos Hyde):

While it may not be long-lasting (and likely isn’t), Robinson should still be involved enough early in the season to warrant a mid-to-late round pick as an RB3, while Etienne could solidify himself as a top-24 back by season’s end if he continues to surge in camp as reported. He’s also only $4,900 on DraftKings in Week 1 against the Texans’ league-worst rush defense, making him one of the most attractive Week 1 salaries to consider.

Will Raheem Mostert or Trey Sermon start for the 49ers?

Heading back to the Bay, we have another pair of electric young players, one being an oft-injured back who’s flashed his upside and the other an exciting young rookie.

To nobody’s surprise, Raheem Mostert is listed atop the first unofficial depth chart for the Niners:

Also to nobody’s surprise, he’s thrived in camp with a clean-bill of health:

Mostert’s ADP is a confusing one (consensus RB30), as it seems like he’s getting written off with the expectation of a committee and given his injury history. Mostert has thrived in a committee for the last two seasons when he’s been healthy, invalidating that reason for concern at his ADP, and attempting to predict injuries has never won anyone a fantasy football championship.

Where Trey Sermon could make his impact is in the passing game:

As that tweet alludes to, Sermon will be involved, as the RB2 always is in Shanahan’s committees. He also has elite RB1 upside should Mostert go down (and standalone flex value as-is), but Mostert is currently one of my top value picks in redraft formats at his ADP. Sermon is also a very viable piece in redraft (RB34 ADP) and best ball formats (RB27 ADP).