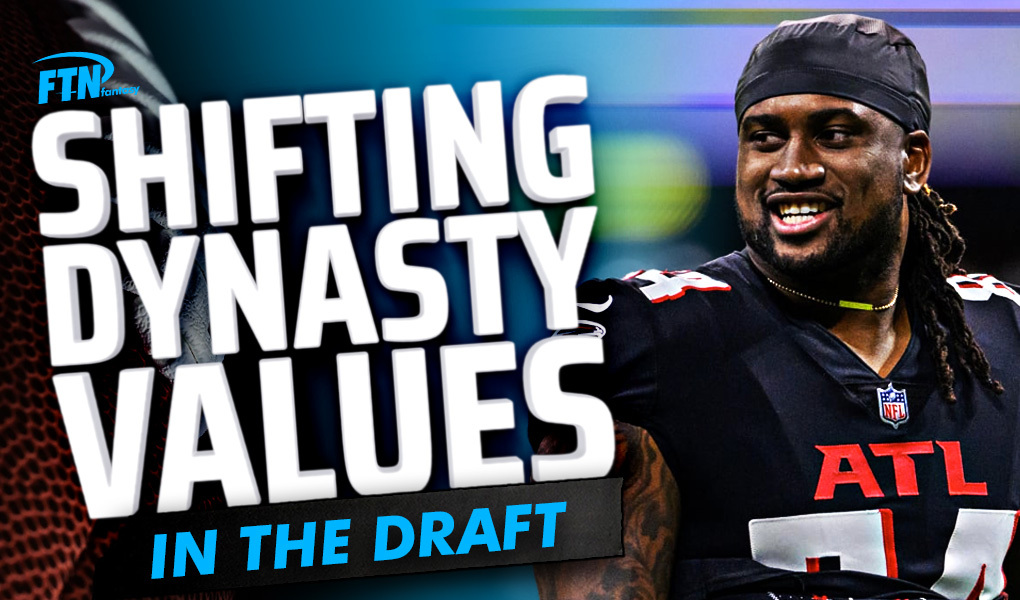 Dynasty Values That Will Change in the NFL Draft

FTN's Jeremy Popielarz highlights some players whose values in dynasty fantasy football leagues might change by the most based on what moves their teams make in this week's NFL Draft.

Of course, the rookies of 2022 aren’t the only ones whose futures will be largely shaped by what happens this week. Rookies finding jobs will displace or unseat veterans, changing their values going forward as well. With that in mind, below is a rundown of a few players on the preverbal "hot seat" as we head into Thursday night’s first round draft and beyond. Let’s take a look at who might see their dynasty stock change the most this week.

Last season the Panthers made a trade to bring in the former first-rounder Sam Darnold, but the experiment did not go too well. Darnold missed time for the fourth year in a row, putting up his second-lowest passing yardage (2,527) and tying his career-low in passing TDs (9) while throwing 13 interceptions. The Panthers do not have a ton of draft capital this year, which might buy Darnold one more season, but with the sixth overall pick and a bunch of Baker Mayfield “if they don’t draft someone” rumors, Darnold could find himself all but unemployed by the end of the weekend.

The quarterback the Seahawks got back in the Russell Wilson trade is already on the hot seat. Drew Lock played 24 games in his three years in Denver, putting up 25 touchdowns against 20 interceptions (including a league-leading 15 in 2020). He finished 8-13 as a starter in that span, 4-12 after a hot run to end his 2019 rookie campaign. The change of scenery could work out for Lock — currently, the Seahawks only have Geno Smith and Jacob Eason on the roster with him — but with multiple top-64 picks, Seattle could get their next long-term option in the draft, and that would push Lock’s value way down.

The NFL recent lea toward the committee-style backfields has opened the door for many role-specific players to find a home. It has also created more high fantasy floors, while limiting come ceilings. A lot of guys who might profile as full-time backs right now could find themselves in de facto committees after the weekend.

Last season, Cordarrelle Patterson emerged as a great asset for the Falcons. He was used as a hybrid player. lining up in the backfield and out wide as a receiver. However, it was clear the Falcons liked him in the backfield due to his 153 carries. compared to 69 targets. With five picks in the top 105, the Falcons may look to add a more traditional running back to the roster or even a scat/receiving back (this draft has a lot of those). Either way, adding a back in the draft would likely result in fewer opportunities for Patterson.

Devin Singletary might have the most to lose and gain this week of anyone. There has been a lot of talk the Bills will look to address the running back position again this season, even as early as pick 25. Many people are linking the Bills to Breece Hall. If this happens, the second-half breakout Singletary had would be forgotten quickly and he would fall to the fantasy wayside. The team has been looking to add size and power to the position in hopes to limit the hits Josh Allen has to take in short-yardage situations. Singletary has struggled in these situations, thus opening the door for any power back to come in and take a large role away from him, even if it is a second- or third-round running back.

This class is loaded with a ton of talented wide receivers who should be able to step in on Day 1 and steal opportunities from quite a few veterans. With the pass-heavy offenses in the league, teams are now looking to add as much talent to this position on their roster as they can. That means a lot of relevant names could find themselves in a battle for work right away.

Curtis Samuel arrived in Washington as a free agent last season to help add another playmaker outside. It did not go so well in year one. Samuel misses Weeks 1-3, then Weeks 6-11, then Weeks 12-18. Even when he was on the field, Samuel was never right—in five games, he totaled only 9 targets, catching 6 for 27 yards. He added 11 rushing yards in what was basically a lost season for the 25-year-old. After the poor season, and with little else on the depth chart beyond Terry McLaurin (and with contract questions around him), there is buzz the Commanders could be looking at a wide receiver in the first round. This would be terrible news for Samuel, especially after the team just re-signed J.D. McKissic, which largely ruled out any sort of third-down hybrid role for Samuel. He could ultimately make it out of the draft just fine and have a good role in this offense. but it seems like a stretch at this point.

Already entering his fourth year in the league we have yet to see a full season from Parris Campbell—he’s totaled 15 games in three seasons. He’s full of talent but has had an unfortunate run of injuries. Right now, he is set to be the Colts’ No. 2 wide receiver. When healthy, Campbell possesses a similar skill set to that of Calvin Ridley. This is important as we have seen Matt Ryan lean heavily on players like this throughout his career. However, the Colts have few needs around their roster. This opens up the window to address the wide receiver position as early as the second round. With a class that has quite a few players with similar skillsets to Campbell’s, he could be in trouble of losing his role to a rookie.