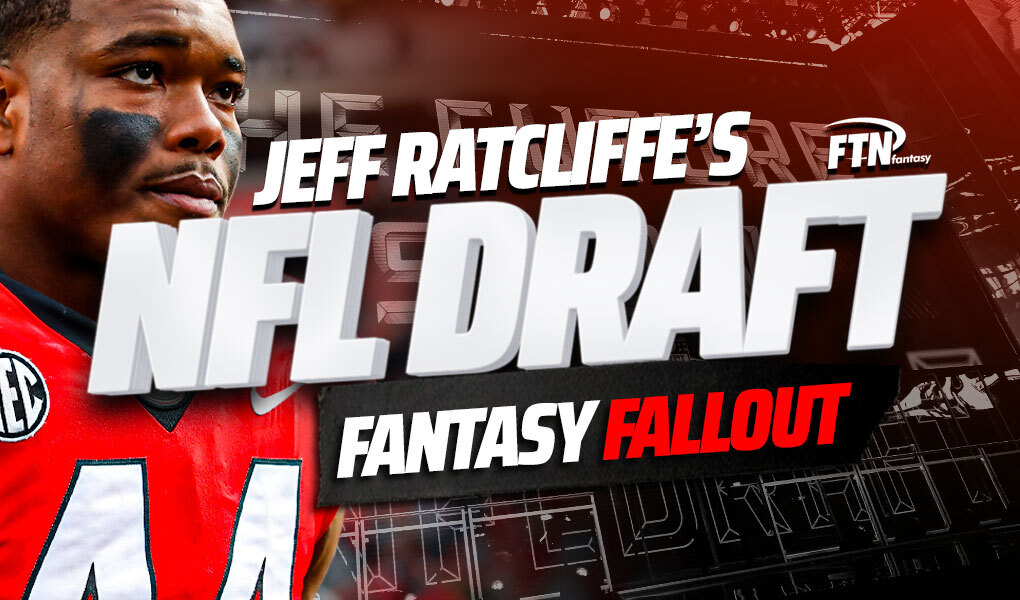 FTN's Jeff Ratcliffe breaks down the fantasy football outlook of each fantasy player drafted (and the big names traded) in Thursday's first round of the NFL Draft.

The Falcons addressed a major position of need and took Drake London as the first wideout off the board. From an opportunity standpoint, this is a great landing spot for the big-bodied receiver. He figures to see a big target share right from the gate with Olamide Zaccheaus previously occupying the top spot on the Atlanta wide receiver depth chart. That said, Kyle Pitts remains the top target. Perhaps the biggest challenge for London’s immediate value is Marcus Mariota under center. Still, he’s in a good spot to be one of the most productive fantasy options from this wide receiver crop.

Garrett Wilson has one of the highest ceilings in this year’s class, but there are a few things left to be desired about this landing spot. For starters, it’s a slightly crowded house with both Elijah Moore and Corey Davis already in house. While it’s fair to slot Wilson ahead of Davis, Moore still figures to be the top target for Zach Wilson. Of course, the second-year quarterback is the other question mark in this equation. If he doesn’t take a step forward, it’ll be tough for Garrett Wilson to produce viable fantasy numbers in the short team. Still, his overall upside makes him an appealing dynasty target in the earlier part of rookie drafts.

Following a 2021 campaign where the Saints had one of the worst wide receiver corps in the league, things are looking up. New Orleans added Chris Olave and will get fellow Ohio State alum Michael Thomas back on the field. Unfortunately, Thomas’ presence does relegate Olave to a No. 2 role in the target pecking order. However, he does bring different elements to the field from Thomas. Olave’s speed and precision route running bode well for early success. Of course, the Saints are far from stable at quarterback with Jameis Winston penciled in as the starter in 2022. Still, Olave is as clean as they come and is locked in as a top-5 rookie wideout.

The Lions traded up to get Jameson Williams, and how could you blame them? Not only does he possess world-class speed and the ability to take over games, but he also fills a big void on their depth chart. Detroit did add D.J. Chark in free agency to go along with Amon-Ra St. Brown, but Williams is an upgrade on Chark. St. Brown still figures to be the top receiver target in the short term with TE T.J. Hockenson seeing a big chunk of the targets. But Williams could certainly take over as the long-term No. 1. Of course, he’s coming off a torn ACL and could miss time in 2022. But don’t let that stop you from targeting him in dynasty rookie drafts.

Despite moving back in the first round, the Commanders still landed a wideout, pairing Terry McLaurin with a very similar player in Jahan Dotson. That’s a whole lot of speed on the field for Washington. But the big question in the short term is whether Carson Wentz can actually harness all of that potential. Historically, Wentz has fared better with bigger, wide-catch-radius receivers. Still, this is a great opportunity for Dotson to step into a big role immediately as the No. 2 option. At the same time, McLaurin and Wentz do place a cap on his overall fantasy football upside. This might be the worst landing spot of all the first-round skill position picks.

In the first of two big trades involving wide receivers, the Ravens shipped Marquise Brown to the Cardinals where he’ll slide in as the de facto replacement for Christian Kirk. Brown’s speed and playmaking ability are arguably an upgrade on what the Cards had in Kirk, and that’s great news for Kyler Murray. Brown slides into mid-range WR3 territory with major upside. His presence in Arizona does not impact DeAndre Hopkins, but it completely takes the wide out of Rondale Moore’s sails. Moore is now barely hanging on at the edge of the fantasy radar. As for Baltimore, this move certainly doesn’t help Lamar Jackson, but it does send Rashod Bateman screaming up the board. As the current No. 1 wideout in Baltimore, Bateman is in the back-end WR2 conversation.

At this point, we’re no strangers to blockbuster trades. The 2022 offseason has been one for the ages. But even so, this was a bit of a shocker, as Eagles GM Howie Roseman managed to land the star wideout for just the 18th overall pick and a third-rounder. For fantasy purposes, this isn’t the best landing spot A.J. Brown. He will slide in as the clear No. 1 option, but the Eagles are a run-based offense with a quarterback who isn’t likely to throw for much over 3,000 yards. Still, Brown’s ability puts him in the front-end WR2 conversation. At the same time, his presence does put a slight damper on Dallas Goedert’s outlook. He’s still a TE1 option but isn’t as desirable as he was just a week ago. Brown also puts a major cap on DeVonta Smith’s fantasy ceiling. Smith black slides down into WR4 territory.

Following the A.J. Brown trade with Philly, the Titans immediately drafted his replacement in Treylon Burks. Like Brown, Burks is physically imposing and capable of making things happen after the catch. While it’s easy to knock this landing spot due to the Titans’ run-heavy tendencies, the other side of the coin says that Burks has a clear path to the No. 1 job. Robert Woods is there, but Burks should blow right by him in the pecking order. And unlike Drake London in Atlanta, the Titans do not have a tight end who will compete with Burks for targets. Burks is the top fantasy wideout in this year’s class and should come off the board early in rookie drafts.

Surprisingly, the Steelers had their choice of signal callers at pick 20 and went with the kid from their backyard in Kenny Pickett. The most pro-ready signal caller in this year’s class, Pickett figures to compete with Mitchell Trubisky for the starting job in camp. While Trubisky may start some games, history tells us that first-round quarterbacks are a strong bet to start in their rookie seasons. When he does take over, Pickett with have a strong surrounding cast in Diontae Johnson, Chase Claypool, Najee Harris and Pat Freiermuth. While his long-term ceiling isn’t particularly high, he could settle in as a fairly consistent QB2 option if he sticks as the starter.

(Check out Josh Larky's Player to Watch in the Draft!)