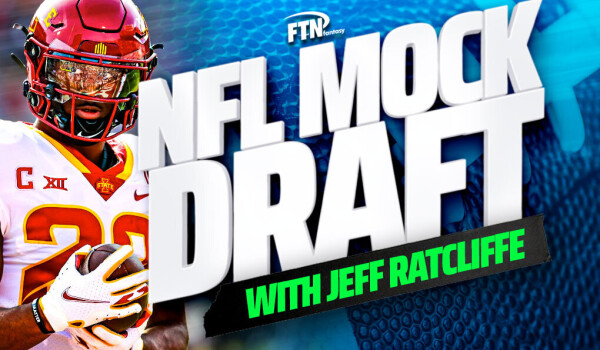 FTN's Jeff Ratcliffe draws up his final NFL Mock Draft and provides his analysis on each pick.

It’s NFL Draft week. The 2022 draft kicks off in just a few days, and this year’s selection meeting figures to be one of the most intriguing we’ve seen in recent memory. It’s time to unveil my final mock draft of the year.

As you read through the picks, keep in mind that my focus isn’t to get each pick correct. Rather, I treated this like an academic exercise where I aim to address team needs with players who are most likely to be first-round picks. Also keep in mind that I did not attempt to anticipate any trades in this mock draft. I also include each pick from Mock Draft 1.0.

While Aidan Hutchinson seems like the most logical choice here, the momentum seems to be building for a surprise. An offensive lineman like Evan Neal or Ikem Ekwonu are very much in play, but Walker has much shorter odds than either at just +200.

And with Walker off the board, Hutchinson stays in the state of Michigan. Edge seems like the most likely direction for the Lions in this spot, though they could really shake things up with a quarterback or even Notre Dame safety Kyle Hamilton.

The Texans need a ton of help, but anchoring their offensive line with the massive Neal seems like the most sensible starting spot for their 2022 draft. With Laremy Tunsil getting up there in age, this is a move for the future. Neal is currently the No. 2 betting favorite behind Ekwonu to go in this spot at +350.

Robert Saleh fills a hole on the defensive side of the ball with a top-flight corner in Gardner. He’s a major upgrade on Bryce Hall and is currently +300 to go No. 4 overall.

The Giants have Andrew Thomas at left tackle, but Ekwonu gives them some versatility to essentially play wherever they need him. He’s currently favored to go in this spot at +350.

Yes, this is a team in need of a quarterback. But there’s a very real possibility that the league may not be as high on this year’s top signal-callers as many in the fantasy community think. With the Panthers going this route, they’d have the start to a very mean secondary with Stingley joining Jaycee Horn.

Early in the NFL Draft process, some analysts had Thibodeaux in the conversation for first overall, so this is just value at this point. The Giants bolstered both offensive and defensive lines with their two picks.

Quarterback is certainly tempting in this spot, but it’s hard to see a scenario where the Falcons don’t try to address the most glaring hole on their depth chart. London gives them a big-bodied target who has the look of a true X-receiver at the pro level.

Another quarterback-needy team is up, but they too decide to pass on the position. Instead, Seattle grabs the rock-solid Cross, who is a plug-and-play starter for them.

It’s no secret that the Jets are in the market for an upgrade at wideout. Of course, that upgrade could end up being Deebo Samuel. Assuming no blockbuster trade goes down, Wilson would give them that upgrade. His elite athleticism would pair well with Elijah Moore and Corey Davis.

Like the Jets, Washington has made it clear that a wideout is in play with this pick. Williams gives them big-play upside and an overall profile that meshes well with what they already have in place with Terry McLaurin.

Like in Mock 1.0, I again struggled with where Hamilton lands. There’s no denying his talent, and this is likely too low. However, there are legitimately at least a dozen players who could go in the top 10 of this draft. However, if he does fall this far, Hamilton would be the heir apparent to Harrison Smith.

With an offensive lineman at pick 3, the Texans now bolster their pass rush with this high-upside prospect. Two needs down, several more to go.

John Harbaugh and Eric DeCosta add some girth to their defensive interior with the absolutely massive and freakishly athletic Davis. He’s a run-stuffer who eats up space with the best of them.

Will the third first-round wide receiver in a row be the charm for Philly? To be fair, DeVonta Smith showed promise last season, but their whiff on Jalen Reagor makes a wideout likely with one of their two first-rounders this year. Burks gives the Eagles a very different skill set than Smith. That contrast could have some very interesting results on the field.

Finally, the first quarterback comes off the board, and it isn’t Malik Willis. New Orleans is currently +400 to draft Pickett, which is the third betting favorite. He’s the most pro-ready signal-caller in this year’s class. While Pickett lacks the upside of some of the other top quarterbacks in this year’s class, he’s more than capable of taking over for Jameis Winston.

Having to face Patrick Mahomes, Russell Wilson and Derek Carr twice a year means you better have a good secondary. Right now, that’s one of the weak spots on this Chargers roster, so the physical McDuffie helps shore things up.

With Brandon Graham in the twilight of his career, the Eagles make a move for the future at edge with Karlaftis. McDuffie would have also been in play here if he was still on the board.

The Saints follow up their selection of Pickett with the best route-runner in this year’s class. Olave is a huge upgrade over anyone not named Michael Thomas on the depth chart.

Everything fell right for the Steelers in this mock, and they grab a high-upside signal-caller who will ideally be their quarterback of the future. Willis is far from a sure thing, but his dual-threat ability and massive arm make him extremely interesting.

The Patriots add some help in the trenches for Mac Jones. Penning may not have faced the highest level of competition at the college level, but he straight up dominated in the FCS.

Lloyd slips just slightly in this mock, and the Packers pounce. Lloyd would figure to slide right in next to De'Vondre Campbell as an instant starter for Green Bay.

Kyler Murray isn’t likely to be going anywhere anytime soon, so the Cards grab one of the top interior offensive linemen in the class to help bolster Murray’s protection.

Jerry Jones’ squad has a pretty big need at defensive interior, so they grab Wyatt here. He’s extremely well-rounded and would provide a big pop as an interior pass-rusher.

I’m determined to will this pick into existence and refuse to change it in any mock draft. The Bills have wanted to address the position for the past couple seasons. Devin Singletary is undersized, and Zack Moss just hasn’t panned out. In Hall, the Bills get a true three-down back who would make their offense even more dangerous. Sure, it’s a bit of a luxury pick, but Buffalo is in a position to make it.

Though slightly undersized, Dean is an absolute dynamo from a speed standpoint. He’d fit well on the weak side for the Titans.

It was extremely tempting to put a quarterback here, but I resisted the urge and gave them some help at EDGE. Mafe showed some big-time ability at the Senior Bowl. He addresses a major need for the Bucs.

With Davante Adams and Marquez Valdes-Scantling out of the mix, Green Bay needs to add some weapons for Aaron Rodgers. Dotson is a weapon indeed. His speed and playmaking ability fit well with Rodgers’ game.

Instead of getting a similar player to Tyreek Hill, the Chiefs go in a different direction with the height/weight/speed prospect. Watson would give Patrick Mahomes the type of weapon he has not had in the NFL.

The Chiefs address another position of need here. Hill is an extremely athletic safety who can also play nickel. He’d fill the gap left by Tyrann Mathieu.

A prototypical Iowa offensive lineman, Linderbaum is about as consistent as they come. Protecting Joe Burrow is a good thing.

Yes, Ridder is just the third quarterback to come off the board in the first round. At one point, it looked like five could be drafted on Day 1, but sportsbooks currently have the line at just 2.5 quarterbacks in the first. Don’t be surprised if it’s just three selected. As for the Lions, in Ridder they have a high-ceiling option who can sit behind Jared Goff and develop for a year.