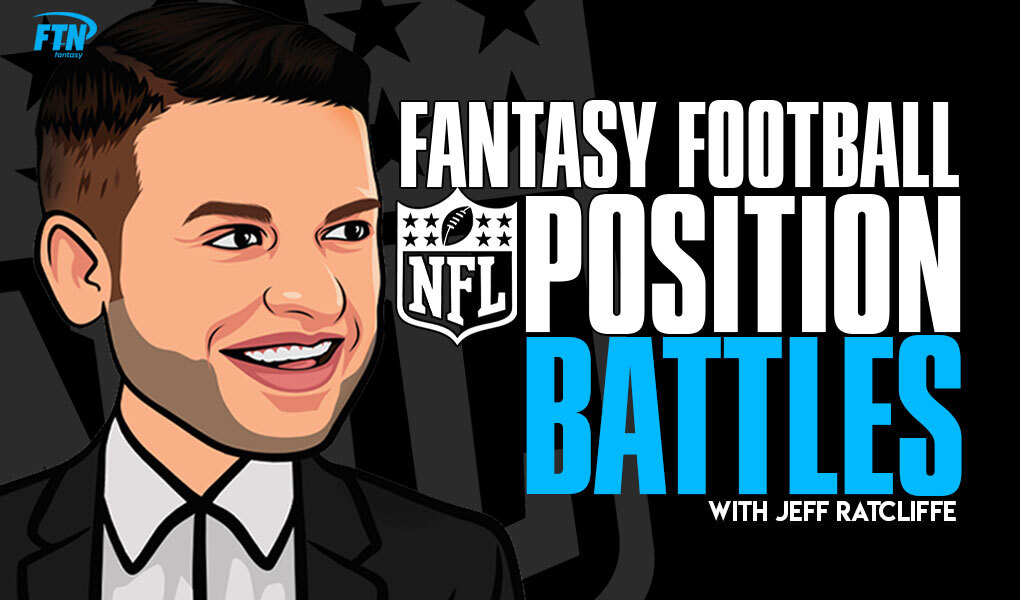 FTN's Jeff Ratcliffe looks at the fantasy football outlook for some of the NFL's more complicated backfields heading into the 2021 season.

A number of NFL backfield situations are fairly set in stone as we enter 2021. Barring an injury, guys like Christian McCaffrey and Dalvin Cook are locked in as the feature backs on their respective teams. However, there are several backfields in flux. There’s fantasy potential in most of these spots, but getting the correct back isn’t an easy task at this time of year. Here are the running back position battles to watch in 2021 fantasy football.

As much as fantasy football players want to will Chase Edmonds into a three-down job, the Cardinals offseason signing of James Conner makes that path very unlikely. Connor figures to step into the role vacated by Kenyan Drake. If that’s the case, Edmonds’ role would remain largely unchanged as the primary pass catcher with Conner handling more of the early-down work. That sort of touch distribution would be frustrating at best for fantasy purposes. Edmonds is the preferred fantasy option in ADP, but his role as a pass catch creates a fantasy football roller coaster ride of inconsistency.

There really isn’t a battle in this backfield, but it’s still a bit hard to believe that the Falcons will use a 28-year-old back who averages below 4.0 yards per carry in Mike Davis as their primary back. However, with Qadree Ollison, Cordarrelle Patterson, Tony Brooks-James, Javian Hawkins and Caleb Huntley as their other options, it would be very surprising if they went another direction. That said, we should keep an eye on any veteran running backs who get cut between now and the start of the season.

For now, Melvin Gordon sits atop the depth chart, but the operative words are very much “for now.” The Broncos selected Javonte Williams early in the second round of April’s draft, so we should expect a changing of the guard. At this point, Gordon is the favorite to open the season as the lead, but we can’t rule out Williams taking the job from him in camp. Regardless, this isn’t a matter of “if” but rather “when” Williams becomes the lead. At the very latest, that will likely happen by mid-season.

It’s tough to get excited about running backs on what looks to be the worst team in the league. It’s even more difficult to do so when those running backs are among the league’s oldest at the position. David Johnson enters the season at 29 years old and Mark Ingram is 31. Phillip Lindsay does have age on his side, but not by much, as he’ll be 27 this season. Older running backs plus a bad team with massive cloud hanging over at quarterback do not equal fantasy football value.

Perhaps the running back battle that has the biggest fantasy football implications, the Jags enter 2021 with James Robinson and Travis Etienne in their backfield. Robinson will forever be a fantasy cult hero for his 2020 breakout, but Urban Meyer’s first-round selection of Etienne really throws a wrench into the situation. If the new regime was that confident that Robinson was their guy, why would they draft Etienne in the first round? I don’t have the answer to that question, but I can say that Robinson is far from a lock to lead this backfield.

While this one might be painted by some as a battle, that might be a bit overblown. Sure, the Raiders did add Kenyan Drake in free agency, but his presence isn’t really a threat to Josh Jacobs’ role in the offense. Since drafting Jacobs in 2019, the Raiders have made it abundantly clear that they do not full trust him in the passing game. Jacobs had 20 catches in his rookie season and then caught 33 balls last year. The addition of Drake was essentially the team adding a pass-catching back who they can get in space. Drake will not threaten Jacobs’ early-down work, but his presence also means Jacobs’ role in the passing game will not expand.

This is just a mess. The Pats have Sony Michel, Damien Harris and James White returning. They also drafted Rhamondre Stevenson in April. Additionally, they’ll enter the season with essentially a running back under center in Cam Newton. We’re likely to see a three-man backfield of Michel, Harris and White to start the season with Stevenson a dark horse to see work. That committee plus Newton’s presence means fantasy value will be hard to come by in New England. I know just how shocking that is.

Heading into the draft, this depth chart was one of the worst in the league. At that point, the Jets featured Tevin Coleman, La'Mical Perine, Ty Johnson and Josh Adams. There were XFL backfields with more depth. However, unlike the Falcons, the Jets did draft a running back in Michael Carter. Though undersized, he plays big and can be a factor both in the run game and pass game. While Carter’s size is a bit of a concern, he’s positioned well to hit the ground running thanks to the lack of depth in this backfield.

Kyle Shanahan’s run game is one of the most potent in the league, but this backfield is far from solidified heading into 2021. Raheem Mostert and Jeffery Wilson return, and both showed flashes of major fantasy upside last year. However, both showed they were far from the most durable options. The 49ers also traded up to select Trey Sermon in the third round of April’s draft along with taking the extremely athletic Elijah Mitchell in Round 6. Like I said above, teams who are content with their incumbent options tend not to draft players at said position. Sermon and Mitchell are very interesting options to monitor through camp.

We wouldn’t paint Leonard Fournette or Ronald Jones as sexy fantasy options, but getting a piece of the run game of one of the league’s top offenses is very appealing. When we last saw this team, Fournette was cementing his legacy as Lombardi Lenny, but Bruce Arians has shown a propensity to keep going back to the well with Jones. Add to the mix Giovani Bernard and we have a bit of a mess on our hands. Unfortunately, this one may not get sorted and we could end up with a full-blown committee on our hands for much of the season.