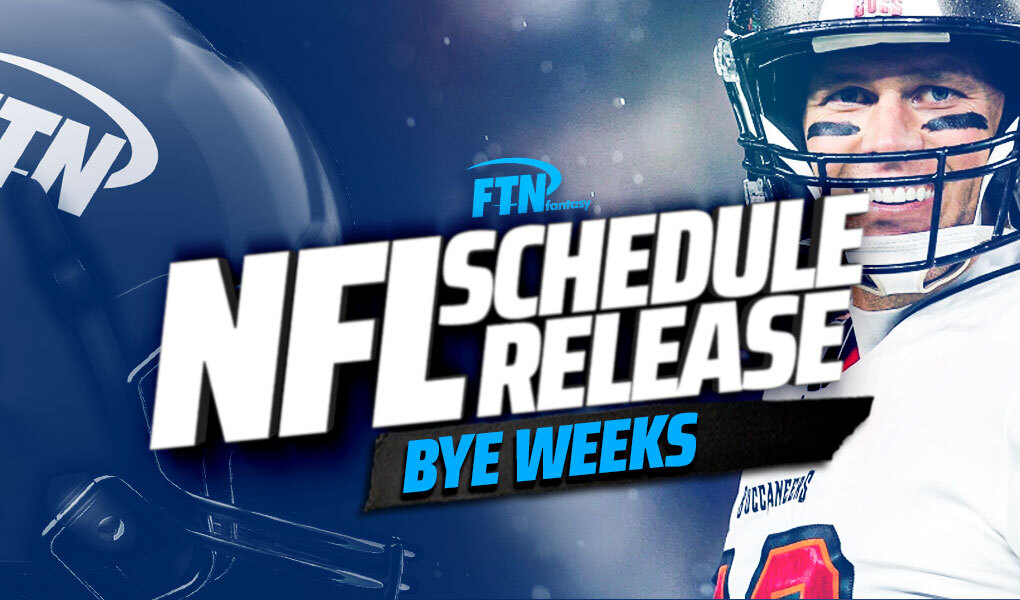 FTN's Daniel Kelley looks at each bye week in the 2022 NFL season to find the most problematic bye weeks and how fantasy managers should work around them.

There’s an argument to be made that the NFL schedule release day is the most overhyped day of the football calendar, because we know from the minute the previous season ends who everyone will be playing the next season. The schedule is just the order, and while that matters for fantasy football, it’s not that big a deal.

The biggest piece of information we get on schedule release day for our fantasy football purposes, though, is the bye weeks. Whether Patrick Mahomes is facing the Raiders or the Broncos in a given week is important, but whether he is playing at all matters way more.

So with the schedule well and truly in place and the bye weeks all sorted, today we’re looking ahead at the bye weeks for 2022. Should this change your draft strategy? Probably not, and if it does only barely. But it is worth being aware of the weeks when you’re going to have to plan ahead and/or scramble to fill a lineup because all your good players are spending a few days in Cancun.

The schedule expanding to 17 games over 18 weeks pushed the start of our bye weeks back. They used to start in Week 4 or 5, but for each of the last two years the first byes haven’t come until Week 6.

Key names on a bye (in order of their place in the FTN Fantasy rankings):

The only super-huge names on this list are Henry, a surefire first-rounder who will be tough to replace, and Adams, who might not have the ceiling he had in Green Bay but is still a locked-in WR1. Waller and Hockenson are both mid-range TE1 options, and while tight end drops off in a hurry, you can generally find a “plug and play and hope he falls into the end zone” option there. Swift and Jacobs could be squirrelly to replace as well. But there are no definite QB1s on bye in Week 6, so there’s that.

This is our first candidate for the Byemageddon Week of 2022. We have three of the top 12 quarterbacks and a whopping four of the top nine receivers in our rankings off in Week 7. If you are skating through Week 6 without big bye concerns, this would be a good week to stock up on fill-ins ahead of time, because you’re likely to be battling with half your league for the best available players in Week 7, and it’s good to get out ahead of it.

With only two teams on a bye in Week 8, we aren’t missing a lot of names, but we are missing some big ones, especially at quarterback, with two of the top three names in our preseason rankings sitting out. You can’t reasonably replace a Herbert or a Mahomes, so this will be a “do what you can” situation. Same goes for tight end, because the number of tight ends who can replace what Travis Kelce does pretty much sits at “I don’t know, maybe two?” and neither of them will be even close to available.

Six names on a bye is almost always going to at least border Byemageddon status, though this could certainly be worse — other than arguably the Browns and Cowboys, none of the Week 9 bye teams is exactly a fantasy powerhouse. And while Watson is a big player to be without, that idea is predicated on him even being active in the first place as we await an announcement on a likely NFL suspension. Harris, Chubb, Lamb and Samuel are all-world fantasy options, and there are a world of RB2 options sitting this week, but Week 7 is still our true Byemageddon so far.

The Bengals are suddenly a star-laden offense, so being without Burrow, Mixon, Chase and Higgins (and Tyler Boyd) is a rough week. And the Ravens are very stars-and-scrubs, but Jackson and Andrews in particular are tough to replace. Meanwhile, the Patriots and Jets could both be fully competent offenses in 2022, but neither promises much in the way of fantasy superstar options, so we’re pretty solid on this week.

The tight end list could grow here if the Buccaneers (as expected) end up bringing Rob Gronkowski back, but absent that, the real crusher here is wide receiver, where five of the top 18 in our preseason rankings will be sitting out, and that’s without the Jaguars even contributing anything to the list. Running back is a dry list after Fournette, as is quarterback after Brady, but the mass of wide receiver absences could create a waiver-wire bottleneck in Week 11.

The Panthers don’t have many fantasy options, but the ones they do have — McCaffrey and Moore — are star-to-superstar players, so their absences will hurt. Meanwhile, the Cardinals will have Hopkins back from his suspension by this point, so this is a full offense that will be removing a lot of names from fantasy rosters. Thankfully Murray is the only quarterback of note who will be gone, so the waiver wire should be fairly fresh, especially since no one will have to panic-add in Week 12.

The key thing about a Week 14 bye: In most leagues, it’s the last week before the fantasy playoffs, which means it’s a crucial week for fantasy player to be without key players (in other weeks, it’s the start of the playoffs, which is even worse). Of course, Jonathan Taylor fantasy managers are used to this, because the Colts had a Week 14 bye in 2021 as well. After Taylor, Rodgers and Pitts, Week 14 isn’t down a lot of superstars (especially at quarterback), but the list of names sitting out is deep, and could look worse is some of the key rookies (London, Olave and Watson) pop as the season progresses.

Which Week is the 2022 Byemageddon?

The two contenders here are Week 7 (Bills, Rams, Vikings, Eagles out) and Week 9 (six teams). But the worst week for the waiver wire is definitely going to be Week 7. Three top-12 quarterbacks and four top-nine receivers all off at once? You don’t necessarily need to plan around Week 7 in your draft, but this is 100% going to be a week where you plan ahead on your waiver wire and start making claims in Week 6 or earlier.