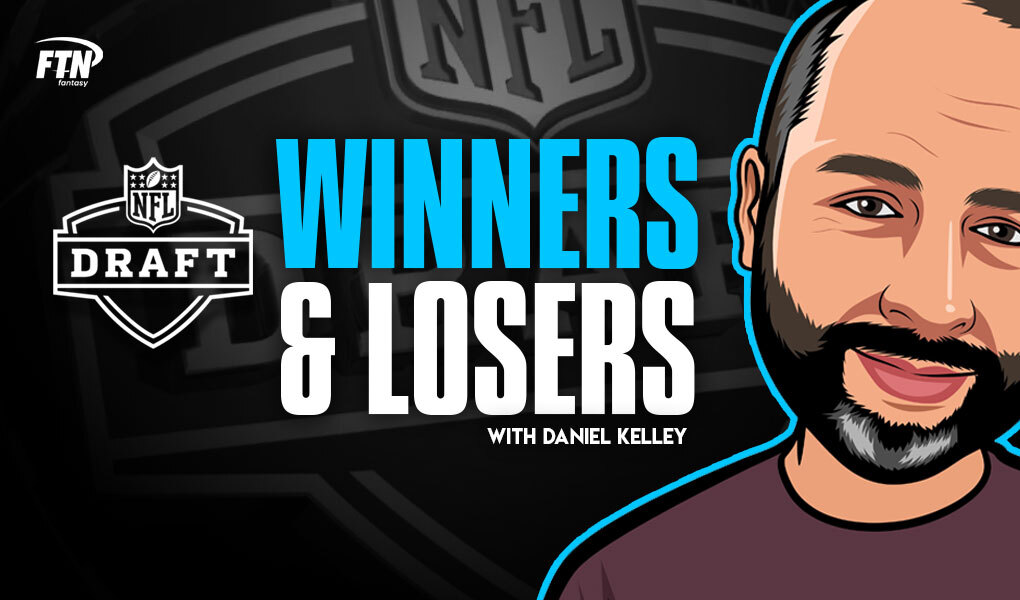 FTN's Daniel Kelley identifies the veterans who saw their fantasy value move the most over the course of the draft, either for the better or for the worse.

Every year, the majority of the focus coming out of the NFL Draft, for both fantasy football and real life, lies with the players drafted. With 250-some careers are started over a three-day span, that makes sense. But for every career that starts, another has to end, and for every new full-time job acquired, someone else has to become a part-timer.

With the draft in the rearview mirror, then, it’s time to take a look at the winners and losers from the weekend on the veteran side. These are the fantasy names whose stock rose or fell the most as a result of what their teams decided to do in the draft.

The Chiefs were favored in the Super Bowl, but the tattered remains of the offensive line had Mahomes running for his life and doomed the team. Enter Joe Thuney (via signing), Kyle Long (via unretirement) and Orlando Brown (via trade). And now, enter Creed Humphrey, the ex-Oklahoma center. The biggest weakness on the roster has become one of the league’s better units over the span of a couple months. Mahomes was already fantasy’s QB1. But now, he’s … even QB1-er.

The best receiver Jackson’s had in his career is Marquise Brown. The second-best is … Willie Snead? The remains of Dez Bryant? The point is, no, Jackson hasn’t been the most target-his-receivers quarterback, but then he’s not really had the receivers to throw to. So the Ravens still have Brown, signed Sammy Watkins and now drafted Rashod Bateman and Tylan Wallace. Jackson’s probably never going to be the most pass-happy quarterback, but he has the best weaponry of his career now, and not by a little.

The Panthers didn’t draft a new quarterback, they traded Teddy Bridgewater to Denver, and they brought in Terrace Marshall Jr. into the same offensive system he played with under Joe Brady at LSU? Darnold having this stable of weaponry after what he had with the Jets is like those videos of babies who get implants and hear sounds for the first time.

There was no real question that the Falcons would draft a running back, not after Todd Gurley, Ito Smith and Brian Hill left this offseason, with only Davis replacing them. Only, they … didn’t. Davis has exactly one 100-yard rushing game in his career, back in Week 4 of 2018, but he was plenty productive on the ground and through the air last year after Christian McCaffrey got hurt. And … there’s no one else.

Penei Sewell might have been one of the two or three best players in the draft, talent-agnostically. But with the excitement of the quarterbacks and other offensive skill players, he fell to seventh, which is perfect for Swift and the Lions’ running game. Also perfect? The team didn’t take a receiver until Amon-Ra St. Brown in the fourth, and while that might mean St. Brown leads Lions receivers in targets, a receiver corps of St. Brown, Tyrell Williams, Breshad Perriman, Quintez Cephus and Geronimo Allison is a “run the ball a lot” receiver corps.

Like the Falcons, the Dolphins were rumored by pretty much everybody to be taking a running back. And like the Falcons, they didn’t. (Well, almost didn't. They grabbed Gerrid Doaks in the seventh round. I'm not about to say Doaks changes the point here.) Gaskin popped last year when healthy, and the only new name in the backfield with him is Malcolm Brown. Add in second-round T Liam Eichenberg and more receiving threats in Will Fuller and Jaylen Waddle, and Gaskin should have more room to run.

The list of winners at running back is a lot of “their team didn’t get anyone else, so…” In the case of Davis and Gaskin above, they have the jobs largely to themselves. In the cases here, the guys have someone else already there to battle with. But it’s still better than have a third guy to deal with.

For fantasy purposes, Cam Newton — even the most-of-2020, can’t-pass-well version — is still a fine option because his legs haven’t gone anywhere. But that version of Newton can produce exactly zero good fantasy names. And Mac Jones isn’t likely to ever offer anything remotely close to the fantasy ceiling Newton has, but he can throw the ball to his options. Agholor is the de facto No. 1 receiver in New England, and having a quarterback who can get him the ball puts him on the fringes of fantasy relevance.

The Titans saw Corey Davis, Jonnu Smith and Adam Humphries all leave this offseason, and Reynolds was the only free agent replacement the team brought in. An early pick spent on an upper-level receiver, an Elijah Moore or a Rondale Moore, could have had an instant and significant impact. Instead, the team didn’t take a pass-catcher until Louisville’s Dez Fitzpatrick in the fourth round. Reynolds had a few bright moments in Los Angeles when one of the starters or another ahead of him was banged up. Now, he doesn’t have to wait for the opportunity. Now it’s all opportunity.

Everything I wrote about an inch above this about Reynolds applies to Firkser, who is now the No. 1 tight end on a team that produced a fine tight end in Jonnu Smith last year and hasn’t replaced the departure. Firkser is a very interesting super-late flyer in drafts this year.

It’s hard to talk about the Watson situation on a fantasy site given the whole not-football-ness of it. But the fact that the Texans didn’t have any pick at all until the third round and then — despite having a very bad roster almost across the board — used that pick on a quarterback should be pretty informative.

For about three of the four hours of Thursday’s first round, Robinson could have dreams of having a superstar quarterback in rookie Trevor Lawrence and a much more productive offense around him with only Carlos Hyde battling him for targets. It was a good life for the undrafted free agent from 2020 who finished as the PPR RB7. And then it all fell apart when the Jags made their second first-round pick, taking Lawrence’s Clemson teammate Travis Etienne. Urban Meyer and the Jags can say they want all three backs to produce and get time all they want, but even the absolute best-case for Robinson has him as a high-end flex/low-end RB2 now, and there are worlds of floor below that. He was a first-/second-round fantasy pick a few days ago. Now? He probably won’t go in the top seven or eight rounds.

When your backup is Mike Boone, you’re the undisputed RB1 in your backfield and will get plenty of work and plenty of production. When your backup (?) is Javonte Williams, you … might not be the starter anymore? Gordon’s days as a relevant fantasy running back have outlived Todd Gurley’s days, but apparently not by much.

Maybe these two with just Trey Lance added into the mix would have been electric — we’ve seen overall running games spike when a team moves to a more mobile quarterback. But we’ll never really know how just Mostert and Wilson would have fared, not with the drafting of Trey Sermon in the third and Elijah Mitchell in the sixth (not to mention the signing of Wayne Gallman a few days ago). It appears we’re in for more of the same in the 49ers backfield, where 4-5 different guys have occasional fantasy-relevant weeks, but as soon as you commit to one of them, the next one pops up. Enjoy fantasy frustration.

When Coleman signed with the Jets, I wrote that while Coleman seemed done, the fact that one of his coaches in San Francisco, Robert Saleh, was calling the shots in New York said that at least one person in the know still believes he has something in the tank. And through the first two days of the draft, it seemed like maybe Coleman would get a real shot, with the Jets going QB-G-WR over Thursday and Friday. Even if Coleman wasn’t going to be a star in New York, having the job was reason enough to be interested. But the team kicked off Day 3 of the draft by taking North Carolina’s Michael Carter, and while you hesitate to call a fourth-round anything an important part of an offense, it’s hard to imagine Carter isn’t heavily involved in a hurry. Coleman will be the No. 2, but that’s not going to carry much value.

The Bengals could have gone with Penei Sewell early and taken a different receiver later, and if they had done that, Boyd and Higgins would both be WR2/high-end flex options. Instead, they went Ja'Marr Chase in the first and Jackson Carman in the second, and while that strategy is also fine, it does mean Boyd and Higgins have to get downgraded, with neither warranting a sure starting job in fantasy lineups.

The current regime in Miami chose Will Fuller. They chose Jaylen Waddle. They did not choose Parker, who is 28 and has exactly one season of 800-plus yards. Fuller’s only on a one-year deal in Miami, so maybe Parker even outlasts him, but for 2021, you’ve got to think Parker has the best chance at being the odd man out.

DeAndre Hopkins is great, obviously the No. 1. Has Kirk shown enough to be the sure No. 2? Well, he’s still only 24, and the calcified remains of A.J. Green aren’t likely to matter much. On the other hand, Kirk is three years into a career and has a max of 709 yards. Rondale Moore, the team’s second-rounder, could easily become the No. 2 over Kirk, Green and the rest of the receivers in Arizona, and he could do it fast.

Jackson’s got to be on his last chance in the league, even if “insanely fast and always a threat for a huge play” is forever appealing. Playing only eight games over two seasons and being 34 years old is not the recipe for a huge amount of faith in football circles. But the skill set Jackson offers when healthy is a different one than what Robert Woods and Cooper Kupp offer in Los Angeles, so he has a role. But Van Jefferson is still around, and the team also dropped a second-round pick on Louisville’s Tutu Atwell, who is absurdly tiny (by football standards) but also absurdly fast. If Atwell can develop and/or Jefferson pops, don’t be surprised if Jackson doesn’t even make it to Week 1.

Well, he was the Falcons’ No. 1 tight end, and now the have the most exciting new tight end to enter the league since forever. Sorry Hayden.

Daniel Kelley was a finalist for the FSWA award for Best Fantasy Football Series of 2019. He has worked at Pro Football Focus and SB Nation, and he has written a novel trilogy called AFTER LIFE, available now from all booksellers.