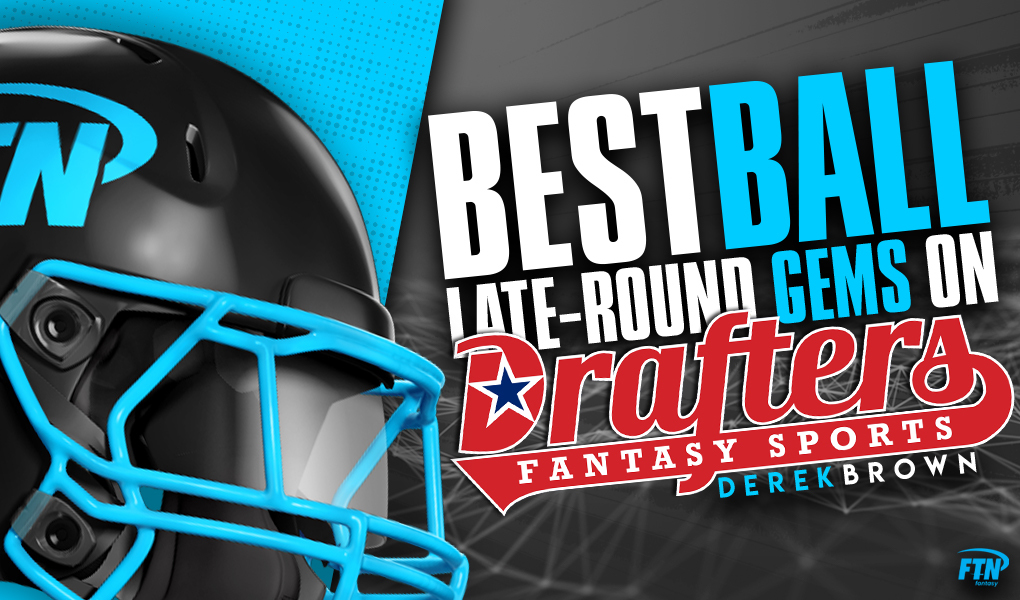 Every fantasy football season, we mine the later rounds of drafts hoping to strike gold. Last year’s later rounds were plentiful with breakout players like Chase Claypool.

This year we have a new crop of new and familiar faces to target with the last picks of our Drafters rosters. Let’s dive into the players who could sparkle as late-round gems in fantasy football in 2021.

Rhamondre Stevenson has finally been getting the headlines after smashing the preseason. This preseason, Stevenson and his 7.7 yards per carry and four rushing scores have shown that he won’t last long in the later rounds. His ADP will climb, but with many scared of the Patriots’ backfield after being burned in multiple seasons, it likely doesn’t rise high enough. Stevenson’s impressive performances made moving Sony Michel an easy decision. With his underrated pass-catching chops, he can serve a dual-threat role that neither Damien Harris nor James White is capable of while having the upside to steal work from both players.

Ty Johnson’s ADP has been criminal all offseason. With the general assumption that the Jets deploy a committee approach to the backfield, Michael Carter and Tevin Coleman have received the respect of best ball drafters, but Johnson has been left out in the cold. In Week 2, Coleman split the first two drives with Johnson, with each player receiving six snaps with the first team. Even if Johnson doesn’t take this backfield over and provides us with only 2-3 usable weeks in best ball, that is still fantastic considering his draft position. With his 86th percentile speed score and familiarity with a zone rushing scheme, Johnson should be drafted 2-3 rounds earlier. Continue to enjoy the massive discount.

As the news of Tony Jones possibly supplanting Latavius Murray makes its rounds, his ADP could creep up. Even a slight escalation would still land him in this category as he doesn’t have an ADP on Drafters at the moment. The news of Jones taking this job from Murray shouldn’t overly shock anyone as Murray looked every bit the part of a running back that was slowing down last season. Per FTN Data last season, among 34 running backs with 120 or more rushing attempts, Murray ranked 30th in yards after contact per attempt. Jones has shown this preseason with his 8.8 yards per carry and 2.0 yards per route run (on a limited eight targets) that he deserves this role. Last year, Murray garnered 39.7% of the rushing work. Behind a top-five offensive line that puts Jones in the high-end handcuff and flex-worthy tier automatically.

The door is slowly swinging open for Amon-Ra St. Brown to possibly have a larger early-season role than many might expect. D’Andre Swift and Breshad Perriman have been banged up, and now Tyrell Williams is dealing with a groin injury. T.J. Hockenson looks cemented as the team’s top target, but targets have to go somewhere after Hockenson. St. Brown could emerge as the second option in this passing game early in the season. He’s been lining up in the slot on 70.6% of his snaps this preseason and will work the intermediate routes over the middle that Jared Goff likes to target.

K.J. Hamler is a fine dart to throw late in drafts. He will come screaming out of the slot with his 4.3 speed in Denver this year. He’s already been crushing the opposition this preseason with 14.5 yards after the catch as Denver’s downfield weapon. In two weeks of preseason action, his aDOT sits at 22.3 yards. This might sound like a detriment attached to Teddy Bridgewater. While Bridgewater doesn’t go deep often, he is accurate when doing so, ranking 13th last season in deep ball completion rate. With Courtland Sutton still on the comeback trail from injury and Tim Patrick being shopped in trades, Hamler has a clear path to compete for targets with only Jerry Jeudy and Noah Fant.