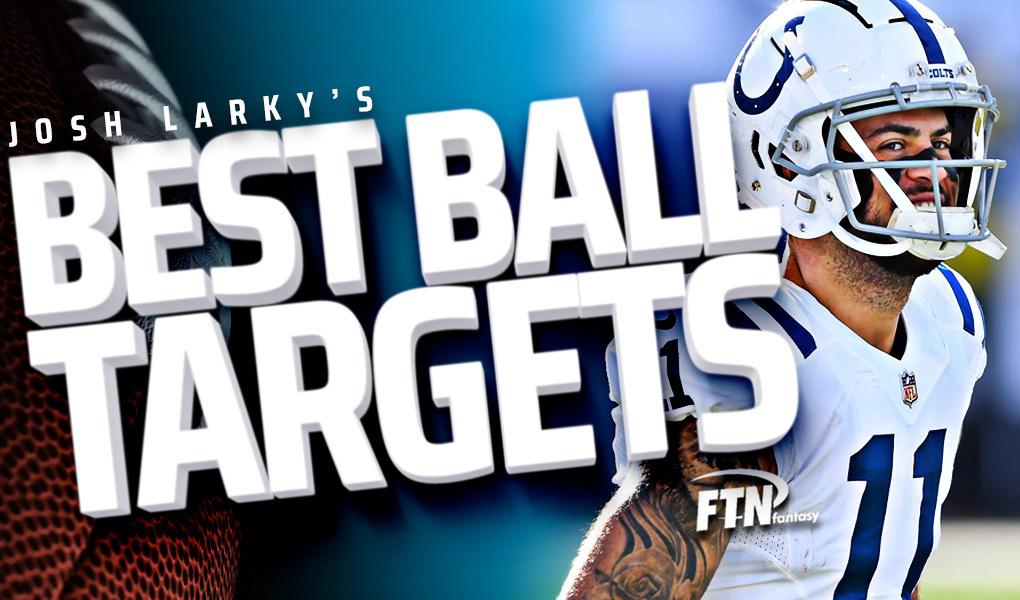 FTN's Josh Larks picks out eight of his favorite players to target in early best ball drafts for the 2022 fantasy football season.

When participating in best ball drafts in April — nearly five months prior to the start of the NFL season — player ADP is wildly inefficient. That gives us an opportunity. Below, I’m breaking down eight players I’m heavily targeting in my 2022 drafts.

More important than the players themselves though, is my process. I couldn’t be more excited to join the FTN team, and for those unfamiliar with my previous work, I always outline my thought process and the research I’ve done. When you read along with my content, I want you to get a window into how I think about players’ range of outcomes, both logically and with the stats to back it all up.

When searching for fantasy points from your RB, many mistakenly look at total RB touches. The big issue: Not all RB touches are created equally. Let’s briefly discuss the difference in value among RB touches, then highlight two players who should be going much higher in current best ball drafts.

If we look at the 2021 regular season and use half-PPR scoring (like Underdog Fantasy), we find that you really want your fantasy RB active in the passing game and utilized in the red zone. For the table below, red zone is defined as within 20 yards of scoring, and goal line is within 5 yards of scoring. We can interpret the top left of the table as the average RB carry was worth 0.6 half-PPR fantasy points in 2021.

Leonard Fournette is the current RB16 on Underdog and finished the season as the RB6 per game (min. 12 games). Nothing about his situation has changed. He’s still the goal-line back and the pass-catching back on an elite offense. He tied with D'Andre Swift for most targets per game (6) and was third in the NFL with 3.9 red zone touches per game.

Speaking of Swift — who was faded last season for potential workload and injury concerns — we have this year’s Swift in Travis Etienne, the current RB23 by Underdog ADP.

Etienne has the requisite size, speed, draft capital, pass-catching and goal-line chops needed to thrive in fantasy football. He’ll be playing with his college QB in Trevor Lawrence, who offers the rare combination of mobility (keeping linebackers honest to improve his RB’s yards per carry) and a willingness to target his backs (Etienne had over 1,000 receiving yards across his final two seasons in college).

Remember, based on the table above, 10 carries and 5 targets from Etienne are more valuable in half-PPR than 15 carries and 2 targets, even though many still gravitate toward carries and total touches — suppressing Etienne’s ADP.

Michael Pittman currently goes as the WR27 in drafts, yet he was the WR23 per game last season in half-PPR leagues. Better yet, his 25.7% target share was 13th in the entire NFL, and his 31% team air yards share was 19th.

All the peripherals are there for Pittman, who also had nearly as many yards after the catch (346) as bona fide speedsters like Darnell Mooney (381) and Brandin Cooks (355). So, what held him back in 2021?

Carson Wentz and gamescript. The move from Wentz to Matt Ryan cannot be understated, and Pittman is a major offseason winner. Ryan has supported high-end fantasy production for numerous alpha WRs over his career, and Pittman should be next in line.

Additionally, the Colts had the fifth-lowest pass rate in the NFL last season, but there are two reasons this is likely unsustainable. First, defense is not sticky year to year, and last year’s strong defense is often next season’s middle-of-the-pack unit. It’s why we have so much trouble predicting which fantasy DSTs are the ones to take preseason.

Next, we have Jonathan Taylor, who led the NFL in carries, rushing yards, rushing touchdowns, yards from scrimmage and total touchdowns. If anything happens to Taylor, a certified bell cow at an incredibly fragile position, the Colts will have to pass more. There are multiple avenues breaking in favor of Pittman’s 2022 fantasy production.

Allen Robinson is the other disrespected alpha WR you need to draft, going as the WR31 off the board. Before dealing with a lack of motivation and a team he reportedly truly hated in 2021, Robinson was utterly dominant, and people have clearly forgotten this based on his ADP. Only two receivers topped 150 targets in both 2019 and 2020: DeAndre Hopkins and Robinson.

Initially, it may sound strange to recommend the WR slotting into the “Robert Woods WR2 role” when Woods was so disappointing all of last year prior to his ACL tear…

Until you check the stats and see that Woods was quietly the WR16 per game in half-PPR prior to his injury. Robinson is most likely better than Woods at this point in his career, has shown a demonstrably higher ceiling in fantasy than Woods, and will have just turned 29 when the season begins. In other words, Robinson should still be in his prime for the 2022 season.

Like Pittman, Robinson will enjoy a massive QB upgrade in 2022, going from Justin Fields/Andy Dalton in Chicago to Matthew Stafford in Los Angeles. The best bets for high-end WR production are those who have done it before, and Robinson certainly has, with four seasons over 150 targets and three over 1,100 receiving yards.

Courtland Sutton falls under the Cooper Kupp/Robert Woods corollary. When an entire offense gets a massive QB upgrade, you want pieces of that offense since the market won’t know how to properly value them.

I drafted a lot of Cooper Kupp last season, purely because he went half a round later in drafts than Woods, and I really wasn’t sure who would perform better with Stafford.

Jerry Jeudy is the current WR18 in drafts, yet Sutton goes at WR25, over a full round later. Russell Wilson throws a beautiful deep ball; he’s the only QB with a 6% or higher TD rate each of the past 5 seasons. It just so happens that Courtland Sutton’s average target depth was also near the top of the league in 2021.

Looking at half-PPR points per game, DK Metcalf and Tyler Lockett finished as the WR9/WR11 in 2020, and then the WR15/WR20 in 2021, despite Geno Smith playing an entire month due to Wilson’s mallet finger injury. Remember, Sutton is going as the WR25, yet he put up 72 catches for 1,112 yards and 6 TDs with Joe Flacco, Drew Lock and Brandon Allen in 2019, before an ACL tear robbed him of his 2020 season. 2021 was the recovery year, playing with Teddy Bridgewater, and Sutton will be all systems go with Wilson in 2022.

Lamar Jackson is the current QB4 based on ADP, yet he’s led all QBs in carries per game each of his four years in the league. Knowing carries are more than twice as valuable as pass attempts, Jackson’s 11 carries per game in 2021 is the equivalent of roughly 25 additional pass attempts per game from your QB.

Jackson set a fantasy-points record in 2019 with over 28 per game, and that passing offense comprised rookie Marquise Brown, second-year Mark Andrews and Willie Snead. In 2022, Jackson is throwing to fourth-year Brown, fifth-year Andrews and second-year Rashod Bateman, a clear supporting cast upgrade.

Jalen Hurts is the QB11 in drafts right now, yet he finished 2021 as the QB6 per game. He had bottom-five offensive weapons last season, as both Jalen Reagor and Quez Watkins played healthy snaps at WR in 2021. The Eagles have three picks in the first round of the 2022 NFL Draft, and all reputable mocks have them taking a WR with one of those picks (usually, it’s stud Ohio State WR Garrett Wilson).

Hurts will be entering his second season as the full-time starter, a point in his career that many QBs take a major leap forward. Also, Hurts had the most QB rush attempts overall last year, and the second-most per game behind Lamar Jackson.

Jakobi Meyers goes off the board as the WR55 in best ball drafts, even though he’s the clear WR1 in an emerging offense. (And yes, I still say “clear WR1” even with DeVante Parker now in town — Meyers had a higher target share last year, already has familiarity with Mac Jones and has a cleaner injury history.)

He also had an 18% red zone target share, so contrary to popular belief, the Patriots did not “avoid” Meyers in that area of the field. New England simply did not pass much in the red zone in 2021, likely due to Bill Belichick having a rookie QB in Mac Jones. The Patriots passed the ball only 43% of the time inside the 20-yard line last year, 26th in the NFL.

Expect Meyers to continue commanding targets in a passing offense that grows increasingly more comfortable in 2022.