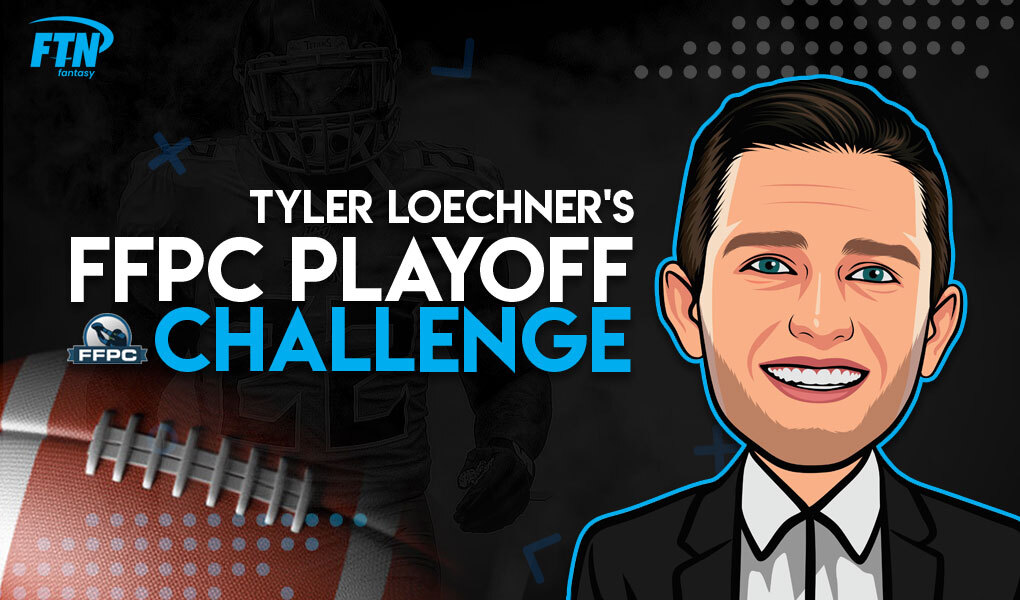 FTN's Tyler Loechner breaks down the strategy and key players to use in fantasy football for the FFPC Playoff Challenge second challenge, starting with the Divisional Round

For this round, you’ll pick eight players — one from each remaining team — featuring 1 QB, 2 RBs, 2 WRs, 1 TE and 2 flex (RB/WR/TE). You can take a look at the official rules and scoring settings here.

You set your lineup once (before 4:35 p.m. ET on Saturday) and it stays that way for the rest of the playoffs. Come take on my team: Loechner’s Peaches 2.

Breaking down the FFPC Playoff Challenge

Last week, I wrote a lengthy breakdown of the FFPC Playoff Challenge, and most of what I said for the remaining eight teams remains the same. So be sure to check out that article for specific player notes.

Updated odds of each team to make the Super Bowl

Below are the odds of each team to make it to the Super Bowl.

The Chiefs got their easiest possible matchup for the Divisional Round against the Browns (they are 10-point favorites), making their odds of playing two or more games the best of any of the either remaining teams. … Patrick Mahomes (16%) was the second highest-owned QB in the full-slate FFPC challenge. … Travis Kelce (66%) is the chalkiest TE by far thanks to the 1.5 PPR TE premium. … Tyreek Hill (16%) has equal ownership to Mahomes, but I would expect Mahomes to draw even more in the FFPC2, making Hill the lowest-owned of the bunch.

The Packers are big 7-point favorites, giving them solid odds of playing two or three games. … Davante Adams (71%) was the highest-owned Packers player, by far, in the main slate, but a Divisional Round date with Jalen Ramsey will see his ownership reduced (but he’ll still be the top Packer, as he should be). … Aaron Rodgers (12%) was the third-most popular QB on the main slate and likely will be again in FFPC2. … Aaron Jones is at only 14% ownership in the main slate, and Robert Tonyan is at under 2% — I expect both players to see a slight ownership bump as some people move off of Adams.

Buffalo gets a tough matchup and is only a 2.5-point favorite. … Josh Allen was by far the most popular QB on the main slate (38%), but his ownership may be lower in this round because of the tough Divisional Round matchup. … Stefon Diggs was the second-most popular WR (57%) and will be again for FFPC2, especially if some people come off Allen as I expect. … It’s really hard to sell any other Bills player as an option, but Devin Singletary is now the only back with Zack Moss injured, and Cole Beasley has had some spike games this season if you want to get really contrarian.

The Saints are favored by 3 at home against the Bucs. … Drew Brees was only 2% owned in the main slate, and will likely be the sixth most-owned QB in FFPC2. … Alvin Kamara (74%) was the highest-owned player of the entire main slate tournament, but I expect his ownership to be a bit lower in FFPC2 now that people will feel like they really have to make a choice between Kamara and Michael Thomas (19% in the main slate), as Thomas looked like his usual self with a 5-73-1 line in the Wild Card round. … Jared Cook (1%) is one of the better TE options outside of the Kelce/Mark Andrews chalk.

Lamar Jackson (16%) was the fourth-highest-owned QB on the main slate, but I expect his ownership to spike some in a likely shootout against Buffalo. … A lot of people will be choosing between Jackson and Allen, and choosing the right one may be key to winning the whole thing. … J.K. Dobbins (28%) now has a TD in seven straight games, but he has only four total receptions in that span … Marquise Brown (7%) went off for 109 receiving yards (and 19 rushing yards) in the Wild Card round; even though it was just his first 100-yard game since Week 1, he does have six TD scores in his last eight games. … Mark Andrews (35%) had a ho-hum 4-41-0 line last week, but he was targeted in the end zone; after a floor game, and Brown’s spike week, I’d expected their ownership rates to get a lot closer to one another.

Tom Brady (10%) was the fifth-highest-owned QB on the main slate and will likely be again in FFPC2; he has been on fire for the last month, averaging nearly 400 yards per game with a 12-1 TD-INT ratio. … Ronald Jones (15%) didn’t play a snap due to a pre-game injury last week, which will take almost everyone off him; he’s the starter when healthy, but the Bucs don’t play until Sunday afternoon, over 24 hours after lineups lock, so we’d need news early on RoJo to trust him. … Leonard Fournette (under 1%) will still be low-owned but would be a popular pivot away from the Bucs passing attack if RoJo is a no go. … Pick your poison with the Bucs pass-catching options: Chris Godwin (37%) was by far the most popular, followed by Antonio Brown (18%), Mike Evans (7%) and Rob Gronkowski (6%). … Evans’ ownership will go way up, mostly at the expense of Godwin and Brown, after another 100-yard game in the Wild Card round. … All three WRs seem primed to fill up the stat sheet.

Nick Chubb (32%) may see ownership above 50% after yet another big game and against the Chiefs weak run D (11th-most fantasy points allowed to RBs during the season). … Kareem Hunt (2%) reminded everyone how good he can be in the red zone, and his ownership is going to be significantly higher in FFPC2. … Jarvis Landry (6%) will also see an ownership bump with the Browns likely playing catchup most of the game. … Austin Hooper (1%) is a perfectly acceptable leverage play against the Chiefs, who allowed the eighth-most FPs to opposing TEs on the year.

Cam Akers (10%) was the ultimate leverage play of the main slate FFPC, but he’s going to be significantly more popular in FFPC2 against the Packers, whose allowed the fifth-most fantasy points to RBs on the year. … Cooper Kupp (5%) is expected to play in the Divisional Round, but as of Tuesday he still hasn’t practiced due to injury, so it’s a situation to monitor; his absence would make Robert Woods (10%) uber chalky at WR, as the Rams are expected to be playing from behind against the Packers.