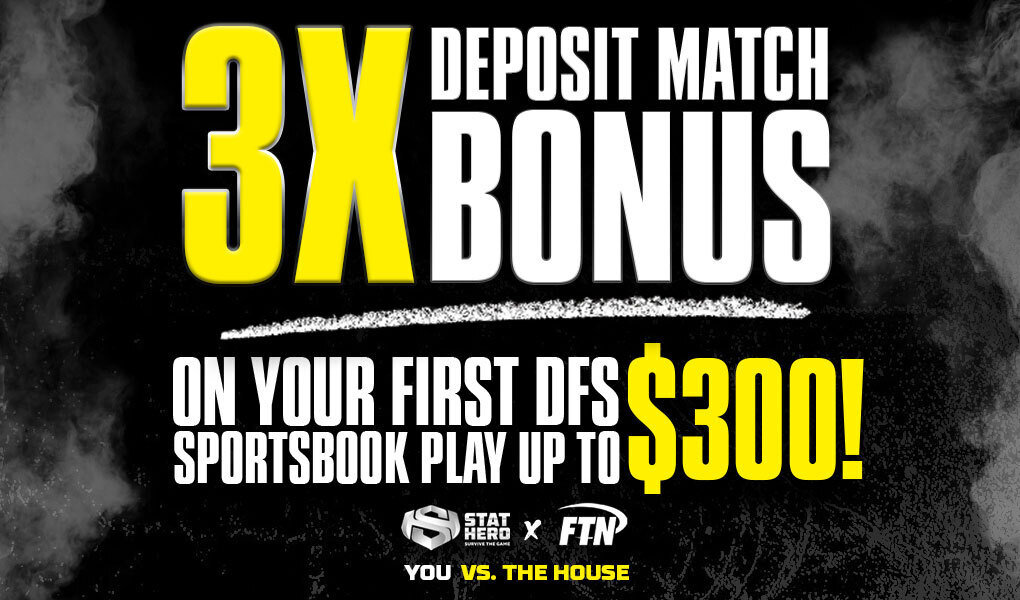 When it comes to making money in the DFS industry, there’s no such thing as too many outlets. So, when a new opportunity arises, we want to take advantage of it. That’s exactly what we’ve been presented with lately with the newest partner of FTN, StatHero.

StatHero is a healthy mix of DFS and the idea of a sportsbook in the sense that you are building a lineup with a salary cap, similar to the traditional DFS structure, but instead of competing against thousands of other entries, you’re competing against the “book”. The book, in this case, is a pre-generated lineup that you need to beat. To get all of the ins and outs of StatHero and what they have to offer, check out Tyler Loechner’s app review right here on FTN and Chris Meaney’s video breakdown.

Is it your first time playing StatHero? Sign up and deposit using the promo code FTN to get a 3x match on your first sportsbook play!

Here is a look at my favorite plays on StatHero for Thursday’s slate.

StatHero went with the strategy of stacking the Astros on this slate with Alex Bregman as their MVP of choice. While I don’t mind the Houston stack against Eduardo Rodríguez, I actually prefer to use them as a secondary stack and target the Dodgers against Mitch Keller as my primary stack. Because of this, my top MVP choice is Cody Bellinger, as Keller has already surrendered 27 hits in 20.1 innings to lefties with 14 of them going for extra bases with a 0.402 wOBA.

If you want to look elsewhere on the Dodgers, you can look to Mookie Betts or Justin Turner on the other side of the plate, as Keller has also allowed a 0.340 wOBA to righties. Because the Astros are my secondary stack, you can also take StatHero’s lead and stack the Astros and simply change up your MVP, going with Jose Altuve over Bregman.

I want to continue the theme of stacking Dodgers here and assuming we have Bellinger in our MVP spot, I’ll look to cheaper exposure to round the stack out with Max Muncy, Justin Turner and Gavin Lux being my preferred options. If looking to stack the Astros but from a different angle than StatHero did, you could target players from the other side of the plate, as players like Yordan Alvarez and Kyle Tucker make the most sense.

If looking for options to use as one-offs around the Dodgers and Astros, targeting players from the Yankees with the platoon advantage against J.A. Happ is my strategy of choice. This would thrust Aaron Judge and Giancarlo Stanton atop the list, though Stanton’s price is extremely restrictive for the rest of your lineup.

You could also opt for cheaper Yankees’ exposure with Gleyber Torres or Brett Gardner (if he cracks the lineup). While BvP is far from the most trustworthy stat to use, Gardner has his 0.294 with a 0.399 wOBA in 36 career plate appearances against Happ, notching five of his 10 hits for extra bases.

I don’t feel great about writing them up in the flex picks section given how good Mike Minor can be, but I also think there’s some merit to getting sneaky with some righties from the Oakland Athletics’ lineup on this slate. Chad Pinder, Matt Chapman and Stephen Piscotty have all made a career out of brutalizing left-handed pitchers and while Minor is still posting rather serviceable numbers, he’s been prone to the home run ball, averaging at least 1.30 HR/9 in four consecutive seasons.