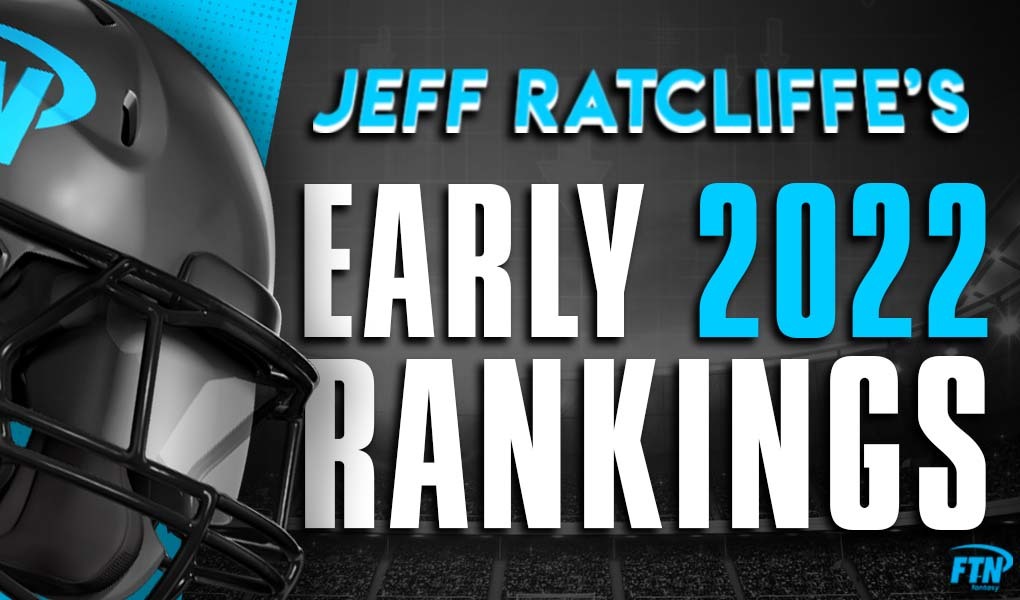 It’s never way too early to talk about 2022 fantasy football rankings. Sure, the 2021 season isn’t even over yet, but we’re really only a little over a month away from 2022 best-ball contests opening up. The combine will follow just a few weeks later. Then there’s free agency which spills into the draft. Minicamps and OTAs follow shortly after. Before we know it, the 4th of July is here and we’re right back into fantasy football draft mode.

So yeah, if we don’t start now, we’re going to get behind pretty quickly. Let’s get the 2022 fantasy football season right with an initial set of rankings. Of course, this is only the first incarnation of 2022 fantasy football rankings. With so much yet to unfold across the NFL landscape, this list will undergo many changes over the next several months. You can find the overall list below, but first I have a few thoughts on each position.

Before we get to the top 300,  here are a few thoughts on each position looking ahead to the 2022 fantasy football season.

Cheat code quarterbacks who add value with their legs continue to be the rule and not the exception for fantasy purposes. Only three of the top-15 fantasy quarterbacks in 2021 had fewer than 100 rushing yards: Tom Brady, Aaron Rodgers and Matthew Stafford. In a lot of ways, the changing of the guard has cemented at the position. Brady is still hanging on, and so is Rodgers, but that generation of quarterback is phasing out. Josh Allen, Patrick Mahomes, Kyler Murray, Justin Herbert, Joe Burrow and others will continue to redefine the position over the next decade plus. They’ll be the hot names at the position in 2022, but we’ll need to see what the future holds for Deshaun Watson and his legal matters. Likewise, could a change of scenery revitalize Russell Wilson’s outlook?

If we learned anything from 2021, it’s that running backs get hurt. This isn’t a grand revelation, but injuries shaped the fantasy landscape at the position. Christian McCaffrey and Derrick Henry headline the list, but lesser injuries to the likes of Dalvin Cook, D'Andre Swift and others made things difficult. At the same time, injuries create opportunities. Players like Elijah Mitchell and Rashaad Penny came up big when called on. These guys and so many others show the viability of coming out of a fantasy football draft light at running back. Sure, it’s uncomfortable at the time, but you’re much more likely to score a top-25 option on waivers throughout the season than you are to do the same at wide receiver.

Following a year for the ages, Cooper Kupp has now become the gold standard at wideout. But we’re also seeing a major youth movement at the position. Ja’Marr Chase is coming off the best rookie season in NFL history and displayed an enormous ceiling in 2021. His former college teammate Justin Jefferson proved that 2020 wasn’t a fluke. Deebo Samuel emerged as one of the league’s most electric offensive weapons. And the list goes on with players like A.J. Brown, CeeDee Lamb, DK Metcalf, Jaylen Waddle and more. As the NFL continues to be more pass-centric, it’s going to be crucial to build fantasy football rosters that are loaded up with elite talent at wide receiver.

This is such a tricky position where perception often doesn’t meet reality. Take Kyle Pitts for example. The Falcons tight end is coming off a rookie season that was regarded by some fantasy managers as a bust. Pitts was widely selected as the No. 4 or No. 5 tight end in drafts and he’ll finish the year as the No. 5 fantasy tight end. Of course, he did so with just one touchdown. Touchdowns are fickle. They can be here one year and gone the next. But volume is much more sticky year over year. When evaluating tight ends, follow the volume. But perhaps the bigger question is whether we need to draft a tight end early in 2022. That strategy really didn’t work in 2021, as it wasn’t Travis Kelce, George Kittle, or Darren Waller who propelled teams down the stretch. That distinction goes to Mark Andrews, who was available as late as the fifth round in drafts last year. That will not happen in 2022, as Andrews is a candidate to be the No. 1 tight end off the board

Take a look at our fantasy football offerings at FTNFantasy.

For the NFL playoffs, Jeff provides a look at postseason fantasy football rankings. Want more Jeff Ratcliffe content? These are just some of what is offered at FTNFantasy for the NFL season.