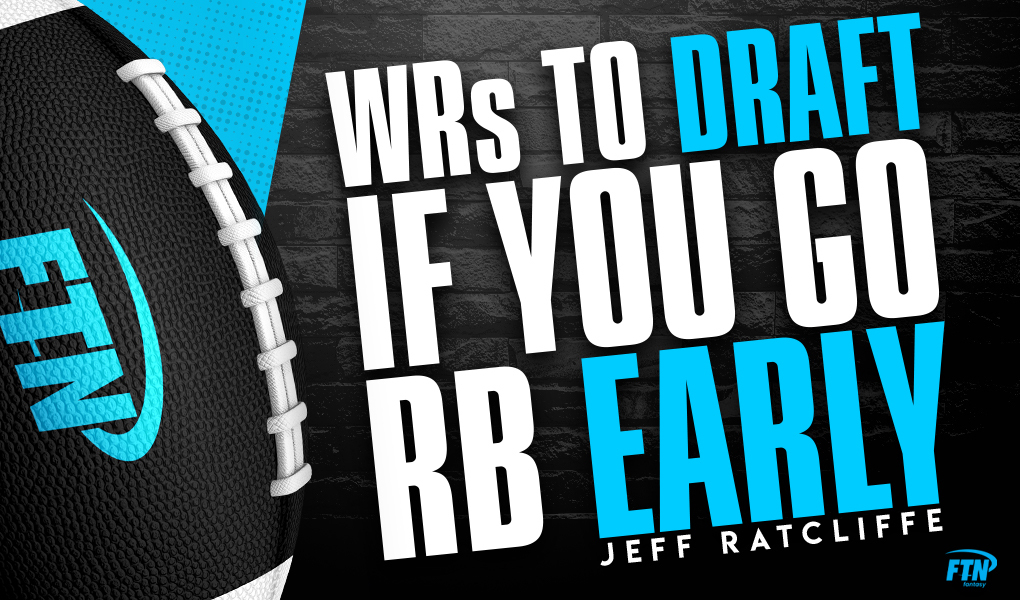 WRs to draft if you go RB early - Fantasy Football 2021

FTN's Jeff Ratcliffe picks out some mid-to-late options at wide receiver for fantasy drafters who go running back early in drafts.

The best fantasy football draft strategy is a flexible approach. Going into a draft with just one strategy in mind isn’t going to provide you with long-term success. In the early rounds, you really need to take what the board is giving you.

Sometimes, that will mean a balanced roster in the early rounds where you end up with two running backs and two wideouts. Other times you may be slanted more toward one position or the other.

If you end up going running back heavy over the first few rounds, you’ll need to have a plan of attack in place for wide receivers to start targeting in the fifth round and beyond. The good news is that I put together that list based on current ADP data. Below you will find 23 wide receivers to target if you go RB-early in 2020 fantasy football drafts. While I included their current ADP, don’t take that information as a recommendation for where you should draft them. Be sure to use a set of tiers, or better yet, my fantasy football draft board so that you can see their value during your actual drafts.

Diontae Johnson is the top target in Pittsburgh

Sure, he had a drops issue last season, but who cares? Diontae Johnson also emerged as the clear top target for Ben Roethlisberger and is position to see a heavy workload in 2021.

Brandon Aiyuk could see 100-plus targets

George Kittle is the top target in the 49ers offense, but Brandon Aiyuk is very capable of hitting triple-digit targets. His explosive ability after the catch gives him major big play juice, and he only stands to benefit from when Trey Lance inevitably takes over as the starter. While Aiyuk is a dealing with a hamstring injury, he figures to be back on the field when the season starts. Take any discount you can get on him.

D.J. Moore is waiting to be unlocked in fantasy

He’s finished top-10 among wideouts in receiving yards in each of the last two years and now has a quarterback who is capable of throwing the ball more than 10 yards in the air. Sure, Sam Darnold is far from a sure thing, but D.J. Moore’s ceiling/floor combination is very appealing.

Tee Higgins is the first receiver you want in Cincinnati

There’s a lot of uncertainly in Cincinnati with the addition of Ja'Marr Chase, but the rookie’s camp struggles have moved Tee Higgins just ahead in terms of fantasy priority. We saw plenty of upside out of Higgins last season, and that should continue even with Chase in the mix.

Jerry Jeudy could be the top receiver in Denver

With Courtland Sutton slow to come back from an ACL tear, Jerry Jeudy has been very impressive in Broncos camp. Teddy Bridgewater isn’t exactly an upside quarterback, but he did help propel three Panthers wideouts to top-36 fantasy seasons last year.

Don’t be surprised by a bounceback from Odell Beckham

Don’t base your Odell Beckham take on what we’ve seen out of him so far in Cleveland. He had a lost season, like the rest of the Browns, under Freddie Kitchens. And then he got hurt right before the Browns started to gel last season. Beckham still has upside and figures to remain Baker Mayfield’s top target.

Were it not for a camp injury to his hamstring, Golladay would likely be going roughly a round ahead of this price. Take the discount. Sure, injuries are concerning at this time of year, but Kenny Golladay will easily outplay this ADP when he’s healthy.

DeVonta Smith is a candidate for an electric rookie season

He’s coming off a massive season at Alabama last year and is positioned to be the Eagles No. 1 receiver right out of the gate. While some might knock him for his slight frame, DeVonta Smith is a dog who is going to eat in Philly this year.

Courtland Sutton’s comeback could be a big one

We have some questions as to whether Courtland Sutton would be back on the field for the start of the season, but Sutton answered those in the Broncos’ preseason finale. He looks fully recovered from the ACL injury and is setup for a bounce back campaign.

Corey Davis and Zach Wilson make for an intriguing pairing

His ADP: has been on the rise following an impressive showing so far this season. Corey Davis has very little competition for targets in the Jets’ offense, and the early reviews for Zach Wilson have been extremely favorable.

Laviska Shenault should be used in a variety of ways

While Marvin Jones has drawn a lot of attention in the preseason, we shouldn’t overlook Laviska Shenault. The Jags will manufacture touches for Shenault, who figures to be very active in the short and intermediate areas of the field.

Marquez Callaway is suddenly the No. 1 receiver in New Orleans

One of the biggest risers of the preseason, Marquez Callaway will open the season as Jameis Winston’s top target in New Orleans and will remain there until Michael Thomas comes off the reserve/PUP list. Callaway has big play ability and should see heavy volume early in the season.

Brandin Cooks is easily the top target in Houston

Houston does not figure to be very good on the offensive side of the ball, but Brandin Cooks is still worth targeting in the middle rounds. He’s essentially the only receiving target and figures to see heavy volume this season and you can get him for next to nothing

If you miss out on one of the earlier pieces to the Cowboys’ offense, Michael Gallup is a fine consolation prize in the middle rounds. Sure, he’s decidedly the No. 3 target, but there are more than enough balls to go around in this high-powered offense.