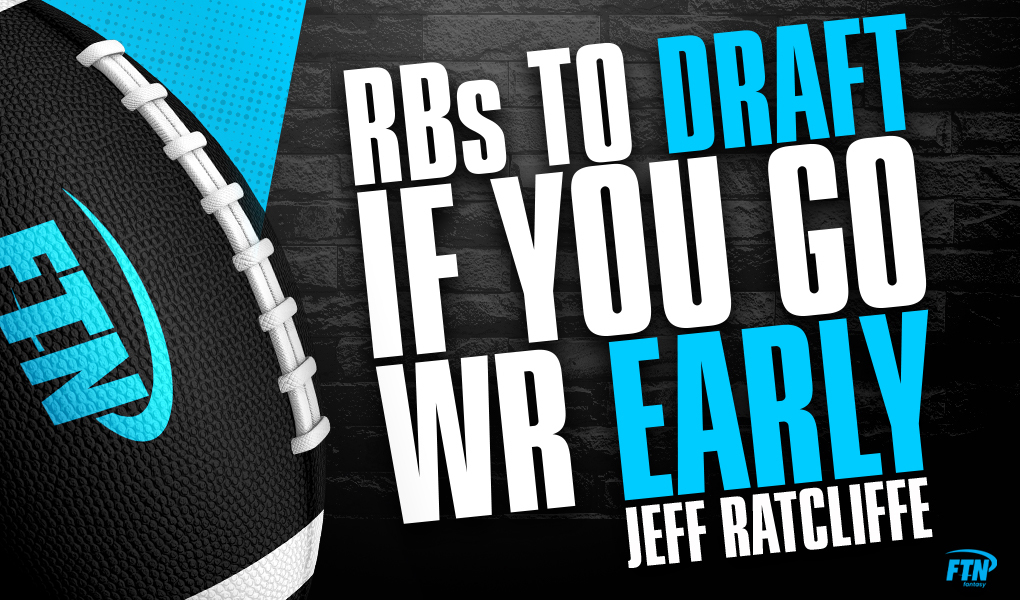 RBs to draft if you go WR early - Fantasy Football 2021

FTN's Jeff Ratcliffe picks out some mid-to-late options at running back for fantasy drafters who go wide receiver early in drafts.

The best fantasy football draft strategy is a flexible approach. Going into a draft with just one strategy in mind isn’t going to provide you with long-term success. In the early rounds, you really need to take what the board is giving you.

Sometimes, that will mean a balanced roster in the early rounds where you end up with two running backs and two wideouts. Other times you may be slanted more toward one position or the other.

If you end up going wide receiver heavy over the first four or five rounds, you’ll need to have a plan of attack in place for running backs to start targeting in the fifth round and beyond. The good news is that I put together that list based on current ADP data.

Below you’ll find nine running backs to target if you go WR-early in 2020 fantasy football drafts. While I included their current ADP, don’t take that information as a recommendation for where you should draft them. Be sure to use a set of tiers, or better yet, my fantasy football draft board so that you can see their value during your actual drafts.

Damien Harris is a beneficiary of the Sony Michel trade

Damien Harris’ ADP has been steadily on the rise since Sony Michel was traded to the Rams, but for good reason. He’s the clear lead back in New England’s run-heavy offense. James White will remain in the passing-down role, but Harris figures to see a heavy workload on the ground.

Javonte Williams could have the lead role in Denver quickly

Sure, Javonte Williams may not start the season out as the lead back in Denver, but you don’t draft a running back in the early second-round in today’s NFL unless you plan to use him immediately. The North Carolina product is a three-down back with the chops to produce RB2-plus fantasy numbers right out of the gate.

Trey Sermon should shine in the San Francisco backfield

It’s all about the rookies in this range of the draft. Trey Sermon figures to open the season in a committee situation with Raheem Mostert, but he’ll be in the mix right away. While widely labeled as an early-down back, Sermon has three-down ability. His underrated skillset fits perfectly in Kyle Shanahan’s scheme, which has also been extremely kid to running backs over the years.

Yes, the market has cooled on Michael Carter with the Jets looking likely to open the season with a three-man backfield. However, the cream rises in the NFL, and Carter is the most talented back on this roster. If you draft him, be patient, but Carter has the chance to pay dividends as a rookie who comes on over the second half of the season.

A.J. Dillon has value even with Aaron Jones around

You don’t need Aaron Jones to consider drafting A.J. Dillon. The second-year man figures to at least have some independent value in the Packers’ backfield. He also comes with significant implied value if Jones was to go down with an injury.

Here’s the other backfield you need to make a decision on, with both Zack Moss and Devin Singletary in the mix. Unlike the undersized Singletary, Moss profiles much better for lead duties. Of course, he was dinged up in the preseason, so he’s far from a lock. However, taking a shot on the more likely lead back option in a high-powered offense is exactly what we want to do in this range of drafts.

You really need to make a decision in the Tampa backfield. Many have placed their fantasy chips on Ronald Jones, but we can’t forget Playoff Lenny. The Bucs fed Leonard Fournette 20.5 touches per game in their magical Super Bowl run. Sure, Jones and Giovani Bernard will be involved, but you’re paying a minimal price for a guy who could emerge as the lead back in one of the league’s most potent offenses.

Tony Pollard should continue to impress in Dallas

Likewise, we can consider Tony Pollard even without Ezekiel Elliott. Pollard has the opportunity to lead the Dallas backfield in Week 15 last season and posted the top fantasy line among running backs for the week. So the massive upside is there as a handcuff. He should also have at least some independent value.

Sony Michel could take over the No. 1 job in Los Angeles

While many fantasy players still believe Darrell Henderson will be the lead back, there’s a very real chance Sony Michel was brought in to carry the load on early downs. No, I don’t mean he’s a 300-carry workhorse, but he certainly could lead the team in carries. And right now, you’re paying significantly less for him than Henderson. The chance to get a lead back in a potent offense is worth the shot at this point in a draft.