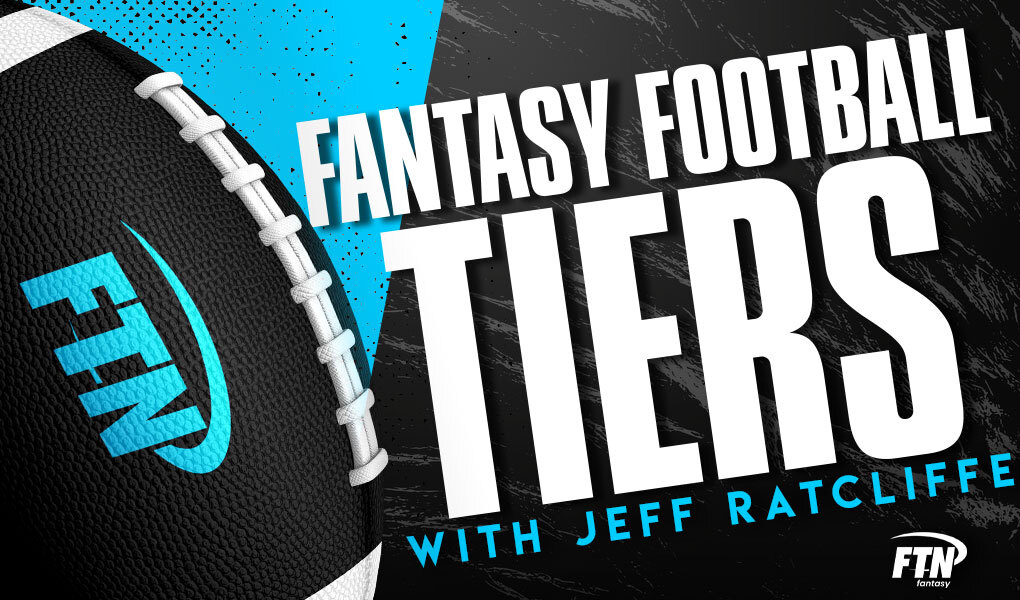 Running back fantasy football tiers are an important weapon in your arsenal. Instead of the rigid approach of fantasy football rankings, tiers allow you more flexibility on draft day, which is key to dominating your opponents. With a tier-based approach, you can see how each player stacks up at his respective position.

To help you out on this front, I broke down my 2021 running back fantasy football tiers. You can use these as they are or move them around to create your own set of tiers. Of course, don’t forget that you can check out all of our fantasy football rankings and fantasy football projections.

Get access to Jeff Ratcliffe’s personal draft board in our 2021 Fantasy Football Draft Kit! Check out the other tiers: QB | WR | TE

Here is a look at the tiers for each set of RB rankings for the 2021 fantasy football season, updated August 24th, 2021.

Some years we don’t have a consensus at the top, but this isn’t one of them. It’s essentially McCaffrey, then Cook, and then everyone else in 2021. Sure, last year wasn’t fun if you drafted McCaffrey first overall, but injuries happen. You know what else happened? He averaged a jaw-dropping 30 PPR points per game in his three games last season. McCaffrey is still elite and so is Cook, who has emerged as the league’s premier red zone back with an NFL-leading 47 goal line carries over the last two seasons.

The real debate this year might be who comes in the No. 3 spot this year. Kamara was the No. 1 option last season, thanks in part to his Al Bundy-esque performance in Week 16, but questions do loom in New Orleans with Drew Brees out of the mix. Henry accomplished the rare feat of topping 2,000 yards last year, but he offers very little in the passing game. That isn’t an issue for Elliott, who will be involved in the passing game. While he did look a bit slower last season, let’s not forget that he was second in fantasy scoring over the first month before Dak Prescott’s injury.

There are still some very interesting names at the position if you don’t end up with a top-five pick this year. Jones may not quite be the workhorse that some of this year’s top names are, but he had beem one of the most productive backs in the league over the last two seasons, especially from a touchdown standpoint. Both Taylor and Barkley enter the season with question marks. Carson Wentz’s status clouds Taylor’s outlook, though it looks like Wentz will be back sooner rather than later. As for Barkley, the Giants have been coy about when they’re going to take the training wheels off. He’s worth strong consideration at his current discounted price. Chubb is fantastic and would likely be higher if he wasn’t splitting the load with Kareem Hunt.

The third tier really needed to be subdivided, as this group isn’t quite the same as the Tier 3a backs. Here we have high-ceiling options who all come with some question marks. Drafting any one of these guys as your top back could end up being a league-winning move, but this group also has the highest bust potential of this year’s top options.

Gibson was a touchdown machine in 2020, and there’s a lot of chatter that he could assume more of a three-down role this season. Ekeler missed significant time last season and hasn’t proved to be able to handle a feature workload. Harris enters the NFL with a high pedigree and should touch the ball a ton. But question do linger about the state of the Steelers offensive line.

There’s a bit of a running back dead zone after you get out of the second round of 2021 drafts, but these three backs are appealing enough to target after the top-15 backs are off the board. Mixon missed a good chunk of last year, though he will have the chance to be a true three-down option with Giovani Bernard out of the mix. Edwards-Helaire was a mid-first-round pick in 2020 fantasy drafts and failed to deliver on the hype. But he’s an excellent post-hype candidate in the potent Chiefs’ offense.

Word out of Detroit suggests Swift could be stuck in a committee with Jamaal Williams. That’s obviously far from optimal, though Swift can still be an effective fantasy option as the primary pass-catching back. Robinson now slides into this tier following the news that Travis Etienne is likely to miss most, if not all, of the season with a foot injury. As for Harris, the Patriots back becomes very interesting with Sony Michel now in Los Angeles.

Perception is key in fantasy football, and right now the overall view of this bunch isn’t especially great among the drafting public. The alternative name for this group is the “I have to take a shower after drafting him” tier. But sexy doesn’t win fantasy championships and there’s good value to be had with these players in the third and fourth rounds.

Carson being widely overlooked but should see another heavy workload in Seattle. Likewise, Jacobs doesn’t appear likely to have much of a role in the passing game with Kenyan Drake in the mix, but he’s a threat for 270-plus carries. As for Montgomery, don’t read too much into his 2020 stretch run. Yes, he put up big-time points, but he also faced four of the league’s six worst defenses of his final six games. Sanders looks like he’s going to lose some of his passing down work, but should still be the primary ball carrier in Philly.

Rounds 5-7 are the wheelhouse for rookie running backs this year. They may not all get there in your drafts, but it isn’t a bad idea to get your hand on one of these guys in that range. Williams may not need much time at all to blow past Melvin Gordon in Denver, especially with Gordon dealing with a groin injury in camp.

As for Sermon, the third-rounder is in an optimal spot in the extremely run-heavy 49ers offense with only the injury-prone Raheem Mostert ahead of him. Carter also has a prime opportunity to make an instant impact on an extremely thin Jets depth chart.

If you end up punting your second running back, these two will be on the board in the same range as the upside RB2 options above. I’d opt for those guys over this duo. Edwards moves up the board in the wake of J.K. Dobbins’ season-ending injury, but a committee will remain in place in the Baltimore backfield. Hunt unfortunately plays second-fiddle in the Browns backfield, though he does come with uber-premium handcuff value. As for Davis, he was serviceable as Christian McCaffrey’s understudy last year and will have no competition for touches in Atlanta. That said, he also averages under 4.0 yards per carry for his career and is about as lackluster as they come.

Committees are no longer “dreaded” in fantasy football, but all of these guys are in committee situations that put their respective fantasy values in question. Edmonds will share the workload with James Conner. As I just mentioned, Gordon and Mostert all have tenuous holds on lead duties heading into the season. Henderson now looks to be on the wrong side of the committee in the Rams backfield following the Sony Michel trade. With that being said, it’s very risky to target either Rams back in upcoming fantasy drafts as we have little clarity on how the touches will be distributed. Jones and Fournette will likely be a weekly headache in Tampa. And Drake figures to be the primary passing down option for the Raiders with Josh Jacobs handling a bulk of the carries.

Handcuffing in today’s fantasy football really isn’t a viable draft strategy with the exception of a few very rare instances – like when a player is threatening to hold out for an entire year. In most instances, you’ll draft a handcuff only to cut that player in Week 3 or 4. However, this group of ‘cuffs have independent value in addition to their status as handcuffs.

Dillon now slides into the handcuff spot in Green Bay with Jamaal Williams out of the mix. Pollard is the top option on the board after we saw him finish as fantasy’s No. 1 running back with Ezekiel Elliott out in Week 15 last season. As for Penny, it looks like he’ll finally be fully healthy to start the season and would see a massive workload if Chris Carson went down. Like Murray, Mattison is now becoming a fixture in this tier.

These guys do most of their damage in the passing game. While they certainly get a nice boost in PPR scoring, keep in mind that their limited volume makes all three much more volatile fantasy options.

Yikes. This tier is volatile. There are backs on the wrong side of committees in Conner and Williams. Johnson now looks like he’ll be the passing down back in Houston with Lindsay handling early downs. Neither offers much appeal in what looks like the league’s worst offense on paper. And we have the absolute worst running back committee in all of fantasy football in Moss and Singletary. In the 13 games these two played together last season, Singletary ranked as the No. 34 fantasy running back and Moss came in 40th. In other words, these two were essentially unusable. Brown may have been the lead back for Miami in their first preseason game, but the backfield is looking like a full-blown committee this season. Evans looked like he was positioned well heading into 2021, but a preseason knee injury could cost him time. While Hyde may be used in the Jags’ backfield with Travis Etienne out, the veteran back is a plodder who offers very little fantasy appeal.

There are also some additional handcuffs to toss into the mix in deeper leagues. In a season that could still see players testing positive for COVID-19, it’s also a good idea to keep a running tab on the handcuffs around the entire league.

These guys are going to be on the board in the late rounds, but there’s really no appeal to drafting them. The goal in the late rounds is to get as much bang for your buck as you can, and this group just doesn’t offer much in the way of upside.

While this group isn’t draftable in regular-sized leagues, we should keep an eye on them as we move into the season.