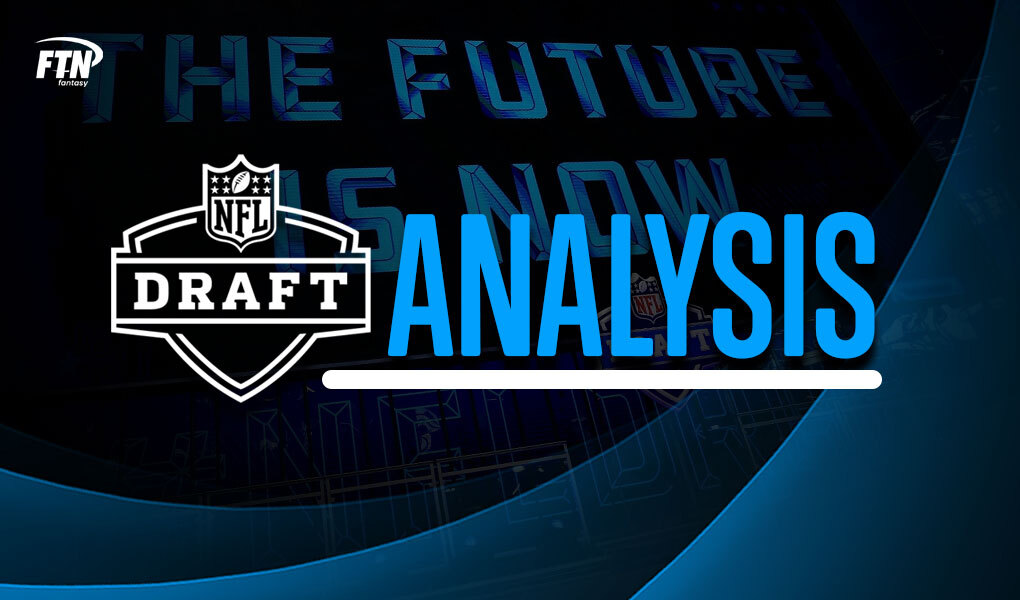 FTN's Jeff Ratcliffe breaks down each of the fantasy players taken in the first round of the NFL Draft Thursday.

This pick has been set in stone for the nearly two years. The Jags took the gimme putt and grabbed a can’t-miss prospect who figures to be the face of the franchise for years to come. Trevor Lawrence slides into an interesting spot where he’ll be the Day 1 starter with a quality surrounding cast. D.J. Chark, Marvin Jones and Laviska Shenault aren’t an elite trio, but they’re a pretty good starting spot for Lawrence to hit the ground running. He’ll be relevant in 2021 redraft leagues and remains the clear top dynasty quarterback in this year’s class.

Like Lawrence, it was essentially a foregone conclusion with the second overall pick. Zach Wilson is coming off a massive 2020 college campaign where he flashed dual-threat ability and a propensity for big-time throws. Of course, he is stepping into a rebuilding situation in New York and doesn’t exactly have the best receiving weapons. That said, he’ll be the starter from the jump and should offer QB2 potential in the short term.

Keep up with everything rookie related with the 2021 FTN Fantasy Rookie Scouting Guide.

Despite all the Mac Jones talk, the 49ers went for upside with Trey Lance. He offers elite athleticism, a high football IQ, and the ability to throw the ball all around the yard. He’s an excellent fit in the souped-up 49ers offense that features George Kittle, Deebo Samuel and Brandon Aiyuk. With Jimmy Garoppolo still on the roster, Lance may not be under center in Week 1. However, it won’t be long before he takes over. His ceiling is enormous for fantasy purposes. He’s the No. 2 dynasty quarterback in this class.

The first non-quarterback selected has the chance to be a true one-in-a-generation talent who could transform the tight end position. A position-less tight end who can create matchup nightmares for opposing defenses, Kyle Pitts has the potential to be a fantasy-relevant tight end in his rookie season. That’s extremely rare, but it’s extremely viable given the landing spot. He’ll be behind Calvin Ridley and Julio Jones in the target pecking order, but not by much. The biggest loser here is Hayden Hurst, who now becomes a complete fantasy afterthought.

Reunited and it feels so good. Ja'Marr Chase heads to Cincinnati to pair back up with Joe Burrow. Of course, that duo was a big part of arguably the greatest college football offense ever in 2019 at LSU. Chase steps into a Bengals offense that already has Tyler Boyd and Tee Higgins but has moved on from long-term No. 1 A.J. Green. Chase would figure to now be that torchbearer for Cincinnati. Boyd’s role isn’t likely to change out of the slot, but Chase’s presence really sinks Higgins’ fantasy momentum. Chase will be in the WR3 conversation 2021 redraft drafts and is the clear top dynasty wideout in this class.

As expected, the Dolphins bolstered their wide receiver corps with the addition of Jaylen Waddle. He’ll join a relatively deep group of wideouts that already includes DeVante Parker, Will Fuller and Preston Williams. Waddle will also be reunited with Tua Tagovailoa. Given the presence of Parker and Fuller, we’re likely to see plenty of Waddle in the slot in Year 1. While that role could limit his volume, Waddle’s playmaking ability is hard to overlook. He’ll be a depth option in 2021 fantasy leagues, but his long-term outlook remains bright.

Philadelphia leapfrogged the Giants to get up and selected the reigning Heisman Trophy winner, which marks the second first-round wideout in a row for the Eagles. Much has been made about DeVonta Smith’s weight, but he showed in 2020 that he is capable of special things on the football field. The Eagles’ quarterback situation is still iffy with Jalen Hurts tentatively positioned as the starter. While that uncertainty isn’t great for Smith, he should step right in and lead the Eagles wideouts in targets. That will give him flex appeal in Year 1 with a very favorable dynasty outlook.

The Bears’ social media team may have touted Andy Dalton as their QB1, but Justin Fields is set to take the job over in short order. The Ohio State product slipped outside of the top 10, but that may end up being a mistake. He offers elite athleticism and mobility to go along with a big arm. Fields may not be the Week 1 starter, but he’ll get on the field quickly in 2021 where he should riff well with Allen Robinson and Darnell Mooney. He’ll have QB2 appeal as soon as he gets the job and has the look of a long-term QB1 in dynasty leagues.

Bill Belichick didn’t even need to trade up to get his signal caller of the future. Mac Jones was widely rumored to be the pick at No. 3 overall, but ultimately fell to the range where he should have gone. While not as athletic as the other first-round signal callers this year, Jones does offer impressive accuracy and a high football IQ. He figures to open his career as Cam Newton’s backup but will likely get a crack at the starting job in 2021. He doesn’t offer a major ceiling, but he does figure to be an annual QB2 type for the long haul.

With Philly grabbing DeVonta Smith at pick 1.10, the Giants ended up trading back and still grabbing a dynamic play maker in Kadarius Toney. Labeled a gadget option by many, Toney flashed impressive chops as a route runner at the Senior Bowl. That bodes well for him getting on the field immediately, as this pick could be an indictment of Sterling Shepard. Toney might struggle to see targets with Kenny Golladay, Evan Engram and Darius Slayton also in the mix, but his big-play upside is still appealing in dynasty leagues.

The Steelers delivered the best fantasy pick of the night with Najee Harris landing in an ideal situation. A three-down back with a similar skillset to Le'Veon Bell, Harris should step right in and be the immediate bell cow in Pittsburgh. As we saw with Bell along with DeAngelo Williams and James Conner, the Steelers love to feed a three-down back. Harris is set up for a massive workload right out of the gate and is instantly knocking on the door of RB1 territory. He’s the clear-cut top option in 1QB dynasty leagues from this year’s class.

Urban Meyer followed suit with Trevor Lawrence and selected his Clemson teammate in Travis Etienne. This certainly wasn’t the optimal landing spot for Etienne, as he steps into a backfield that James Robinson owned in 2020. Meyer has come out and said Etienne will be a third-down back, but it’s hard to see a scenario where he doesn’t share the load with Robinson in the run game. His homerun hitting ability still comes with a lot of fantasy appeal, but he’s clearly behind Harris for dynasty purposes. As for Robinson, his fantasy stock is sinking faster than a cryptocurrency in the midst of a market correction.

For the fourth year in a row, the Ravens address wide receiver in the draft. Rashod Bateman joins a Baltimore wide receiver corps that features Marquise Brown and Sammy Watkins along with Devin Duvernay and Miles Boykin. Given where he was selected Bateman figures to be ahead of Duvernay and Boykin from the jump, but this is far from an optimal landing spot. Baltimore is one of the league’s most run-heavy offenses, and that isn’t likely to change as long as Lamar Jackson is under center. Bateman’s fantasy outlook isn’t especially appealing in either the short term or long term.