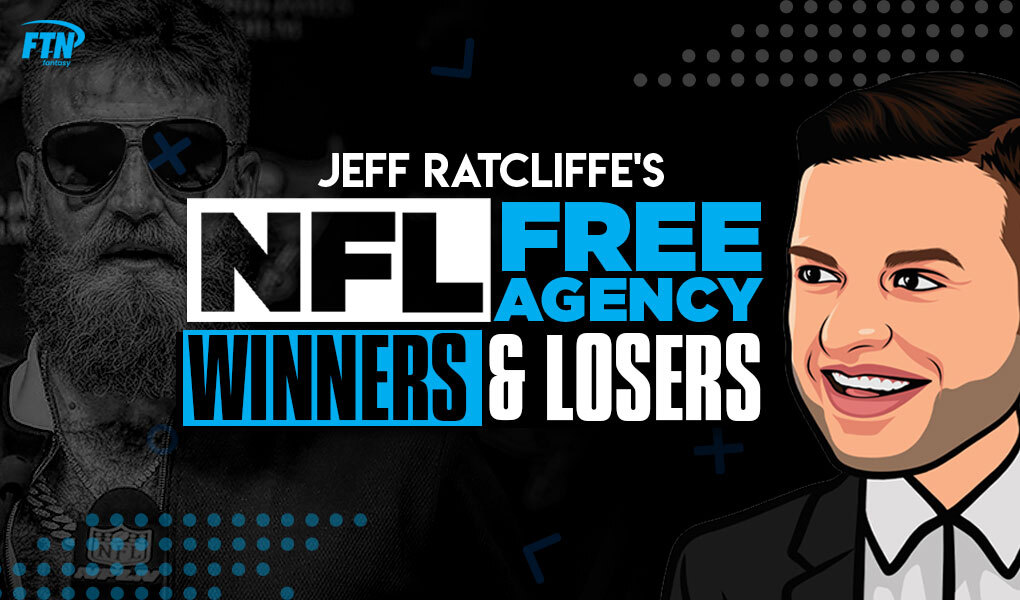 FTN's Jeff Ratcliffe identifies the moves in NFL free agency so far that have the biggest impact (both positive and negative) for fantasy football.

A look at the top fantasy winners from NFL free agency so far. (Check out our free agency tracker.)

His fantasy future hung in the balance just a week ago, but this move solidifies Jones in the borderline elite tier for at least 2021. Both he and the Packers are winners here. While A.J. Dillon dynasty owners didn’t want to see this move, Green Bay is arguably the best spot for Jones’ fantasy outlook.

Frankly, we all win here. The Football Team adds a more than competent starting quarterback in Fitzpatrick, who instantly boosts the value of Terry McLaurin and Logan Thomas. Likewise, the landing spot is more than enough to place Fitzpatrick in the upside QB2 conversation. To make matters better, adding Samuel gives him yet another weapon in the passing. As for Samuel, he flashed potential in Carolina and has an opportunity to continue along that path in Washington. He’ll be an upside middle-round target in 2021 drafts.

With one of the worst wide receiver corps in the league heading out of 2020, the Jets had to make some moves. While these aren’t massive splashes, Davis and Cole are better than what they had in house. Davis is coming off a solid 2020 campaign and is positioned well to be the No. 1 target this year. Regardless of who is under center, he’s a fantasy winner here and figures to be in the WR3 conversation. Cole doesn’t have that sort of juice here, but one would figure that his signing indicates the Jets are likely to move on from Jamison Crowder. Cole has primarily been a slot receiver over the course of his career and lined up in the slot on 68% of his snaps last season.

The general public seems to be split on whether Winston or Taysom Hill is the favorite to start in 2021. Given Hill’s performance in his four starts last season, I’m inclined to lean toward Winston. Sure, Hill went 3-1, but averaged 208.5 passing yards per game in those outings. It’s also worth considering the fact that Winston stayed in New Orleans despite getting an offer from Chicago where he likely would have started. Winston is far from an ideal NFL quarterback, but he has already proven that he has QB1 potential as a starter. He’s a big fantasy winner here.

This is a major downgrade from Hunter Henry, but Cook will retain fantasy value in a Chargers uniform. With essentially no one else on the roster to catch passes at tight end, Cook will enter the season as the clear top target at the position. He doesn’t have a high ceiling at the point in his career, but Cook should at least be a high-floor TE2 type.

Patrick Mahomes was running for his life in the postseason, so the Chiefs wisely addressed their defensive interior. While there’s still so major issues at tackle, Kansas City and, more importantly for us, Mahomes are winners here.

Kyle Shanahan gets a guy in Williams who was originally drafted by his dad and a quality veteran center in Mack. Their presence is a win for the Raheem Mostert and Jeffery Wilson in the 49ers run game.

A look at the top fantasy winners from NFL free agency so far. (Check out our free agency tracker.)

It’s easy to understand what the Patriots are trying to do here, but that doesn’t mean we have to like it. New England locked up both of the top tight ends on this year’s market, so we can expect a return to heavy 12-personnel usage. However, in the Pats’ run-heavy scheme, there aren’t as many available targets as we see is some of the league’s more pass-heavy offenses. Add to that the fact that Henry and Smith will be cannibalizing each other’s targets and we have a recipe for fantasy frustrations. Don’t get me wrong, they could end up as the top two targets on the team even with the Nelson Agholor signing, but weekly inconsistencies in terms of who gets the ball could end up being maddening in 2021 fantasy football.

This is not what you want to see if you have any piece of Josh Jacobs. Unfortunately, the Raiders have been set on bringing in a complementary piece out of the backfield in the passing game. They tried unsuccessfully last year and are going back to the well with Drake. Both Drake and Jacobs end up losers here. Drake’s chance of a full workload is almost non-existent, and a three-down role just doesn’t look like it’s in the cards for Jacobs. To be fair, he can still be an effective high volume early-down runner with top-12 fantasy potential. But there’s a very real ceiling if he doesn’t get passing down work.

Fuller’s market was perhaps cooler than expected, and he only managed to get a one-year deal. There’s no denying his explosive upside and ability to take over games. However, for fantasy purposes, he comes out as a loser. In Miami, Fuller will play with the unproven Tua Tagovailoa and have to compete with DeVante Parker for targets. While we can’t rule out Tagovailoa taking a step forward in Year 2, Fuller’s fantasy ceiling is capped in this offense.

Jacksonville is in full rebuild mode and attacked free agency with over a dozen signings. Jones is perhaps the highest profile for fantasy purposes. While getting to play with the presumptive No. 1 pick Trevor Lawrence is intriguing, there were several other better landing spots for Jones. D.J. Chark remains the top target in the offense, so it’s tough to envision Jones as much more than a WR5 type in 2021.

The champs managed to largely keep the band together for another run at the Super Bowl and are obvious winners in this year’s free agency. I already covered Chris Godwin in my franchise tag winners and losers article, but Gronk is an interesting case. Financially, he wins here, but this isn’t a win for fantasy. Tampa still has Cameron Brate along with O.J. Howard, who will be returning from injury. With so many mouths to feed, it’s going to be tough for Gronk to retain consistent fantasy value in 2021.

Sorry, Bears fans. After two weeks of excitement with Russell Wilson trade rumors, you ended up with the Red Rifle. To be fair, Dalton is better than any quarterback Allen Robinson has played with in his NFL career, but Dalton’s limitations are not a good thing for Robinson if he isn’t traded.

There was some hope among the fantasy cognoscenti that Everett would land in a spot where he’d be the clear top tight end. Well, that isn’t the case in Seattle, where Will Dissly still figures to be in the mix. Seattle also gave Everett a deal that would indicate that they don’t view him as a true alpha option. Everett is unlikely to be anything more than an inconsistent back-end TE2 option in 2021.