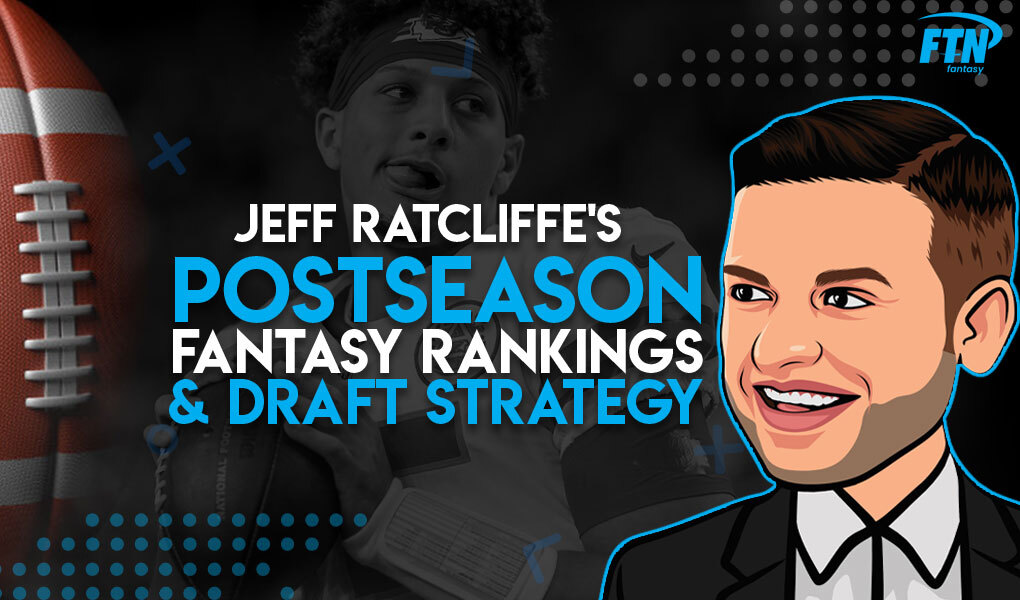 FTN's Jeff Ratcliffe breaks down his position-by-position fantasy football rankings for the Conference Championship Round of the NFL playoffs.

However, you don’t want to just blindly use the top options for one-and-done postseason contests. In those formats, you want to carefully balance the present with the future. That means we don’t necessarily want to start the highest-scoring options, but rather the highest scorers who are likely on losing teams. You could also potentially load up on one conference early with the plan to use the other conference later in the playoffs. Regardless of your approach, here’s how things shake out for fantasy football in the NFL Conference Championship Round:

We’re splitting the quarterbacks by game with Allen and Mahomes topping the list. Of course, the big question is whether Mahomes will clear the league concussion protocol in time to play this weekend. Early reports paint a favorable picture with Mahomes slated for a light practice Wednesday. Allen led the league in fantasy scoring in the regular season, but only gets a slight edge over Mahomes.

If you have all four quarterbacks left in one-and-done leagues, Rodgers and Brady are your better bet this week. Rodgers will likely be more widely played following his 48-touchdown regular season, but there’s still plenty of appeal to Brady as a contrarian option.

Running back is extremely thin in this year’s playoff semifinal round. Jones is the cream of the crop and should be an outright fade if you think Green Bay gets through. It’s also worth noting that he’s far from a bell cow option, as both Jamaal Williams and A.J. Dillon saw work last week. This three-headed committee caps Jones from a volume standpoint.

Here’s our prime group of one-and-done options. Unlike at quarterback where we can essentially fade one conference as still be just fine at the position in the Super Bowl, running back requires us to really prognosticate the outcome of both games. If you do in fact think Green Bay wins, you’ll have to choose between Fournette and Jones in the Tampa backfield. Both players topped 10 carries last week, and we’re likely to see a similar distribution here. However, Fournette’s work in the pass game makes him the better fantasy option. While the Bills abandoned the run last week, Singletary has very little competition for touches. He’s in play if you think the Chiefs get by Buffalo.

While running back is lackluster, we have a premium crop of wideouts in this year’s Conference Championship Round. Like with running backs, your optimal approach is to load up on the teams you think will lose in one-and-dones. Depending on how you see things unfold, you’ll be rostering at least one and maybe two of this trio.

The Tampa Two get their own tier. If you see Green Bay advancing, then it’s wide to double-stack Godwin and Evans with Brady this week.

It’s unlikely you’ll have to dip this far, but this is the remaining group of startable options in one-and-done contest. John Brown is coming off a solid outing in the Divisional Round and could see extra work if Gabriel Davis isn’t able to get back on the field. As for Antonio Brown, be careful. Not only is he dealing with a knee injury, but Brown also has seen his snaps reduced with the Bucs rolling out a ton of 12-personnel to protect Tom Brady.

The best tight end of his generation gets his own tier this week. Kelce is the clear elite play, but he’s also someone most will want to save for the Super Bowl. If you still have Kelce and Robert Tonyan, there is some merit to potentially using Kelce this week. In that instance you’d still have the NFC tight ends for the Super Bowl, along with Dawson Knox if the Chiefs were to lose.

Tonyan is clear the second-best option and gets his own tier. You don’t want to be stuck with Gronk and Brate or Knox this week.