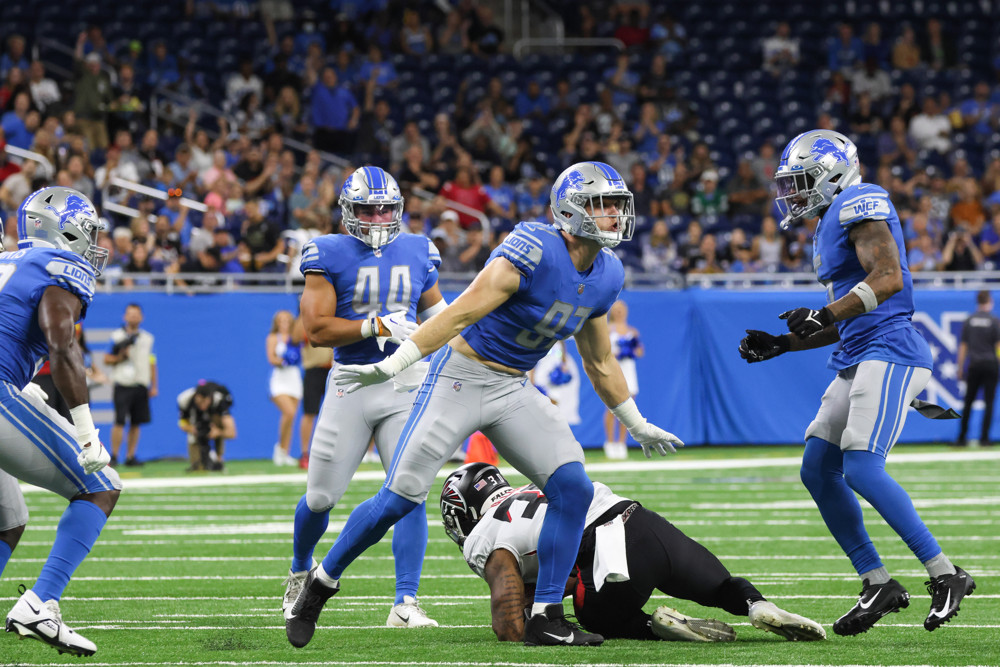 Matthew Freedman provides the second edition of his 2022 mock draft. Who will the Jaguars take first overall? Will the Lions draft a QB? Find out with the latest.

The Super Bowl is the only game that remains in the 2021-22 NFL season, which means it’s time for me to update my 2022 NFL mock draft.

Over the past three years, I’m the No. 3 mocker in the FantasyPros Accuracy Contest. Obsessing about the first round is what I do.

I haven’t made any bets yet on the 2022 draft, but when I do I’ll be sure to put them in the FTN Bet Tracker. Overall, I have a good record betting the draft.

I’m moving Hutchinson above Kayvon Thibodeaux (for now) because I think he has a higher overall draft floor. Thibodeaux conceivably could slip all the way to No. 3, but I doubt Hutchinson makes it past No. 2.

Hutchinson dominated in 2021 with 14 sacks in 14 games, and the Jaguars need to improve their defensive line.

Entering the 2021 college football season, I had Thibodeaux as the No. 1 player on my NFL draft big board, and he didn’t disappoint with seven sacks in 10 games. The Lions have a clear need on the defensive line.

The Texans don’t have an obvious need at tackle, but Laremy Tunsil has a potential out in 2023, and Marcus Cannon is a free agent after 2022. Neal could eventually replace either one of them, and in the meantime he could be an absolute mauler at guard, where the Texans are weak.

A three-year SEC starter with a five-star recruitment pedigree, Neal offers elite versatility along the offensive line, given that he started at left guard as a freshman, right tackle as a sophomore, and then left tackle as a junior.

Last year, the Jets drafted hopeful franchise quarterback Zach Wilson. This year, they draft someone to protect him. A unanimous All-American selection with tackle/guard versatility, Ekwonu is a significant upgrade to the offensive line.

Left tackle Nate Solder is headed for free agency and about to turn 34 years old. With Cross, the Giants get a first-team All-SEC left tackle to replace him.

The Panthers look like they’re somewhat stuck with Sam Darnold on his fifth-year option — but they still need a quarterback of the future, and that’s almost certainly not Darnold. I could see them adding a veteran passer via trade or free agency, but until that happens, I’ll give them a quarterback here.

Pickett isn’t quite the consensus No. 1 quarterback in the class — but he’s the only quarterback to appear in every mock draft I’ve surveyed.

Karlaftis could conceivably go as high as No. 4. He’s in the top 12 of a supermajority of mocks, and he entered the season as a top-20 prospect on my big board.

The Giants need to improve on the defensive line, and Karlaftis is a first-team All-Big Ten three-year starter who has NFL-caliber power and will be 21 years old for the entirety of his rookie season.

Rare is the mock draft that has Hamilton outside the top 10. Hamilton has a Derwin James-esque skill set in that he can play deep, at linebacker, in the slot against wide receivers and tight ends, and on the edge as a situational rusher.

The Falcons could use a defensive standout at safety, especially since starters Duron Harmon and Erik Harris are both slated for free agency.

With Corral, the Broncos get a three-year SEC starter with good accuracy (67.3% career completion rate) and mobility (4.0 career yards per carry).

The shine has recently started to come off Stingley, but he’s still a top-10 pick in the supermajority of mocks. The Jets need a cornerback, and Stingley is the consensus No. 1 player at the position.

I’m not thrilled with this pick, as it’s far from a lock Howell goes in Round 1. But right now, before the veteran quarterback dominoes have fallen, the Football Team seems likely to take a passer early in the draft given that Ryan Fitzpatrick is a free agent and Taylor Heinicke is not a starting-caliber player.

I currently have Howell ahead of Malik Willis (Liberty) on my board.

Starting cornerbacks Patrick Peterson and Mackensie Alexander are both slated for free agency. The Vikings need significant help at the position, and Gardner is a consensus All-American cover man with nine career interceptions.

The Browns desperately need a wide receiver, and Wilson is coming off a self-fulfilling 70-1,058-12 receiving campaign. Many mocks have the Browns going with the in-state prospect.

Edge rushers Justin Houston and Pernell McPhee are 33 years old and headed for free agency. The Ravens need to reload on defense, and they can do that with the addition of Ojabo, who racked up 11 sacks in 13 games last year in his first season as a starter.

Longtime center Jason Kelce is 34 years old and eligible for free agency. Linderbaum is a unanimous All-American and Rimington Trophy winner as the best center in college football. With Linderbaum, the Eagles get an elite interior lineman who can help the offense with both the pass and the run.

Fletcher Cox and Javon Hargrave are slated for free agency in 2023, and Hassan Ridgeway hits free agency this year. The Eagles can solidify the middle of their defensive line with Davis, who is a unanimous All-American and the winner of the Chuck Bednarik Award and Outland Trophy as the best defensive player and interior lineman in the nation.

The Chargers were dead last in the league in 2021 with a defensive rush success rate of 47.2%. They basically missed the playoffs because they couldn’t stop the Raiders from running the ball — even though they knew the Raiders were going to run the ball.

Lloyd is an off-ball thumper with coverage capability and an All-American pedigree. He was No. 2 in the nation in 2021 with 22 tackles for loss.

I have Leal classified as an edge rusher because I think he has the power and skill set to play as a 4-3 end in Philadelphia’s scheme, but with his versatility and size (6-foot-4, and 290 pounds) Leal ultimately might settle in as a 4-3 tackle or 3-4 defensive end.

In this scenario, he could help the Eagles replace free agents Derek Barnett and Ryan Kerrigan.

The Steelers need a quarterback for the post-Ben Roethlisberger era, and Willis has a real shot at Round 1. After transferring from Auburn, Willis completed 62.4% of his passes for 5,107 yards and 47 touchdowns to 18 interceptions in two years as the starter at Liberty and added 338-1,822-27 rushing. Willis has a tough playing style that would seemingly appeal to head coach Mike Tomlin.

Jakobi Meyers, Kendrick Bourne, Nelson Agholor and N’Keal Harry: These guys are not good enough to help quarterback Mac Jones develop fully. With his elite size (6-5, 210 pounds), age (21 years old as a rookie), and college production (88-1,084-7 receiving in eight games in 2021), London has flown up sharp mocks over the past month.

The Raiders need a replacement for former first-round receiver Henry Ruggs, and they are able to get Williams on the cheap due to the knee injury he suffered in the College Football Championship.

In his first year at Alabama after transferring from Ohio State, Williams looked like one of the best players in the nation with 79-1,572-15 receiving and 3-23-0 rushing.

The Cardinals were fragile at cornerback for most of the 2021 season anyway, and they now could lose No. 1 corner Robert Alford in free agency. Booth is a likely first-rounder with good size (6-0, 200 pounds) and pedigree (4-5 stars as a recruit).

Left guard Connor Williams is clearly the weakest starter on the Cowboys’ offensive line, and he’s headed for free agency. Green is a great upgrade. A three-year SEC starter with five-star recruitment pedigree and positional versatility, Green will be just 21 years old for the entirety of his rookie season. Although he played most of his college career at guard, Green might have the size (6-4, 325 pounds) and skill set to play professionally at tackle, where he made spot starts on both sides of the line in 2021. In a perfect world, he could be the long-term replacement to left tackle Tyron Smith a few years from now.

The Bills have no obvious needs, but No. 1 corner Tre’Davious White (knee) is coming off a serious injury, and No. 2 corner Levi Wallace is a free agent. In McCreary, the Bills get a multi-year SEC starter with inside/outside versatility.

Right tackle David Quessenberry is 31 years old, immensely replaceable, and a restricted free agent in 2022. Plus, his last name isn’t an easy one to spell.

Almost every year, there’s at least one FCS player who finds his way into the first round after a distinguished college career. This year, that could be Penning, who has elite size (6-7, 321 pounds) and was a Walter Payton Award finalist in his final season.

No. 1 cornerback Carlton Davis is a free agent, and starting corners Jamel Dean and Sean Murphy-Bunting will be free agents in 2023. A true junior with three years of starting experience, McDuffie gives the Bucs needed depth at the position.

This is an appeasement pick. Wide receivers Davante Adams and Marquez Valdes-Scantling are eligible for free agency, and Allen Lazard is a restricted free agent. In selecting Olave, the Packers give quarterback Aaron Rodgers an NFL-ready pass catcher with 163-2,505-32 receiving in 31 games over his past three seasons.

The Dolphins have maybe 10 guys who can theoretically play tackle — but not one of them is really an NFL-caliber tackle. But Raimann might be. A mountain of a man (6-7, 305 pounds), Raimann is an unconventional prospect given his age (turns 25 in September), background (foreign exchange student from Austria in high school), and football journey (transitioned from tight end to left tackle in 2020). Raimann is raw but powerful with the potential to be a blindside dominator.

We’re at the point in the first round where almost anything goes, but Dotson fits the draft range and feels like the kind of versatile offensive playmaker who would appeal to head coach Andy Reid. In his two final seasons at Penn State, Dotson was 143-2,066-20 receiving, 6-18-1 rushing, and 22-301-1 punt returning in 21 games.

Wide receivers Byron Pringle and Demarcus Robinson are free agents in 2022, and Mecole Hardman is a free agent in 2023.

Defensive tackles Larry Ogunjobi and B.J. Hill are slated for free agency, and Walker has the size (6-5, 275 pounds) to replace them in the interior and the athleticism to rotate with rushers Trey Hendrickson and Sam Hubbard on the edge.

Starting off-ball linebackers Alex Anzalone and Jalen Reeves-Maybin are both free agents, and Dean is very likely to be a first-rounder. A unanimous All-American, Dean was a multi-year starter for Georgia’s championship-winning unit, and he won the Butkus Award in high school and then college as the nation’s best linebacker.