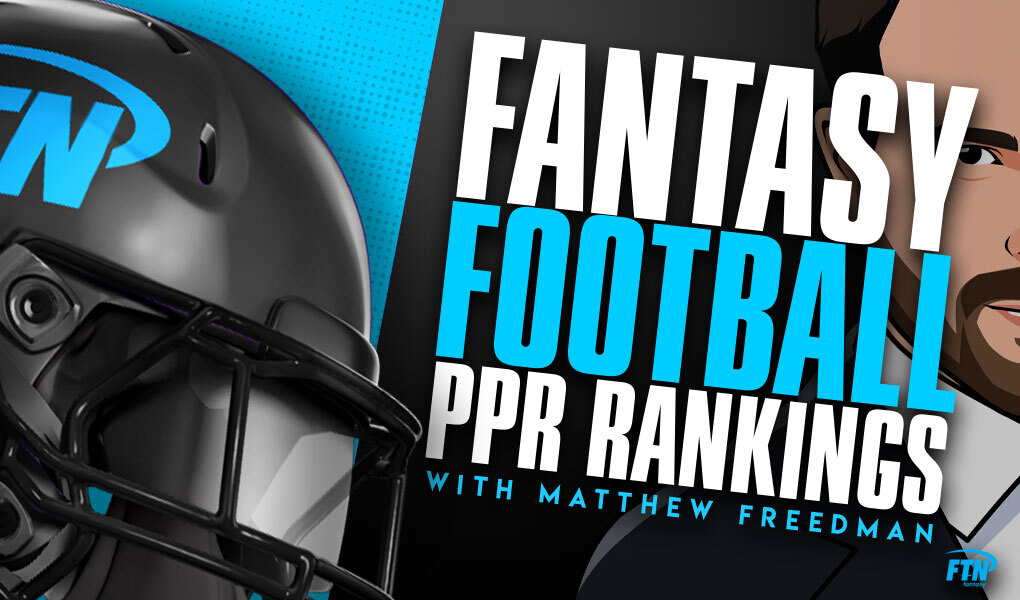 FTN's Matthew Freedman dives in on his PPR rankings for fantasy football in the 2021 NFL season and highlights places where he diverges from conventional wisdom.

A couple of weeks ago I released my 2021 dynasty fantasy rankings, and now, with the regular season approaching at a rapid pace, it’s time to publish the first draft of my position-by-position redraft rankings.

These are specifically for PPR scoring, although for most players the format doesn’t make a huge evaluative difference on an intra-positional basis.

Also, it’s 7 a.m. and I just wrote the word “intra-positional.” There’s a chance I even created the word right then and there as I typed it. That’s a good sign. Today is gonna be a banger.

A couple of items to note:

Here are my rankings at each position. For our official rankings, check out our FTN rankings page:

Here are my top-12 PPR quarterbacks.

Based on the data in our FTN ADP tool, I am relatively high on these players.

Lamar Jackson has an incredibly high Konami Code floor with back-to-back seasons of 1,000-plus yards rushing. On top of that, he has better wide receivers this year with the additions of Rashod Bateman and Sammy Watkins, and his offensive line should be better with the return of tackle Ronnie Stanley and acquisition of guard Kevin Zeitler.

Side note: I’m middling Jackson’s season-long passing yardage prop — over 3,055.5 yards at FOX Bet, under 3,475.5 yards at BetMGM. That’s a massive middle, and in our official 2021 FTN player projections we have Jackson slated for 3,378. Eliot Crist has also bet the over on Jackson’s passing prop.

To see the other bets I’ve made for the upcoming NFL season — including a side or total for every Week 1 game — check out our FTN Bet Tracker.

While many other top backs are aging out of their peak productivity windows, Jonathan Taylor is now entering his prime as a 22-year-old second-season dominator. Blessed with an incredible combination of size and speed (226 pounds, 4.39-second 40-yard dash), Taylor put up 1,247 yards rushing and 305 yards receiving in 16 games as a rookie (including playoffs). With one of the best offensive lines in football, I don’t know why he wouldn’t be just as good — and possibly better — this year.

Think of all the great receivers in the league. We are in a golden era of wide receiver play. Out of all those elite players, only one has managed to go over 1,200 scrimmage yards in each of the past two seasons — and that’s D.J. Moore. And he’s done it while catching passes from Teddy Bridgewater, Phillip Walker, Kyle Allen, Will Grier and Cam Newton. He’s entering his prime at just 24 years old, and he could have more targets and advantageous usage coming his way this year now that Curtis Samuel is gone. His upside is massive.

Over the past four years, Jared Cook has averaged 698.2 yards and six touchdowns receiving in 15.3 games per season. That’s not elite, but that easily makes him a TE1, and there’s little reason to think he can’t approximate those numbers again. He’s on the older side at 34, but for a tight end that age is not ancient, and he’s partnered with an ascending quarterback in Justin Herbert and a familiar playcaller in offensive coordinator Joe Lombardi. At his low ADP of TE25, Cook offers massive value.

Even if Aaron Rodgers returns to the Packers and plays the entire year (I believe that’s the likeliest outcome), he could still suffer regression from what was a career-best MVP campaign. Remember that in the 2018-19 seasons Rodgers averaged just 4,222 yards and 25.5 touchdowns passing per year. Add on top of that the uncertainty with his situation, and I don’t see the point in taking a risk at such a deep position.

Nick Chubb is a great runner, one of the best between-the-tackles playmakers in the league. Of all backs with 100-plus carries last year, Chubb was No. 1 with a 17.9% gash rate.

But in the words of Renly Baratheon: “Do you still believe good soldiers make good kings?” With Kareem Hunt sharing the backfield, Chubb — as efficient as he is — might struggle to earn the sheer volume of snaps, carries, targets, and goal-line opportunities he needs in order to be a high-end fantasy producer. Being talented is not the same thing as scoring fantasy points.

More of a high-volume producer than an efficient playmaker, Allen Robinson is almost 28 years old, and this season he’ll be catching passes from a nearly washed-up veteran in Andy Dalton and a promising-yet-raw rookie in Justin Fields. I feel like his risk/reward profile is skewed to the downside: If he overachieves, it won’t be by much. If he underachieves, he could massively disappoint.

Maybe I’ve overly jaded, but I think I’ve seen enough of the Mike Gesicki experiment. He hasn’t been bad the past two years, but he feels more like an athletic version of Austin Hooper than a low-grade knockoff of Travis Kelce. With the offseason additions of wide receivers Will Fuller and Jaylen Waddle, Gesicki now might be No. 4 — and maybe even No. 5 behind running back Myles Gaskin — in pass-catching priority.

For more players I like and dislike relative to the consensus, check out my 10 bold predictions for 2021.