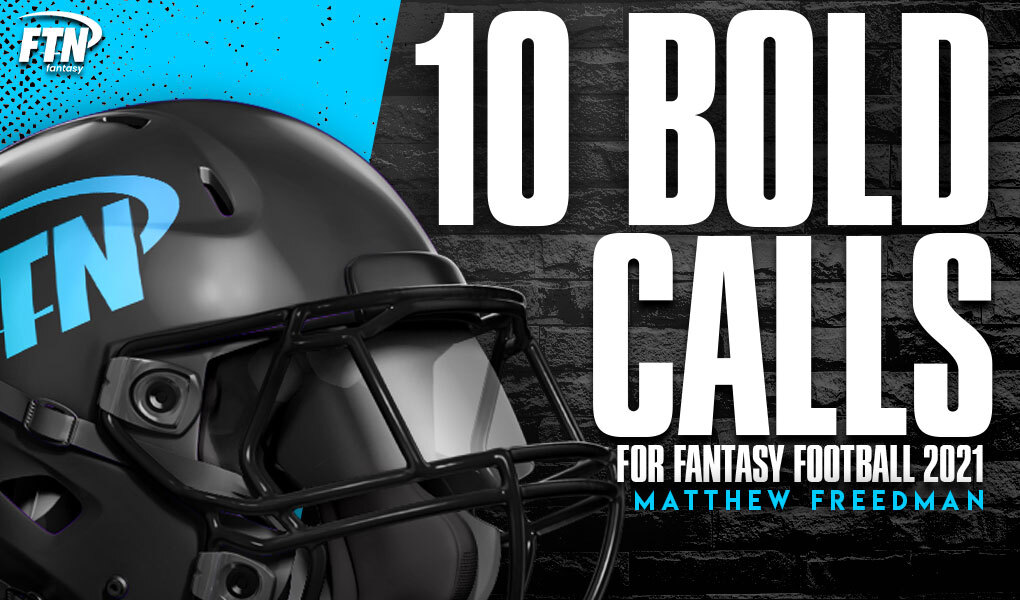 Matthew Freedman offers up 10 of his bold calls for fantasy football in the 2021 NFL season.

When it comes to playing fantasy sports, you have to make bold calls. A certain art exists to making bold calls in fantasy football: They should be realistic yet somewhat unlikely and also unorthodox but not overly inflammatory. That’s as true for 2021 as any other year.

That’s not an easy needle to thread. But I’m trying to thread it anyway.

Here are 10 bold predictions I’m making for the 2021 NFL season.

1. Russell Wilson will be the No. 1 fantasy QB

For years, fantasy football fans have begged the Seahawks to let Russell Wilson cook. Fool me once, etc., etc., but as I noted recently on the Fade the Chalk podcast, I believe that 2021 may actually be the year that Wilson finally finds the kitchen and stays there for the entire campaign.

Wide receiver DK Metcalf should enter his full studness this season as a third-year professional. With Metcalf’s ability to make plays, Wilson will have an incredibly high week-to-week ceiling.

And I expect the Seahawks to lean on the passing attack. This offseason, they replaced run-focused offensive playcaller Brian Schottenheimer with Shane Waldron, who coordinated the Rams passing game the past few years. Additionally, this offseason they gave wide receiver Tyler Lockett a four-year, $69.2 million contract extension with $37 million guaranteed and added dynamic tight end Gerald Everett via free agency.

On top of that, the Seahawks selected wide receiver D'Wayne Eskridge in Round 2 with their first pick of the 2021 draft, even though they already had Metcalf, Lockett and Everett.

Given the recent investments the Seahawks have made in the passing game, they might finally be willing to go all-in on Wilson as a high-volume passer.

Last year, he was No. 1 in the league with 59 end-zone targets and No. 6 with 948 yards passing on attempts of 20-plus yards. If Wilson throws the ball even a little more in 2021, he could annihilate expectations, especially because he has a reasonable rushing floor.

While Wilson isn’t one of Eliot Crist’s top Konami Code candidates for 2021, he has been a consistent rushing threat for years, and last season he was No. 2 at the position with a 48.7% explosive run yardage share (per our Explosive Run Rate Tool).

With his high ceiling, elevated floor, and possible passing usage, Wilson has the capacity to finish 2021 as the No. 1 fantasy quarterback, which makes him an outstanding value right now in best ball drafts.

Editors note, Akers is now out for the season with an injury. If you are curious anyway, here are Freedman's notes on Akers.

You probably don’t need me to tell you this — but I am abnormally high on Cam Akers.

On the macro level, Akers has so many factors in his favor.

Moving into his second season, Akers is poised to explode, especially considering that the Rams offense should be better this year and afford him more goal-line opportunities with quarterback Matthew Stafford.

Given the extent to which he relied on running back Todd Gurley in his league-leading 2017-18 heyday, we know that head coach Sean McVay is willing to give his lead back all he can handle.

Based on the draft capital the Rams invested in him last year and how he closed out the season, Akers could have a Gurley-esque workload — and if that happens then a No. 1 overall fantasy finish will be well within his range of outcomes.

Myles Gaskin is regularly drafted as a low-end RB2, but he has undeniable RB1 upside. He opened 2020 as a rotational player and missed six games to injury and COVID-19, but once he became the clear lead back in Week 3, Gaskin was an undeniable producer with 126-498-3 rushing and 31-326-2 receiving in his final eight games.

Gaskin is undersized: He’s currently listed at 5-foot-10 and 194 pounds. He will never be a Derrick Henry-like high-volume rusher. But he has a well-rounded three-down skill set, and with his receiving ability he can still capture a high percentage of his team’s touches: Last year starting in Week 3, Gaskin was No. 7 among all backs with a 33% share of his team’s opportunities (carries plus targets).

The Dolphins are likely to have an improved offense this year, and Gaskin’s competition on the depth chart (Malcolm Brown, Salvon Ahmed, Patrick Laird) is uninspiring. He should be the lead back once again, and if his 2021 usage looks anything like that of 2020 then he will be a fantasy RB1.

4. Amari Cooper will be a top-eight fantasy WR

People love to hate on Amari Cooper, but he has had 1,000-plus yards receiving in five of his first six NFL seasons. In NFL history, Jerry Rice, Randy Moss, Mike Evans, Odell Beckham, A.J. Green, Torry Holt, Chad Johnson, Brandon Marshall and Marques Colton are the only other receivers to accomplish that feat. That’s a pretty good list, yeah?

Last year, Cooper was WR2 in Weeks 1-5 with an average of 11.0 targets across quarterback Dak Prescott’s starts. In an offense expected to play fast and pass frequently, Cooper could have a volume-fueled high-end campaign even if second-year receiver CeeDee Lamb sees his target share increase.

5. Kenny Golladay will not be a top-36 fantasy WR

I have all the respect in the world for Kenny Golladay — but let me tell you some people I have no respect for: Giants offensive coordinator Jason Garrett and quarterback Daniel Jones. (Sorry, Stephie.) Last year, the Giants passed for a league-low 12 touchdowns. On the one hand, they should experience positive regression this year. There’s no way they can be that bad again, right? On the other hand, even if the passing offense improves it still won’t be good: It will be mediocre at best.

Last year, the Giants allowed the second-highest pressure rate in the league with a mark of 40.3% (per our Offensive Line Stats Tool) and in the 2021 draft the Giants added zero offensive linemen. They will likely struggle to sustain drives, and Jones is unlikely to have the necessary time in the pocket to throw deep, where Golladay has thrived across his career.

Finally, Golladay has underappreciated competition for targets in wide receivers Sterling Shepard and Darius Slayton, tight end Evan Engram and running back Saquon Barkley. Not once in his career has Golladay had 120 targets, and he might fail to hit that mark again in 2021.

6. Calvin Ridley will be the No. 1 fantasy WR

Any time you say that someone will be the top player at his position, that is reasonably bold — but I’ll be honest: Saying Calvin Ridley will be the No. 1 fantasy receiver in 2021 doesn’t feel that bold to me. The Falcons are now without longtime franchise playmaker Julio Jones, and in his three-year career, Ridley has averaged 11.1 targets in eight games without Jones.

This year, Ridley should have a weekly floor of eight targets, and in his 19 career games with that threshold he has averaged 22.8 PPR points on 7.0 receptions, 106.5 yards and 0.84 touchdowns receiving.

7. Robby Anderson will be a top-12 fantasy WR

This tweet doesn’t say it all, but it probably says enough.

Last year, Robby Anderson was No. 12 at the position with 13.7 expected receiving PPR points per game (per RotoViz). With another year in offensive coordinator Joe Brady’s system, Anderson could progress even more in 2021.

8. A.J. Brown and Julio Jones will both be top-12 fantasy WRs

Of all active wide receivers with multiple seasons played and 100-plus targets over the past half decade, A.J. Brown and Julio Jones are Nos. 1-2, respectively, with 10.8 and 10.1 yards per target (including postseason). Both players are extremely efficient at turning opportunities into production.

And both receivers should see plenty of opportunities in 2021. Although the Titans have historically had a run-focused offense, Brown and Jones are unlikely to want for targets, as the Titans lack an established No. 3 wide receiver and pass-catching running back and tight end. Even if the Titans don’t throw often, their target distribution should be highly concentrated on Brown and Jones.

And the quality of those targets should be high. Play-action passing opens up downfield and run-after-catch opportunities for receivers, and quarterback Ryan Tannehill was No. 2 last year with 193 play-action dropbacks and 9.68 yards per attempt on play-action passes (out of quarterbacks with 100-plus such dropbacks).

Given how they are likely to be used, both Brown and Jones could dominate in 2021.

Last year, in his lone season with the Raiders, Nelson Agholor had a career-best campaign with 48-896-8 receiving. If Agholor could do that in 2020, what’s to keep John Brown from being similarly productive in 2021?

Wide receivers Henry Ruggs and Bryan Edwards are upside players who could both break out in their second NFL seasons — but they are raw and unproven, whereas Brown is a veteran with two 1,000-yard seasons for his career and 9.1 yards per target over the past two years.

As Agholor proved to be last year, Brown is versatile enough to line up at all three receiver spots, and he should inherit Agholor’s role, which could afford him significant target volume even after tight end Darren Waller has taken his share of the market.

With an average draft position that puts Brown outside of the top 60 at his position, I’m very willing to bet on his WR3 upside at cost.

10. Dallas Goedert will be a top-four fantasy TE

This past year, Dallas Goedert was No. 1 at his position with 0.22 forced miss tackles per touch (among all tight ends with 30-plus touches).

He has massive yards-after-catch potential and could see a significant increase in target volume, given that the Eagles are expected to part with tight end Zach Ertz this season and have an incredibly unproven collection of wide receivers in DeVonta Smith, Jalen Reagor, Greg Ward, Travis Fulgham and J.J. Arcega-Whiteside.

Keep up with all our great NFL content here. 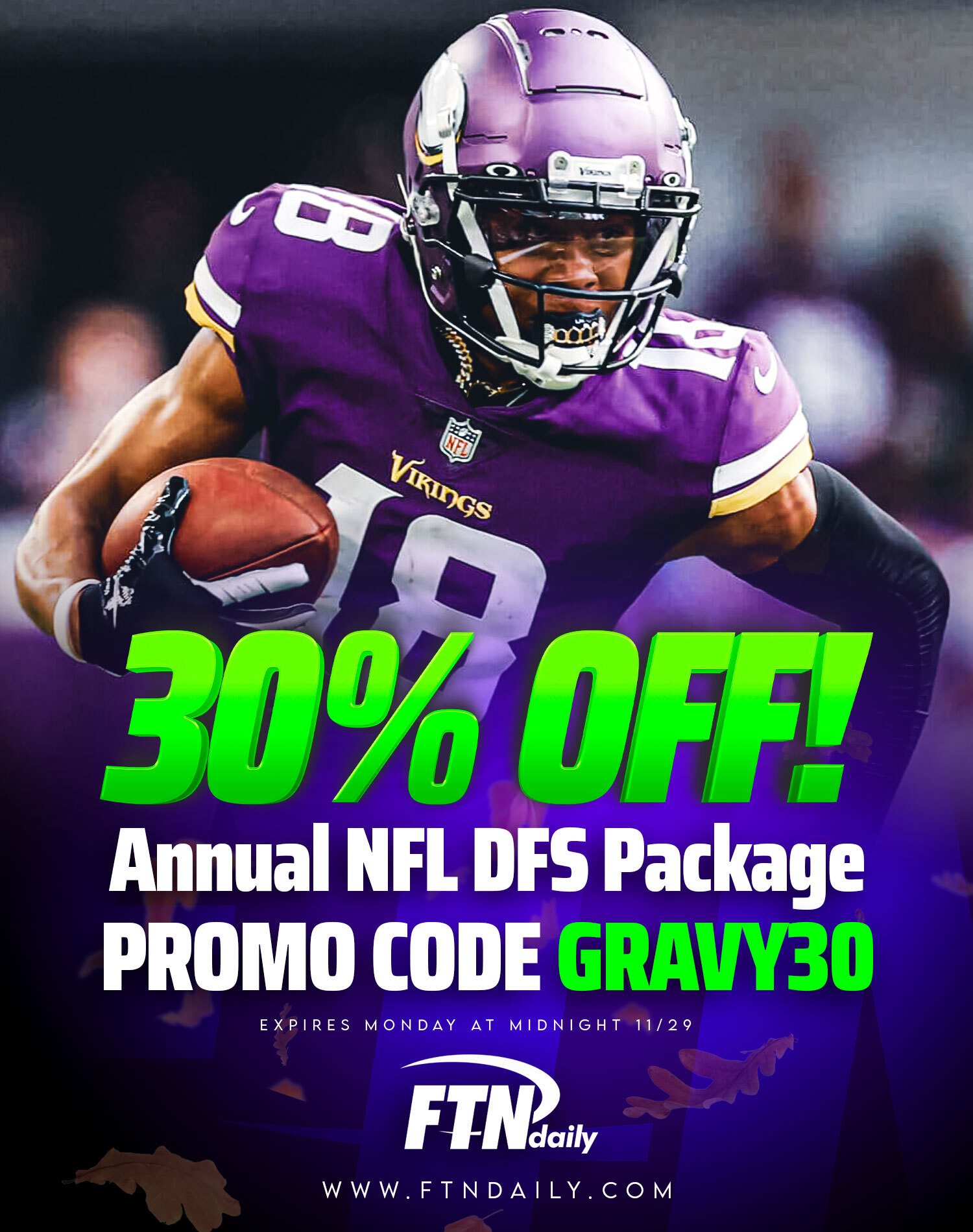