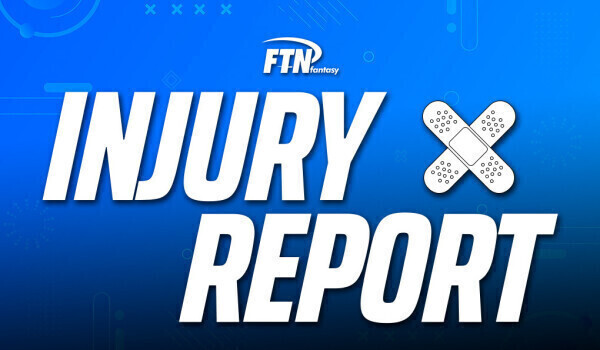 FTN's Nick Shlain covers position-by-position injuries around the NFL heading into Week 8 and how it impacts your fantasy football teams.

Every Monday during the NFL season, the Injury Report goes through the injuries around the NFL position-by-position as they relate to your season-long fantasy football teams.

Arizona Cardinals running back James Conner is out, and Darrel Williams will be a game-time decision. It appears another week of Eno Benjamin SZN could be upon us.

Carolina Panthers running back Chuba Hubbard is out, making D'Onta a must-start play.

Detroit Lions running back D'Andre Swift isn’t on the injury report and is practicing in a full capacity for the first time in weeks, while wide receiver Amon-Ra St. Brown is listed as questionable with a head injury as he remains in the concussion protocol. Lions head coach Dan Campbell said St. Brown was trending toward playing.

San Francisco 49ers wide receiver Deebo Samuel was not seen participating in practice again Friday. It’s officially time to panic if you were planning on using Samuel this weekend.

Titans quarterback Ryan Tannehill was seen in a walking boot after this week’s game. Tannehill says he’ll do everything he can to play this week, but if he can't, third-round pick Malik Willis will draw the start. Willis is a good pickup in superflex leagues this week if Tannehill doesn’t start.

Jets running back Breece Hall has suffered a torn ACL and minor meniscus injury, according to ESPN’s Adam Schefter. It’s a season-ending injury for the likely front runner for Offensive Rookie of the Year. Michael Carter stands to benefit the most from Hall’s absence, while the Jets also have Ty Johnson.

Broncos running back Mike Boone has a high ankle sprain. Boone is set to miss at least a few games. Denver brought in Marlon Mack already. Melvin Gordon, Latavius Murray and Mack will be the three Broncos running backs this week against the Jaguars in London.

Seahawks wide receiver DK Metcalf was carted to the locker room with a knee injury Sunday. X-Rays were negative, and Metcalf won’t need surgery according to head coach Pete Carroll. That’s the good news, but the bad news is there’s no clear timetable for his return as of yet. We’ll have to monitor practice reports to see if he has a chance of playing in Week 8.

Lions wide receiver Amon-Ra St. Brown left Sunday’s game with a concussion. He’ll have to clear the NFL’s concussion protocol if he’s going to suit up against Miami in Week 8.

Chargers wide receiver Mike Williams has a sprained ankle, he told Daniel Popper of the Athletic after the game. Williams is confident that his season isn’t over, telling the Athletic, “I’ll be back.” He seems likely to miss at least one game, though. Joshua Palmer, DeAndre Carter and tight end Gerald Everett will see increased opportunity if Williams misses time.

Packers wide receiver Allen Lazard has a shoulder injury. Lazard is Aaron Rodgers’ favorite option, and while it’s difficult to trust the Green Bay passing attack right now, I don’t even want to think about what this might look like without Lazard. The Packers face the Bills on Sunday Night Football in Week 8. Look elsewhere if you want fantasy production.

Texans wide receiver Nico Collins left Sunday’s game with a groin injury. We’ll have to monitor practice reports this week to see if Collins has a chance of playing. Collins has had a good season with a 1.97 yard per route run.

Browns tight end David Njoku suffered a high ankle sprain that won’t require surgery but will keep him out for 2-5 weeks, according to ESPN’s Adam Schefter. Njoku has been a big part of the Browns offense, but maybe Harrison Bryant can carve out a role in his absence.

Be sure to check back for the Friday update and hit us up in the FTN Fantasy Football discord with any additional injury questions.