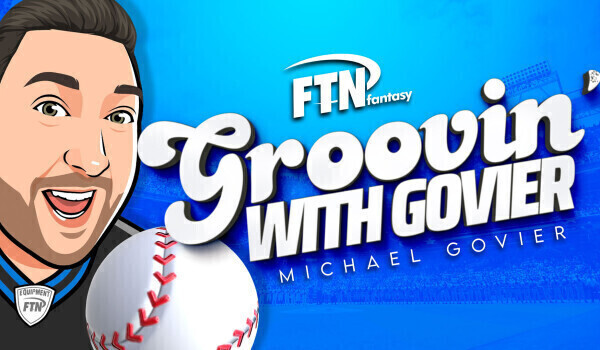 FTN's Michael Govier dives in on the top news around fantasy baseball to find the actionable advice going forward. 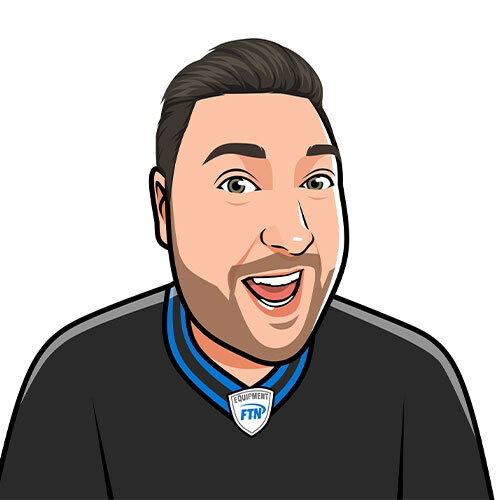 Welcome to the final Groovin' With Govier for 2022! What a ride it has been. For one last time, I have a promo code for you if you want to sign up for any of our useful subscriptions we have here at FTN Fantasy, Daily or Bets. If you love betting on NFL, College Football or NBA, you can ride my coattails to glory with our transparent FTN Bets Tracker! Winners await you by just typing in my promo code “MJGOVIER” where you will save some dough on our unbeatable subscription packages!

I’ve been talking about my ultimate goal for Groovin' With Govier since I started writing it. We are now on the precipice of that goal – providing you with useful insights, experiences and player spotlights so that you can lock down your league championship.

I want you to celebrate like you’re Shohei Ohtani securing his record-breaking $30 million arbitration deal! Or better yet, like you’re Cal effing Raleigh cranking a walk-off dong to secure the first Mariners playoff appearance since back in the day when there was only one Fast & Furious movie!

A Good Time For Reflection & Prayer

There are still a couple days left in the 2022 MLB season thanks to the CBA (remember that nightmare?) negotiations that dragged on too long. Much like Coach Yost after the tragic car-wreck that paralyzed Gerry Bertier, the end of the season is a time for reflection, and for some of you, maybe even a prayer as you try to secure your place in the standings. The question is how do you define your season? Is it a matter of how much you put in versus how much you’re getting back? Is it consistency with at least a top-three finish across all your leagues? Or is there one league to rule them all that makes your nut for the year if you win it?

I entered 13 leagues on NFBC, four on Fantrax and my home league on Yahoo. I am first in my lone OC this year with a five-point lead. I will be hoping variance favors my OC squad over the final three days. My Main Event entry though, is a disappointment. I’m ninth at the moment, but that league is so competitive that I could be 14th or sixth by morning.

I’ll never forget my first live Main Event draft experience back in March. I was drafting next to Paul Sporer for the live draft at the Bellagio while I gloated as I sniped Ozzie Albies from him. He definitely was tilted after I took his guy Albies. Yet, I was the one who ended up on tilt in the long run because that Albies pick, along with Jesús Luzardo, Freddy Peralta, Fernando Tatis Jr. and Chris Sale, all ended up being sources of zeroes for large chunks of the season. As I reflect, I think the joke was on me in Vegas.

Did We Just Become Best Friends?!

I would like to take a moment to pay respect to a kind, yet talented fantasy baseball wizard named Eric Cross. I would like to thank him publicly for stopping me from wasting precious FAAB bucks on Max Meyer and Zack Collins. We are going to win the Tag Team League on NFBC founded by FTN’s very own Matty Davis. The Tag Team is a 15-team 5x5 roto league. It’s not just a clever name, as every team is co-managed. Eric and I finished third last year after leading for a large percentage of the season. So our dominance all season long this go-around is very gratifying.

I have been against co-managing for as long as I can remember. Why do I need anybody else? Ain’t nobody got time for that! There was also the possible headache of having to run every decision and transaction by someone else before executing it. Depending on your league rules, you might have an open free agent waiver wire where players can be picked up daily. In an instance like that, when a new closer takes over or a hot prospect gets called up, I would have to talk it over with my partner before I can make the move.

I also didn’t want to be like a CEO beholden to a board or an annoying CFO who wants receipts. Yet, those are very specific circumstances. In weekly leagues like the Tag Team when FAAB runs once a week, co-managing is much easier. Eric would hit me on the hip with his add/drops and I would respond with mine. It’s pretty basic. Honestly, I hardly knew Eric at all when we agreed to team up for the formation of the Tag Team. That says a lot about us as people.

We’re pretty amicable fellas. If you’re on a roll, maybe it’s best to stay solo. I, on the other hand, am now a proponent of co-managing and will be seeking out more of those opportunities for 2023. Want to know who our best pick in the draft was from the 12-spot? I’d say it was our first pitcher in Round 6: Logan Webb.

This Place Is Dead Anyway

Most of you have already left already for football season, but before I get out of here, I always like to take a look at the wRC+ standings at season’s end. Over the long haul, wRC+ (weighted runs created plus) stands the test of time because it’s much easier to compare players in and out of the era they play in. I hesitate to use wRC+ in shorter sample sizes in season, because I think over longer stretches it’s more indicative of who that player really is.

Anybody could bust loose for a 250 wRC+ over 10 days. It’s like that new move Superpets. It’s kinda cool to see animated versions of Superman and Batman’s dogs, but couldn’t we just get a movie with Superman and Batman instead? Preferably one that left Martha out of it?

Anyways, Aaron Judge is the 2022 Lord of wRC+ at 210. Judge has joined the ranks of tight jersey wearing players from the baseball era when Turkish Beef Roids were all the rage. Since 1961, Judge now has the next-best season by this metric after the four Barry Bonds seasons from 2001-2004 – Bonds’ 244 wRC+ being the standout from the 2002 season. You remember that season. That was the year the Giants blew the World Series because upcoming Arizona Fall League invitee Darren Baker (son of Dusty) tried to block J.T. Snow at home plate in the bottom of the 9th in Game 7, which cost the Giants their first World Series in San Francisco.

Or something along those lines, right? At any rate, one dude who stands out in this year’s wRC+ top 10 is Yandy Díaz. Yandy is the only player outside of Jeff McNeil in the top 30 who has less than 10 homers. Yandy’s draft season ADP: 446.

Andrés Giménez - He was my most drafted hitter. His draft season ADP of 272 on NFBC makes my bosom swell with pride! A .302 hitter with near 20/20 capability at the middle IF spot makes me want to go streaking and see if the KFC is still open! Gimenez has only been caught stealing three times this year. His .173 ISO and .475 SLG are promising building blocks for the future. Sure, 26 doubles feels like it should be around 30-35 with the profile he has, and the Statcast naysayers will point to his 6.3% barrel and 37.7% HHR as potential points for regression in 2023.

But I say not all player development is linear. Let’s enjoy the growth Gimenez showed in 2022! Remember, he was a crucial asset in the trade that sent away franchise player Francisco Lindor to the Mets. ADP is a tool that I understand has value to helping managers understand the market around them, but players like Gimenez make me even more steadfast in my stance to ignore it for as long as I can in the preseason.

Because whether you realize it or not, ADP creeps in your head, in your Excel sheets and in your drafts. No person is free from the bias that ADP creates. It’s like PFOS in the water supply. It’s unavoidable. It is my goal to get it out of my life as much as possible in 2023!

Also, for possibly the first time since 2015 when Troy Tulowitzki was unloaded onto the Blue Jays, we may have to give the Rockies credit! No, no. Wait! Don’t leave! Hear me out. Everybody dumped on Colorado, as we love to do when they signed Bard to an extension rather than trade him at the deadline. Right? That may have been the right move now even if the Rockies were out of it. What would they have really gotten in return for Bard if they dealt the 37 year-old Comeback Player of the Year? Think about it.

Javier Báez - There is no way that I can write my final piece without mentioning this man. Actually, it’s more about me than it is about him. There’s a lesson here about getting away from my process. I was NEVER a Baez guy in fantasy. Either his price was too high or his K rate was too risky. It was like being at Club La Vela in Panama City Beach back in 2003. There was a woman I glanced at who decided to return the favor. She was with her gaggle of gals though, while I was entrenched in early twenty-somethings absurdities with my goofy bozo crew. In another time, with a different setting, who knows how right we could have been for one another.

I suppose I had that same curiosity about Baez over the last five years. When the Tigers signed him, I initially cursed the deal. Yet, by March I was buying into his profile. Somehow I was letting it happen. His career 30% K rate and just over average wRC+ were fading into the background. I was buying into the new lineup that A.J. Hinch would mastermind at Comerica Park in 2022. Next thing I know, I have three shares of him with two of those coming out of Vegas. I wish what happened in Vegas stayed in Vegas.

From Opening Day to Father’s Day, I was saddled with a .194/.237/.306 triple slash with a .543 OPS, four dongs and three swipes. In the Main Event at pick 14, I drafted him in the sixth round! Corey Seager went at the end of that round to Scott Jenstad. No surprise Scott is in first. I will NEVER let the hot air from the local team ever impact my fantasy judgment again. I still don’t even know how it got inside of me in the first place!

Thank you everyone for your time and energy this year! Come find me at FPAZ in November!

Michael combines informed analysis with high-octane entertainment anytime he steps in front of a mic or keyboard. He's an MLB analyst for FTN Fantasy where he writes his weekly musings, 'Groovin' with Govier'. He also covers baseball, football and college sports over at FTN Daily and FTN Bets. Michael creates dope videos for The Game Day NFL and is the host of the infamous Pallazzo Podcast (that's two L's and two Z's!). Follow Michael @mjgovier on Twitter where his sincere and entertaining videos are sure to bring a smile to your face.