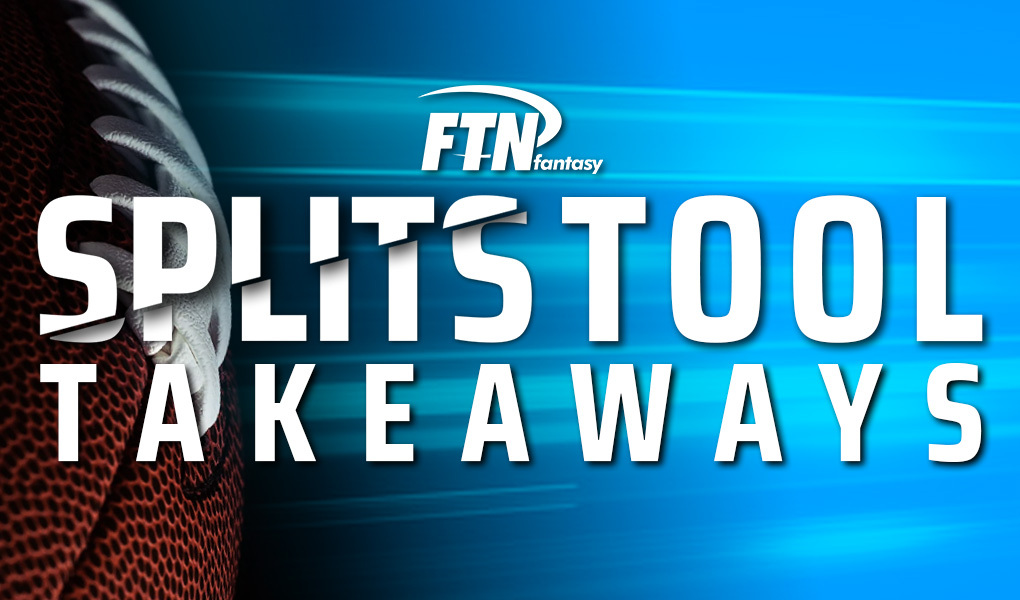 NFL Splits Tool, Week 3: What Does the Trey Lance Injury Mean for the 49ers Offense?

FTN's Sam Choudhury looks at the fantasy football value of the 49ers offensive weapons with the team forced to go back to Jimmy Garoppolo as quarterback.

After seven-plus months of preparation and analysis, the NFL is in full swing as we head into Week 3 of the regular season. Over the offseason, I did an "NFL Splits" series, looking at historical trends to help predict the outlook of the 2022 season. I will be continuing the series during the season by using the FTN Splits Tool and looking at actionable takeaways from the previous week.

The Splits Tool allows me to experiment with different situations, such as active/inactive players, spreads, locations, and more, to get a better understanding of the rest of the season. Users can sign up for an FTN Fantasy subscription and gain access to all the tools needed to dominate their fantasy leagues.

The 49ers traded three first-round picks to move up nine spots and select Trey Lance with the fifth overall pick of the 2021 NFL Draft. In his lone full season at NDSU, Lance led the Bison to a 16-0 record and the 2019 NCAA Division I Championship. He threw for 2,786 yards, 28 touchdowns and zero interceptions. He also rushed for 1,100 yards, finding paydirt 14 times. Despite giving up significant draft capital to acquire Lance, the 49ers opted to bench the rookie in favor of veteran quarterback Jimmy Garoppolo for most of the 2021 season. During the offseason, they restructured Garoppolo's contract to keep him on the team but gave Lance the start in the season opener. Lance struggled in his season debut, losing 19-10 to the Chicago Bears as 6.5-point home favorites. He was abysmal as a passer, completing 13-of-28 passes for 164 yards, one interception and no touchdowns.

However, Lance displayed the coveted "Konami Code" fantasy upside that made him the ideal late-round quarterback. He rushed 13 times for 54 yards and led all quarterbacks in designed run plays (9). Unfortunately, Lance's career took another downhill turn after suffering an ankle injury early in Week 2. Garoppolo filled in admirably for the second-year quarterback, leading the 49ers to a 27-7 win over the Seahawks. The following day, head coach Kyle Shanahan stated that Lance would have to undergo ankle surgery, sidelining him for the rest of the season. The team will move forward with Garoppolo as the starter, creating severe ramifications for the 49ers' offense. Fantasy managers relying on Lance can check out Nick Markowitz's Streaming QBs for Week 3 to find a suitable replacement. In this article, I'm going to break down the implications of Lance's injury and look at how the 49ers' skill players performed with and without Lance as the full-time starter.

After bursting onto the scene as a rookie in 2019, Deebo Samuel's season was cut short in 2020 due to a multitude of injuries. He appeared in just seven games as a sophomore before undergoing season-ending foot surgery. His inability to stay healthy created a cause for concern, with fantasy managers hesitant to pull the trigger on Samuel heading into his third season. However, those who bought the injury dip on Samuel were rewarded with the overall WR3 on the season. In 2021, Samuel caught 77 passes for 1,405 receiving yards and six receiving touchdowns. He also had a significant role as a rusher, carrying the ball 59 times for 365 yards and eight rushing scores. Coming off a historic season, Samuel again fell in drafts due to a change at quarterback and uncertainty regarding his role. Samuel played only two games with Lance as the starter last season and displayed dissatisfaction with his involvement in the run game. Samuel's rushing production remained stagnant in three games with Lance as the full-time starter, averaging less than a single rushing attempt and only 0.67 fewer yards. The primary blow was in the receiving department, where Samuel's production took a significant hit across the board. In Week 1, Samuel caught only two passes from Lance for 14 yards. He salvaged his day as a rusher, carrying the ball eight times for 52 yards and a touchdown. With Garoppolo back at the helm, it's fair to assume Samuel's outlook should resemble the previous season.

The 49ers' 2020 first-round pick, Brandon Aiyuk came out strong in the second half his rookie season. In Weeks 7-15, Aiyuk averaged over 11 targets, 7 receptions and 94 yards, solidifying himself as a borderline elite talent. He had high expectations heading into the 2021 season as seemingly the wide receiver to roster in San Francisco. However, he injured his hamstring late in the preseason and found himself in Kyle Shanahan's doghouse to open the year. Aiyuk struggled to find playing time, seeing the field on only 66.6% of the 49ers' offensive snaps through the first seven weeks. During that stretch, he averaged just 1.5 receptions on 2.67 targets and 16 receiving yards. From Week 8 on, however, Aiyuk became much more involved, and his offensive snap rate increased to 92.3%. In Weeks 8-18, Aiyuk was top-10 in receiving yards (730), averaging over 6 targets, 4 receptions and 67 receiving yards. He finished as a top-15 receiver (WR14) in the final 11 weeks. Miyuki's splits with Jimmy Garoppolo and Trey Lance are skewed due to his lack of playing time earlier in the 2021 season. Overall, he saw more targets with Garoppolo but had more receiving yards with Lance. However, once Garoppolo filled in for Lance in Week 2, Aiyuk led the 49ers in targets (8), receptions (5) and receiving yards (63).

George Kittle has a legitimate case for being the league's best real-life tight end but has struggled with injuries, missing 11 games in 2020-2021. He has already missed the first two games of the 2022 season with a groin injury and is questionable for Week 3. Last season, Kittle finished as the TE3 despite playing only 14 games. He played only one game with Trey Lance as the starter and had one of his worst games of the season. Kittle was targeted only two times for one reception and 29 yards. Although it's a limited sample size, Kittle was not great with Lance and has an established connection with Jimmy Garoppolo. Since Garoppolo opened the 2018 season as the 49ers' starting quarterback, Kittle has finished as a top-three TE every season he's played 14 or more games. He's had two seasons with over 85 receptions and 1,050 receiving yards and went for 71/910/6 in 2021. When active, Kittle is one of the few difference makers at the tight end position and has a proven track record with Garoppolo. It's worth buying Kittle before he gets on the field at suppressed cost.

Outside of Lance and Kittle, the 49ers have already suffered another injury to a critical member of their roster. Like a season ago, they lost their starting running back to a knee injury in the season opener. Elijah Mitchell went down with an MCL sprain in Week 1 and has been placed on the injured reserve, likely out for the next two months. As a result, Jeff Wilson was elevated on the depth chart as the lead back in the 49ers backfield. In the same game Lance went down, Wilson got his first start of the season. Although he didn't stuff the stat sheet, Wilson handled the bulk of the backfield touches, leading the 49ers in carries (18) and rushing yards (84). He lost four carries to Lance and another 14 to third-round rookie running Tyrion Davis-Price. However, the injuries continued to pile on, and Davis-Price also went down with an ankle injury. According to Kyle Shanahan, Davis-Price will be sidelined for multiple weeks, vacating 40% of running back snaps from Week 2. Wilson has played only one game with Lance as the full-time starter but served as the backup to Mitchell in that game. The 49ers have had a different lead rusher every year since Shanahan became the head coach in 2017. With the lead rusher in 2021, Mitchell sidelined for the upcoming weeks, Wilson looks to continue the streak as the next man up in 2022. Wilson provides low-end RB2 or flex value and warrants a start in most leagues.