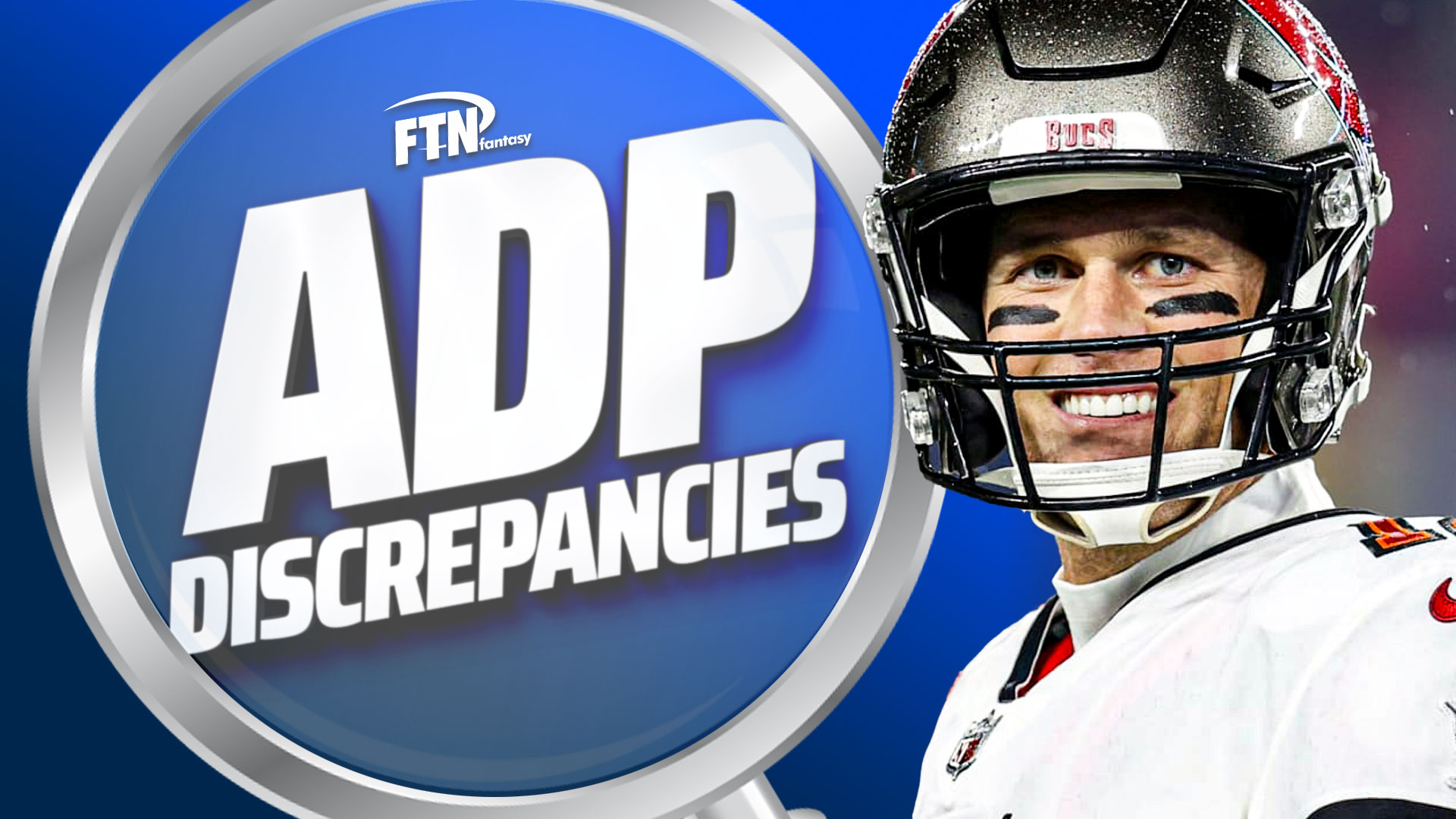 FTN's Sam Choudhury looks at the spots where the drafting community disagrees the most with the FTN Fantasy projections where the projections are more in favor of the player.

That means you need to nail your picks. FTN subscribers can access the award-winning projections from the most accurate ranker in 2021, Jeff Ratcliffe. In this article, I'm going to look at what players are being undervalued by calculating the most significant discrepancies between Underdog's ADP and FTN's projections for each position. You can track ADPs and rankings using the Underdog tool on FTN Fantasy. Sign up for Underdog Fantasy with promo code "FTN" for a 100% deposit match up to $100.

No player has seen his value fluctuate more this offseason than Tom Brady. After falling short to the Rams in the playoffs, Brady announced his retirement… or so we thought. Forty days later, he announced that he had unfinished business and would be returning for his 23rd season. Brady showed no signs of slowing down last season, leading the league with 5,316 passing yards, the third-highest single-season total in NFL history. He also threw for 43 touchdowns and just 12 interceptions while completing 67.5% of his passes. Despite finishing as the QB3 in 2021, drafters on Underdog are hesitant to pull the trigger on a 45-year-old quarterback, letting him slip to the QB11. However, Jeff Ratcliffe has Brady projected for 4,695.9 passing yards, 33.8 passing touchdowns, 50.6 rushing yards and 1.7 rushing touchdowns, the QB8 on the season. The offense should continue to flow through Brady on a Buccaneers team that ranked first in pass attempts, deep ball attempts, red zone attempts, pace of play, air yards and passing touchdowns.

After eight years in the NFL, mainly as a kick returner specialist, Cordarrelle Patterson broke the age model with a career year in his age-30 season. He excelled as both a receiver and a running back, posting career highs in touches (205), yards from scrimmage (1,166) and touchdowns (11). He also maintained his role on special teams, logging 434 yards as a kick returner. Patterson benefited from a Falcons roster devoid of talent that may have gotten worse in 2022. This season, the Falcons will be without Calvin Ridley, who has been suspended after violating the NFL's gambling policy. They will also be without Russell Gage, who operated as the WR1 during Ridley's absence in 2021. Patterson was far and away the most productive running back on the roster but still trailed Mike Davis in snaps. After letting Davis go in the offseason, the Falcons have added minimal competition to the running back room. They spent a Day 3 pick on former BYU running back Tyler Allgeier and signed career backup and journeyman Damien William in free agency. It's hard to envision Patterson replicating an RB9 finish. However, he is currently being drafted outside the RB3 territory as the RB38 on Underdog. Jeff Ratcliffe has Patterson projected as the RB34 with 808.4 scrimmage yards and 6.7 total touchdowns.

Amari Cooper's fantasy stock plummeted after the Cowboys sent him to the Browns in an offseason trade. Since joining the Cowboys in 2018, Cooper has eclipsed 1,100 receiving yards twice while finishing top-10 in receptions (292), receiving yards (3,893) and receiving touchdowns (9) among all wide receivers over that span. Cooper's value got a bump after the Browns made a blockbuster deal and acquired All-Pro quarterback Deshaun Watson, but that bump has reversed since it was announced Watson would miss the first 11 games of the season. With the departure of Jarvis Landry and Odell Beckham from Cleveland, Cooper is more than capable of paying off his price as the No. 1 option on a Browns team that ranks top six in vacated targets (233) and air yards (2,041). Watson has sustained a WR1 in points per game every season of his career and will be back in Week 13. Drafters on Underdog are shying away from the Browns receiver, selecting him as the WR40. Jeff Ratcliffe's projections have Cooper 10 spots higher, despite him slated to play 11 games with Jacoby Brissett under center. Cooper is projected for 110 targets, 73 receptions, 888.9 receiving yards and 5.2 touchdowns on the season.

Since entering the league in 2018, Mike Gesicki has steadily improved each year. He finished as a TE1 (TE11) for a third consecutive season in 2021, setting a career-high in targets (112), receptions (73), and receiving yards (780). Gesicki became a focal point of the offense and a favorite of Tua Tagovailoa, trailing only Jaylen Waddle in targets and receiving yards.

There are a lot of question marks surrounding Gesicki's role in the offense after the Dolphins hired new head coach Mike McDaniel and traded for Tyreek Hill among several offensive acquisitions this offseason. However, Gesicki did receive the franchise tag indicating there is a plan to utilize him in 2022. Drafters on Underdog don't envision Gesicki replicating a TE1 finish, selecting him as the TE19 overall. According to Jeff Ratcliffe's projections, Gesicki is on the borderline of a top-12 TE, coming in as the TE13. Gesicki is projected for 87.5 targets, 56.3 receptions, 634.6 receiving yards, and 3.1 touchdowns on the season. It's also worth noting that in McDaniel's only season as an offensive coordinator, George Kittle, finished as the TE4. 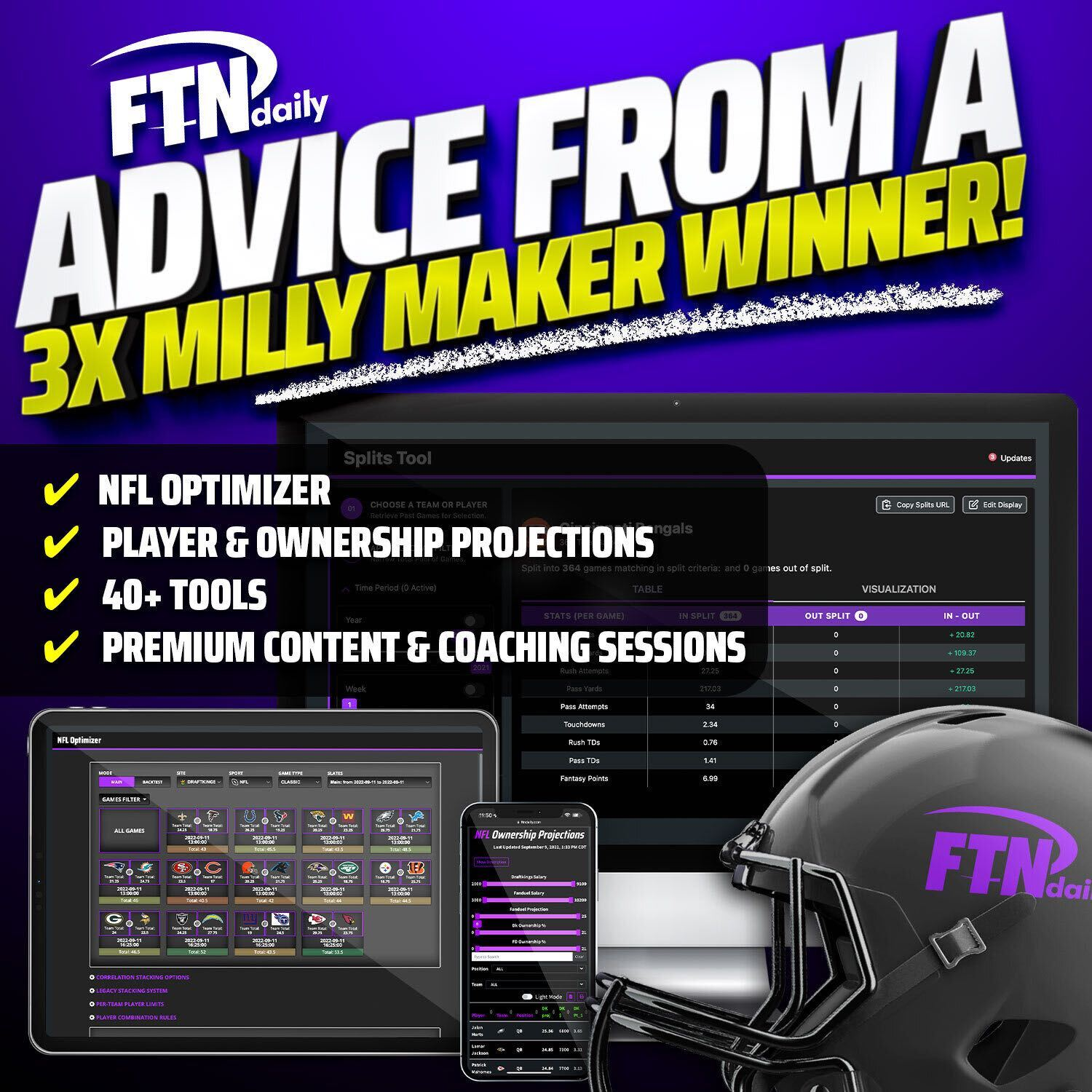