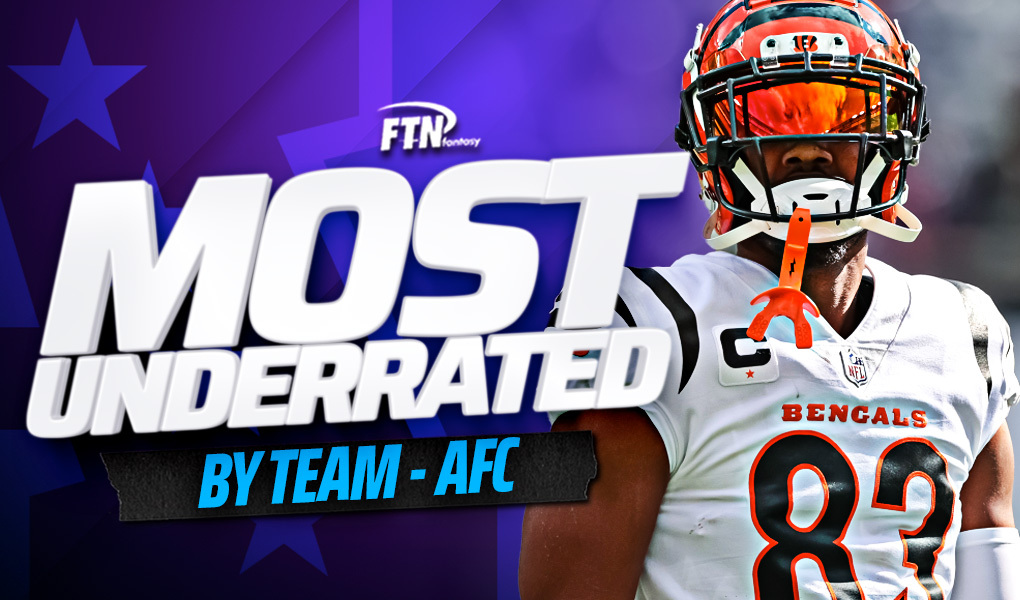 Every AFC Team's Most Underrated Fantasy Football Player in 2022

FTN's Tyler Loechner picks out the player on each roster around the AFC going underrated in fantasy football drafts heading into the 2022 NFL season.

Every fantasy football player loves finding diamonds in the rough, so let’s keep it simple and go team-by-team with the most underrated fantasy players each one hast to offer.

Up first: The AFC.

Want more draft day prep? Check out our 2022 cheat sheets for everything you need to know, our our top 100 PPR fantasy football rankings for free.

Rhamondre Stevenson was already rising up draft boards as a threat to 50/50 split rushing-down work with Damien Harris, but he’s set to move up even faster now that word’s out he might replace James White’s role.

Isaiah McKenzie has been operating as the first-team slot receiver in Bills camp — ahead of Jamison Crowder. McKenzie has apparently been a start at camp, and he’s virtually free in drafts.

Chase Edmonds is a Zero RB target. The agility freak was the overall fantasy RB17 last year from Weeks 1-8 before an injury derailed his season. His competition in Miami is Raheem Mostert and Sony Michel. There’s a solid chance Edmonds ends up being “the guy” to return RB2 value.

All of the Jets players are relatively cheap, with Elijah Moore expected to lead the pack followed by rookie first-rounder Garrett Wilson and vet Corey Davis. While Davis may play a bigger role than people expect, Moore has been the standout in camp so far and has emerged as the clear No. 1 in the offense. From our second-year scouting report on Moore:

Travis Kelce is a late-first-round value going in the middle of the second round. With no Tyreek Hill in Kansas City, Kelce should be peppered with targets even more than usual. Hill — and Demarcus Robinson — leave behind a combined 16 end zone targets, and they were No. 1 and No. 2 on the team in that department last year. No. 3 was Kelce (5), so expect a bump in that area as well.

Gerald Everett goes around TE18 in fantasy drafts, making him virtually free and by far the cheapest access to the Chargers’ passing attack. You have to spent at least a fourth-round pick to land all of Austin Ekeler, Keenan Allen, Mike Williams and Justin Herbert, so it’s tough to call any of them underrated in the price department.

I’m not the world’s biggest Josh Jacobs fan for fantasy, but when he starts going into Round 8, I have to call him a value:

The HOF game blew up Jacobs’ fantasy value in the eyes of many, as the vet handled far more snaps and carries than you’d expect to see in the most meaningless game of football all year. But he’s still by far the best RB on the Raiders, and the offense should see plenty of scoring opportunities with Davante Adams added to the already-good group of pass-catchers.

Most of the Broncos players are either overrated or appropriate rated, so Melvin Gordon kind of wins this award by default. It was a true 50/50 split in Denver last year between Gordon and Javonte Williams, and early word for 2022 is that we’ll see both back plenty again — with both on “snap counts.” The scales will undoubtedly be tipped in Williams’ favor this year, but Williams is currently a second-round pick, while Gordon goes outside the top 100 (double-digit rounds).

Here’s why to love Tyler Boyd from the best fantasy picks by round piece:

I also wrote up Amari Cooper in the best fantasy picks by round piece:

He’s being drafted outside the top 60 overall despite being ranked in the top 40. He should command 25%-plus of the targets in Cleveland, and he’ll get a boost if Deshaun Watson does end up only being suspended for 6 games.

Najee Harris and Diontae Johnson both seem to have reasonable price tags, and the rest of the crew in Pittsburgh is mostly uninspiring. Except for George Pickens. He is absolutely flying up draft boards after a strong start to camp and a great first preseason game. The team has also listed him as a starter on their depth chart, and while preseason depth charts are meaningless 99% of the time, this feels like the 1% that might actually matter.

The Ravens really only have four players to choose from for this: Lamar Jackson, Mark Andrews, Rashod Bateman and J.K. Dobbins. All seem fairly priced, and while Dobbins has the most potential relative to his ADP, coming off the ACL still makes me a little nervous.

That leaves us with Jackson, who is being drafted 18 picks after Josh Allen and 5 picks after Justin Herbert. But dating back to 2019, no QB has scored more fantasy PPG than Jackson’s 26.1. Not Allen, Herbert, or even Patrick Mahomes. Jackson’s true ceiling rivals Allen’s.

Robert Woods goes outside the top 100 in ADP as the WR49 overall. Woods finished as the WR52 last year … in only nine games.

He won’t reach those heights on the likely run-heaviest offense in the NFL playing as the likely No. 2 WR behind rookie Treylon Burks, but as long as he stays healthy, he’s a safe bet to beat his ADP.

The Jaguars have a ton of names you’ve heard of before, but nobody who really pops off the page for fantasy. Travis Etienne is the most likely player to make that leap in 2022 in his de facto rookie year after missing all of 2021 with an injury. We currently have him projected for the sixth-most targets among all RBs. If he’s able to secure a sizable rushing workload as well, Etienne could break out as a fantasy RB1.

You can’t call Jonathan Taylor underrated, and Michael Pittman is already priced as if he’s going to break out even more, which leaves us with Matt Ryan as the default answer here. Don’t love it, don’t hate it. He’s definitely a good target in 2QB leagues, but you can do better in single-QB formats.

“Brandin Cooks” an “underrated” are synonyms at this point. Cooks has finished between WR13 and WR20 in four of his past five seasons, an incredibly consistent run that doesn’t seem likely to break in 2022 as the leading man in Houston again. He had a 27% team target market share last year, ninth in the NFL.