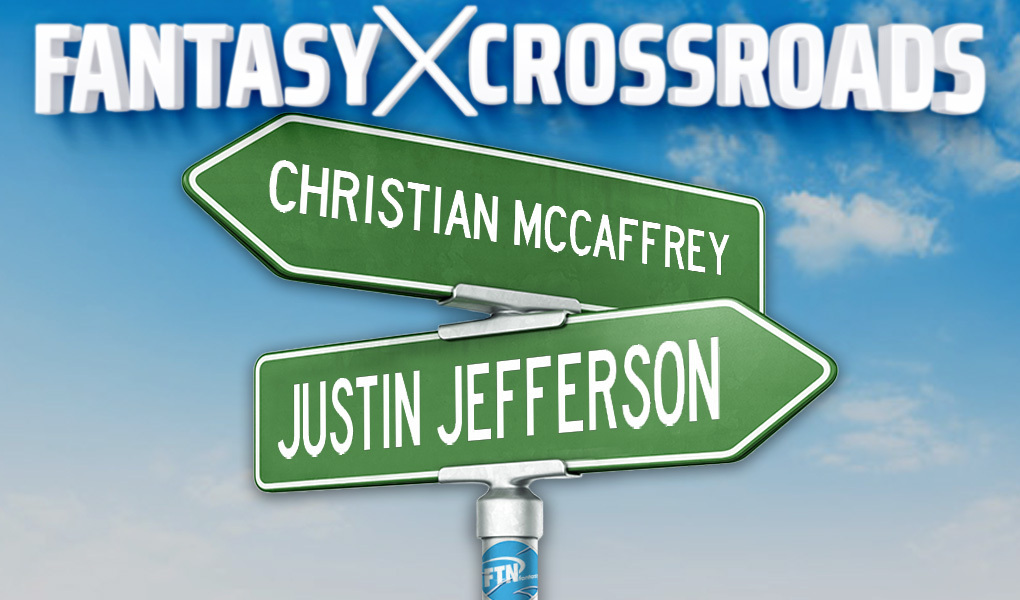 FTN's Adam Pfeifer looks at the No. 2 overall pick in drafts this season -- if Jonathan Taylor is off the board, should you go running back or wide receiver second?

Last week in this space, we debated Cooper Kupp and Justin Jefferson, with the Minnesota wideout getting the edge for me. And because Jefferson is ahead of Kupp for me this season, can an argument be made for him ahead of Panthers running back Christian McCaffrey?

Let’s talk game theory this week: It’s draft day, you have second pick, and Jonathan Taylor is off the board. Are you going running back with the second pick, or wide receiver?

Follow along with the entire Fantasy Crossroads series here!

The Case for McCaffrey

I mean, he’s one of the best players in the history of fantasy football…

Yes, Christian McCaffrey has missed time due to injury the last couple seasons, but it is still impossible to ignore how dominant he has been on a per-game basis. McCaffrey is averaging 22 PPR points per game over the course of his career, with a gaudy 7.5 targets per game during that stretch. In his last two healthy seasons, McCaffrey has eclipsed 100 receptions, and he logged nearly 90% of the offensive snaps during his first three seasons in the league. And in 2021, McCaffrey ranked 15th among all running backs with 343 receiving yards despite only playing in seven games. It is entirely possible that the Panthers don’t play McCaffrey for 90% of the snaps given his health issues, but when he is on the field, he is getting the football. And with Ben McAdoo now the offensive coordinator, Carolina’s offense should be more of a West Coast offense that features the short passing game.

Eli Manning was the quarterback under McAdoo with the Giants, and if you remember anything about Eli’s play style, you’ll recall how fast the ball got out of his hands. From 2014 to 2017, Manning posted the fourth-fastest average time to throw twice, the 11th fastest twice. And during his final two seasons with McAdoo, Manning averaged 2.35 seconds to throw, which is lightning fast. In 2017, 365 of Manning’s pass attempts were less than 2.5 seconds after the snap, which led all quarterbacks. Sam Darnold, meanwhile, has averaged 2.65 and 2.68 seconds to throw, the 12th- and 10th-slowest marks in the league during that stretch. Carolina will also probably play faster this season, which is always good for fantasy. During his first two seasons with the Giants, McAdoo’s offenses ran no-huddle about 45% of the time. For reference, Carolina has operated out of the no-huddle 3.2 and 12% of the time during Brady’s two seasons as the coordinator. From 2014 to 2017, the Giants ranked 10th, second, fourth and second in seconds per play, so a top-10 rank in Carolina is clearly in play this year.

Yes, the injury concerns with McCaffrey are real, but make no mistake — if he stays healthy, he will be the top-scoring non-quarterback (and maybe even including quarterbacks) in all of fantasy.

The Case Against McCaffrey

The only case you can possibly make against McCaffrey is the fact that he has played just 10 games over the last two seasons. And because McCaffrey has essentially been the top selection in fantasy drafts in both of those seasons, many are hesitant to go right back to McCaffrey again in 2022. And related to the injury concerns, we could see the Panthers scale back McCaffrey’s touches and snaps just a little bit because he’s missed so much time over the last two years.

The Case for Jefferson

I’m not sure it is possible to start a career in a more impressive way than Justin Jefferson has. 88-1,400-7 as a rookie followed by 108-1,616-10 as a sophomore, it’s clear that Justin Jefferson is already arguably the best receiver in the game. He is used all over the field, leading the league in air yards (2,071), while handling 45.7% of Minnesota’s air yards, the highest rate among all wideouts in football. Jefferson also flirted with 30% of the team targets, one of the highest rates in the league. He’s already basically elite in all facets of the game, sporting the league’s sixth-best yards per route run mark (2.59). As if it was possible to be even more excited about Jefferson, enter Kevin O’Connell, who was part of Cooper Kupp’s historic 2021 campaign. The Rams did a tremendous job of scheming targets to Kupp, as they lined him up in the backfield very often, giving him free releases and allowing him to make plays. I’d guess we see Jefferson used in a similar way, and with the Vikings passing rate expected to climb, don’t be surprised if Jefferson continues to break records. We have also seen the Rams offenses that O’Connell was part of hyper target the wide receiver position. This past season is a bit skewed due to Kupp’s insane usage but Los Angeles targeted receivers 61.4% of the time, which was the third-highest rate by a team since the 2018 season. It was also well above the league average of 56%. Jefferson could easily lead the NFL in targets this season and should continue to dominate the league for years to come.

Jefferson definitely has a case for being ranked the No. 2 player in all of fantasy. While it seems unlikely any player flirts with what Kupp did in 2021, if anyone were to do it, it would absolutely be Jefferson, especially with O’Connell joining the Vikings this offseason.

The Case Against Jefferson

In terms of on-field ability, there really aren’t any cases to be made against Jefferson. The only one I could even think of is the fact that when healthy, Adam Thielen still appears to be Kirk Cousins’ red zone target. Thielen has scored a healthy 24 touchdowns over the last two seasons, including 10 through the first 11 weeks of the 2021 campaign. Injuries are starting to play a factor, however, as he’s missed 11 contests over the past three seasons. But in 2020, Thielen paced all receivers in both end zone targets (20) and end zone touchdowns (13).

When it comes to ranking Jefferson as a top-two player, I truly don’t think it is insane. However, the wide receiver position is much deeper than the running back position, with fewer tier breaks. Taking Jefferson second overall means passing on a running back there and likely taking one in the second round. By current ADP, assuming a 12-team league, taking Jefferson second leaves you with an Aaron Jones or Leonard Fournette as your RB1 if you go running back in Round 2, whereas taking McCaffrey second gives you someone like Mike Evans or Tyreek Hill as your top receiver. It’s a matter of what build looks better.

This would be a lot closer if McCaffrey just didn’t catch so many passes. In many instances, you can compare a running back and wide receiver and just give the wideout the edge in PPR formats. The problem in this case is the fact that when healthy, McCaffrey has 100-catch upside. As much as I love Jefferson, the wide receiver position is just so much deeper and presents so much more upside, especially in the middle rounds of drafts. I fully understand the hesitancy with McCaffrey due to his injury history. However, I cannot overlook how dominant he is when he is on the field and if you are worried, you can still draft running backs in Rounds 2 and 3 for insurance, especially because the wide receiver position is deep.