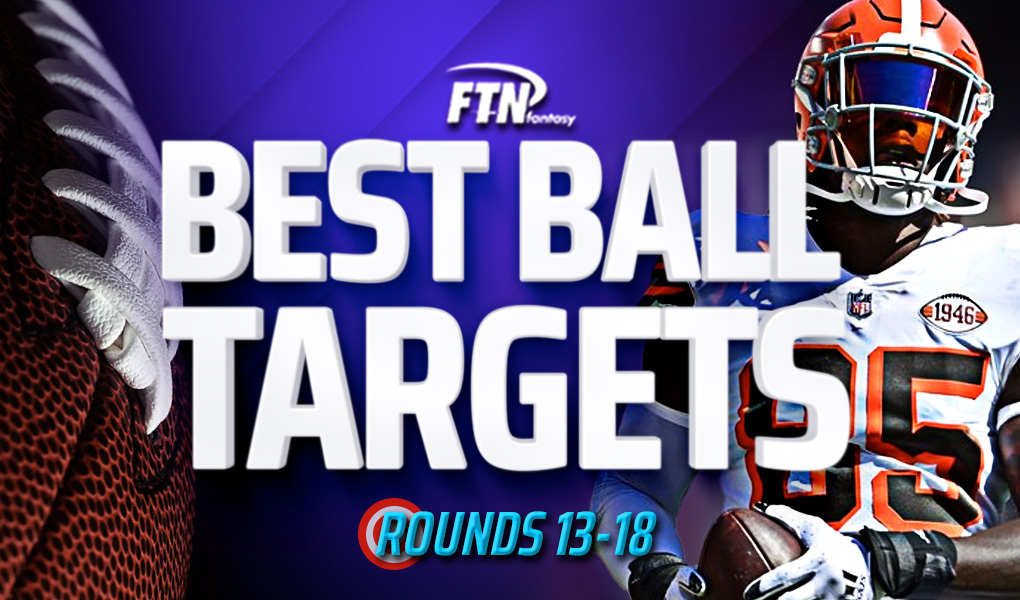 FTN's Sam Choudhury picks out his favorite target in each of the late rounds of best ball drafts for 2022.

Three months ago, Underdog Fantasy launched the largest best ball tournament in history, featuring 451,200 entries and $10 million in total prizes. 30% of the prize pool will be split among three entries, including $2 million to first, $1 million to second, and $1 million to the highest-scoring team in the regular season (Weeks 1-14). Drafts consist of 12-person lobbies with 18 rounds.

That means you need to nail your picks. So, I'm going round-by-round and highlighting some of my favorite players. Today, Rounds 7-12. As ADP changes throughout the summer, you can stay up to date using the Underdog tool on FTN Fantasy. Sign up for Underdog Fantasy with promo code "FTN" for a 100% deposit match up to $100.

After spending the first four years of his career with the Jets, Robbie Anderson broke out once he joined his former college head coach Matt Rhule and the Panthers in 2020. He caught a career-high 95 passes on 136 targets and 1,096 yards. Unfortunately, things got worse for Anderson after the Panthers traded three future draft picks to the Jets in exchange for Anderson's former quarterback, Sam Darnold. Anderson was abysmal last season, catching only 53 passes on 110 targets for a career-low 519 yards. He surpassed 60 receiving yards only once last season and had a career-low 9.8 yards per reception. The Panthers made another move for a quarterback this offseason, sending a conditional 2024 fifth-round draft pick for former Browns quarterback Baker Mayfield. Although Anderson has publicly displayed his displeasure for Mayfield, he should benefit from a new signal caller under center. Anderson has already shown top-20 upside in Carolina and is worth taking a shot on in the later rounds.

Chicago rookie sixth-rounder Khalil Herbert burst onto the scene while filling in for an injured David Montgomery last year. Montgomery was placed on injured reserve after suffering a knee sprain in a Week 4 matchup against the Detroit Lions. The incumbent backup, Damien Williams, was also placed on the COVID-19 list, allowing Herbert to take command of the backfield. Herbert averaged 21.75 touches and 97 yards from scrimmage in the four games without Montgomery. Unfortunately, in the games with Montgomery active (12), Herbert was a non-factor, averaging only 7.84 scrimmage yards on 2.5 touches. There's no telling what Herbert's role will be next season with new head coach Matt Eberflus. However, he has already shown the ability to handle a heavy workload and is one injury away from becoming a league winner.

Former 2017 first-round pick David Njoku signed a four-year, $56.75 million contract extension this offseason to remain in Cleveland through 2025. Head coach Kevin Stefanski has publicly acknowledged Njoku's development as an all-around tight end and has made it clear that he will be a focal point of the offense. Money talks in the NFL, and the Browns' decision to sign Njoku to the fourth-highest annual deal among all tight ends bode well for his future. Through five seasons, Njoku has totaled 148 receptions for 1,754 yards and 15 TDs, primarily as a part-time player. Last season, he saw only 64% of the offensive snaps, splitting time with Austin Hooper and Harrison Bryant. During the offseason, the Browns released Hooper and traded for All-Pro quarterback Deshaun Watson. Watson's potential suspension remains a question mark. However, there is no denying he will be a significant upgrade from Baker Mayfield when he’s available. Njoku is in line for a breakout year on a Browns team that has targeted tight ends at a top-three rate in back-to-back seasons.

Since entering the league in 2011, Julio Jones has put together a Hall of Fame resume and will go down as one of the best wide receivers to play the game. Unfortunately, injuries have started to pile up — Jones has missed 14 games over the past two seasons. In his lone season with the Tennessee Titans, Jones caught only 31 passes for 434 yards and one touchdown. He played in 10 games but only saw over 70% of offensive snaps in three of them. Despite a disappointing season, Jones was still effective, averaging 14 yards per catch, 9.0 yards per target and 1.84 yards per route run. One of the biggest edges of drafting early is buying the dip on players and embracing uncertainty. Although the 33-year-old wide receiver is currently unsigned, his ADP will jump multiple rounds as soon as he finds a new home.

The Buffalo Bills let veteran wide receivers Cole Beasley and Emmanuel Sanders walk in free agency and have a combined 199 vacated targets and 31.9% target share. Early in the offseason, Isaiah McKenzie emerged as the favorite to start in the slot until the Bills signed former New York Jets wide receiver Jamison Crowder in free agency. Crowder was signed to a one-year, $4 million deal, but he isn't a lock to surpass McKenzie on the depth chart. Crowder will be 29 years old at the start of next season and has yet to eclipse 900 receiving yards in seven seasons in the NFL. McKenzie dominated in the one game Beasley missed last year, catching 11 passes on 12 targets for 125 yards and one touchdown. McKenzie is a perfect late-round best ball candidate with the ability to pop off for spike weeks and is priced five-plus rounds cheaper than his counterpart. He provides cheap exposure to a Bills offense that ranked top-five in pass attempts last season, tied to the back-to-back and consensus QB1, Josh Allen.

Sony Michel has had a disappointing career since being drafted by the New England Patriots in the first round of the 2018 NFL Draft. In his four seasons in New England, Michel never exceeded 1,000 rushing yards. He appeared in only nine games in 2020 after suffering a knee injury and dealing with COVID-19. The Rams traded for Michel last offseason after Cam Akers tore his Achilles, bringing him in as a depth piece behind Darrell Henderson. Michel took over the Rams backfield in Week 13 after Henderson was placed on injured reserve with a knee injury. In the final six weeks of the season, Michel led the league in carries (129) and was third in rushing yards (540). With the return of Akers, the Rams declined to bring back Michel and let him walk in free agency. As a result, Michel signed a one-year, $1.75M contract with the Dolphins. He is part of a crowded backfield featuring Chase Edmonds and Raheem Mostert but is the cheapest of the trio. New Dolphins head coach Mike McDaniel has favored a running back by committee while calling plays for the San Francisco 49ers and will likely take the same approach in Miami. Michel is worth taking a shot on in the last round and could end up leading the Dolphins' backfield.