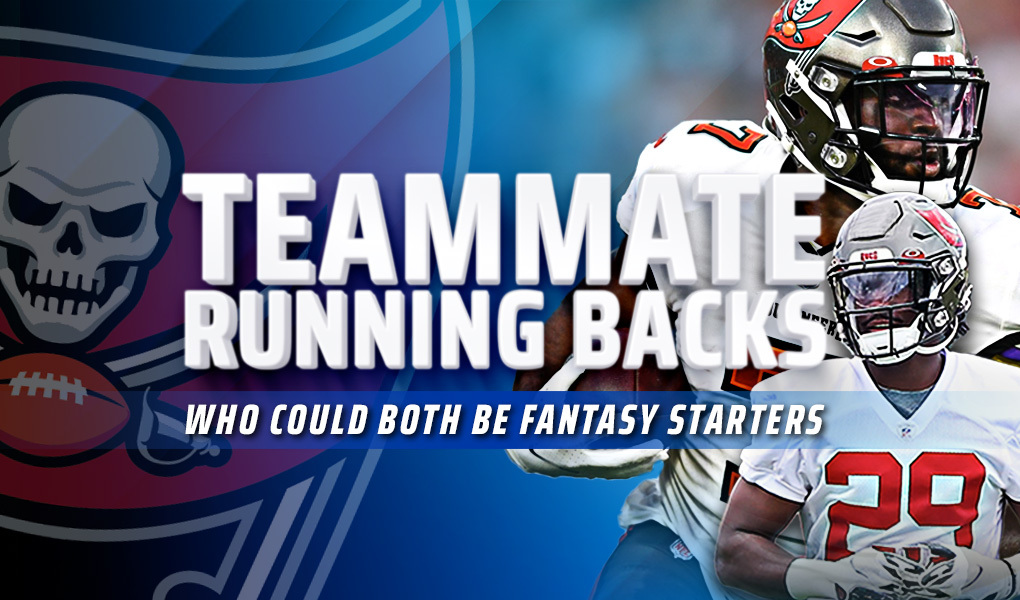 Fantasy Football 2022: Teammate RBs Who Could Both Be Fantasy Starters

FTN's Jeremy Popielarz picks out some RB duos around the league who could both find their way into the top 24 RB fantasy leaderboard by the end of the year.

Over the past few years, we have seen a huge shift in the NFL at the running back position, as many teams are leaning toward the committee method instead of the traditional “bell cow” role. With this shift in philosophy, we have also begun to see more running backs becoming fantasy viable.

So who’s next? Below I have six pairs of teammates who are candidates to join this list in 2022.

(One important note: Having a second running back who produces top-24 numbers isn’t always a good thing, as it generally — but not always, see Alvin Kamara and Mark Ingram both finishing top-six in 2017 — caps the upside of both backs. This is more of a floor exercise than a ceiling one, though there are still backs on this list who can be surefire RB1s.)

Over the past two seasons, the Chargers have been trying to supplement Austin Ekeler, largely to no avail. This season they might have found their guy in rookie fourth-rounder Isaiah Spiller. He was highly productive in three seasons at Texas A&M, producing 2,993 rushing yards, 25 rushing touchdowns, 585 receiving yards and 1 receiving touchdown. Many scouts felt he left some meat on the bone though, mainly due to a lack of overall speed and wiggle. In Los Angeles, he will be asked to be the power back in this tandem a majority of the time.

As Ekeler enters his age-27 season off a career-high 206 carries in 2021, the Chargers might look to give him more of a break in ground work and let him focus more on the receiving side of things. He’s missed seven games the last two years and been banged up in more. He obviously won’t give up all his carries, but ceding some to Spiller would be a good way for Ekeler to stay healthy.

Last season, the Chargers called a pass 63% of the time, resulting in an RB-leading 94 targets for Ekeler (tied with Najee Harris). Once in the red zone, though, the team leaned on the run game more, as the pass rate dropped to 53%, with Ekeler seeing 48 of the team’s 104 red-zone rush attempts. It wouldn’t be a shock to see Spiller soak up some of Ekeler’s red-zone touches (in addition to the 33 red-zone carries that went to Justin Jackson, Larry Rountree, Joshua Kelley and somehow Andre Roberts), giving the rookie some real weekly value.

The arrival of Spiller in Los Angeles probably caps Ekeler’s ceiling a bit, but it gives the duo a nice path to the possibility of a split similar to the one we saw from Aaron Jones and AJ Dillon in Green Bay last season, and that would leave Ekeler as an RB1 and allow Spiller to sneak in to the back end of the RB2 ranks.

This dynamic duo has already accomplished the feat once, with Aaron Jones the RB9 and AJ Dillon RB22 just last season. We definitely couldn’t leave them off the 2022 list. After trading away Davante Adams, the Packers have a clear hole at receiver, and Jones should be one of the ones tasked with filling it. Since his first day in Green Bay, Jones has thrived as a receiver, with 183 receptions for 1,448 yards and 12 touchdowns over his five seasons. And that was largely with Adams around, but check this out: Per the FTN Fantasy splits tool, in eight games without Adams active in his career, Jones has seen his per-game receiving average go from 3.6 targets, 19.3 yards and 0.1 TDs to 5.9, 48.5 and 0.5, respectively.

In other words, Jones should get a lot of receiving work in 2022. And if he’s working more as a receiver, that puts Dillon on the field more often as well — in the one game Adams missed in 2021, Jones saw 11 targets, and that left Dillon to get 16 carries, compared to his 10.5-carry average the rest of the season. Dillon just finished as an RB2 with 803 yards, and he’s set up for a dramatic increase in work in 2022.

Like the aforementioned Jones and Dillon, Javonte Williams (RB17) and Melvin Gordon (RB21) just accomplished this feat a year ago. Williams impressed as a rookie, rushing for 903 yards on 203 carries and scoring 4 times on the ground. That ground work was almost identical to Gordon’s, as the veteran managed 918 yards on an identical 203 carries, scoring 8 times. Williams bested Gordon as a receiver, with 43 receptions and 316 yards compared to 28 and 213 for Gordon.

Williams came into the offseason as one of the most popular breakout picks in fantasy football, but with the Broncos choosing to re-sign Gordon in free agency, it’s more likely we again see a split in 2022, albeit one slightly more tilted Williams’ direction. Even before Gordon returned to Denver, new Broncos head coach Nathaniel Hackett was vocal about wanting a two-headed backfield, and that Williams was young and still had more to learn. That said, Hackett came to Denver from Green Bay, where, as we mentioned, he just produced two top-24 backs a year ago. Those two strong backs with a huge improvement at quarterback (with Russell Wilson replacing Teddy Bridgewater/Drew Lock) should allow Williams and Gordon to both put up fantasy-starter numbers in 2022.

Last season, Leonard Fournette dominated the fantasy world, finishing as the PPR RB6 in a Tom Brady-led offense. That came thanks to a big workload, including 180 carries, 84 targets, 1,266 scrimmage yards and 10 touchdowns. This offseason, Fournette re-signed a three-year deal to return to Tampa, and then the team picked up Rachaad White in the third round of the draft. White was a very productive back at Arizona State in 2021, putting up 1,456 scrimmage yards and 16 touchdowns on 225 touches in 2021.

Both backs should have a bit role in the Tampa Bay offense in 2022, especially with Chris Godwin likely to miss at least a decent chunk of the season and with Rob Gronkowski announcing his retirement this week. The expectation is that White will be able to carve out a role as the receiving back akin to how Brady used James White in New England, soaking up some of the vacated targets and allowing Fournette to focus on the ground work. That thunder-and-lightning style has produced success in recent years, like when Jonathan Taylor and Nyheim Hines both finishes as top-24 backs in Indianapolis in 2020.

As a mainstay in the Cowboys offense since being drafted six years ago, Ezekiel Elliott has been one of the most stable fantasy running backs. That’s been highlighted by consistent touchdown production, with Elliott averaging 11.3 scores a season for his career. He had yet another 1,000 yard rushing season last year with plenty of rushing scores (1,002 yards, 10 touchdowns), but he took a step back as a receiver, with a 65-target total that was his lowest since 2017.

The main reason for that was the emergence of Tony Pollard, who looked explosive in both aspects of the game. Pollard produced 719 rushing yards and 2 touchdowns on 130 carries, along with 337 yards on 39 receptions, leading him a RB27 finish in PPR. In 2022, we can expect the Cowboys to use both of these players heavily, and both in specific roles. Elliott will continue his red-zone role and main ball-carrier duties on rushing downs, but he will likely continue to see a decline in passing work as the Cowboys lean Pollard’s way here. That will help elevate Pollard into the top 24 along with Elliott.

As maybe of the best running back tandem in the league, Nick Chubb and Kareem Hunt obviously warrant a spot on this list. 2021 was mostly a lost year for Hunt (he played only eight games), but we’re only a year removed from the two both finishing as low-end RB1s, with Hunt RB10 and Chubb RB11 in PPR in 2020.

Heading into 2022, there are plenty of questions around the Browns offense, especially around the availability of the facing-a-suspension Deshaun Watson. But no matter how that plays out, Chubb and Hunt should be in line for a heavy workload. If Watson is available for most or all of the season, the offense as a whole gets a boost, and that will help elevate the running backs, especially as the team enters the red zone more often. And if Watson misses most or all of the season, the team will likely turn to Jacoby Brissett as the starter, which would probably mean a massive amount of work from the running backs. Either way, these two should be in line for solid top-20 RB seasons, especially being the league’s fourth-best offensive line.