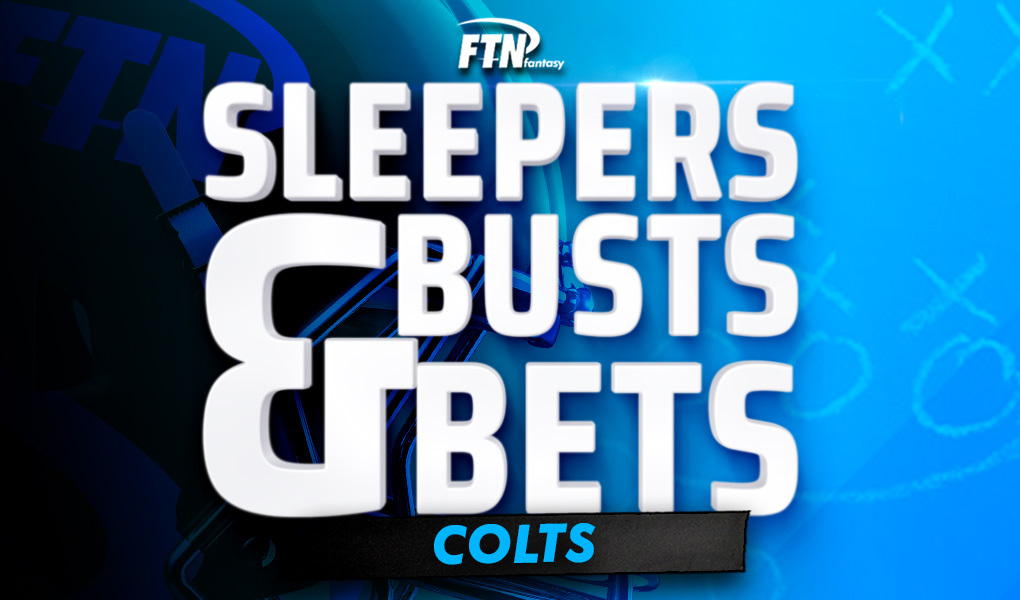 FTN's Jeremy Popielarz and Daniel Kelley offer up their picks for key names and situations to know for fantasy football on the Colts in 2022.

Jeremy Popielarz and Daniel Kelley  continue with the 2022 Sleepers, Busts and Bets series to preview all 32 NFL teams for the upcoming year. Next up: The Indianapolis Colts.

Popielarz: Michael Pittman Is a Top-12 PPR WR
Kelley: Jonathan Taylor Is Not the RB1

Maybe it’s a broken record at this point, but here we are again: Parris Campbell has an opportunity to be a quality fantasy asset. Over his short career, the question has never been about his talent, but whether he can stay healthy—he’s played only 15 games in his three seasons, never topping 7 in a year. In his 15 games, Campbell has 34 receptions, 360 yards and 2 touchdowns. Heading into 2022, though, he is set to be the top slot receiver in Indianapolis, setting him up to be in line for a large target share. This is great news especially with an upgrade at quarterback, with Matt Ryan now at the helm of the offense. Last season, 17 of Campbell's 20 targets were first read targets, showing us his ability to create separation. This is something Ryan will be able to take advantage of, turning Campbell into a PPR machine. Even though the Colts tend to lean heavily on Jonathan Taylor, they still threw the ball over 500 times last season. That leaves plenty of opportunity for Campbell to produce weekly fantasy value. It is a big “if,” but if Campbell is healthy for a whole season, he will be a great weekly flex player or even WR3 in 2022.

Over the last 15 years, the Colts lead the league in PPR scoring from the tight end position (3,642.3 points), with only the Eagles within 100 points of them in that time. They have more top-five team positional finishes in that time (seven) than finishes outside the top 12 (five). The reason you haven’t heard much about the Colts’ TE machine in that time? It’s almost always been a group — Dallas Clark and Jacob Tamme, Coby Fleener and Dwayne Allen, Jack Doyle and Eric Ebron.

This year, there’s no duo. Doyle retired, Kylen Granson didn’t show enough as a 23-year-old rookie to be counted on as a regular weapon, and the depth chart after Granson is largely rookies (third-rounder Jelani Woods and sixth-rounder Andrew Ogletree). That leaves Mo Alie-Cox. He hasn’t gotten massive work in his four years (a combined 80 receptions on 108 targets for 936 yards and 8 touchdowns), but he does have four weeks as a TE1 in the last two seasons. New Colts quarterback Matt Ryan has produced TE1 seasons with Tony Gonzalez and Kyle Pitts, which most quarterbacks could do, but he’s also gotten there with Austin Hooper and Hayden Hurst, and he even got a 30-year-old Tamme to a TE14 finish in 2015. Alie-Cox has back-end TE1 upside at absolute best, but he’s available at a draft price of “absolutely free,” and he should be more valuable than that.

It’s hard to imagine Jonathan Taylor as a major bust in 2021, but he definitely could be a disappointment for some managers. Last season, Taylor exploded for a position-leading 373 PPR points, averaging 22 points per game. That represented a significant increase from his rookie year, when he was the RB6 but with only 16.9 PPR PPG. As the catalyst of the Colts offense last year, he saw 331 carries and 51 targets, producing 2,171 scrimmage yards and 20 touchdowns. With the workload he is expected to get, he is the favorite to be the RB1 again — but with what should be a slightly improved passing game, he could actually see a slight downtick in opportunities, ultimately leading to fewer fantasy points. On top of that, the Colts want to get Nyheim Hines more involved in the offense this season. This may not directly pull carries away from Taylor, but it may take away some of his receiving targets, as they have been using Hines in the slot in minicamp thus far. This dip will not allow him to slip outside the top 10, but it is more than possible to see him slip down the rankings, and even slipping outside the top five.

To be clear, it seems very unlikely that, assuming health, Michael Pittman will truly fall flat on his face. He’s the unquestioned top receiving option on a team that just finished ninth in points last year and almost certainly improved at the quarterback position this offseason. He finished as the WR17 in PPR last year and is currently at the same point in ADP. The question, though, is how high he can climb. The Colts were one of the run-heaviest teams in football in 2021, calling run on 48.9% of their plays, fifth most.

Maybe the switch from Carson Wentz to Matt Ryan encourages them to switch that up, but this is still a team that is built for Jonathan Taylor to carry the load. And then of course there’s this:

Much of the above graph is Julio Jones-based, to be sure, but then Kyle Pitts was the Falcons’ unquestioned No. 1 receiver in 2021 and he scored exactly one touchdown on the season. Over the last five years, Ryan is second in the league in red-zone pass attempts but 27th (min. 30 attempts) in red-zone touchdown percentage. Inside the 10-yard line, it’s similar — third in attempts, 24th in TD percentage. Pittman is the Colts’ No. 1 for certain, but between a run-heavy offense and a quarterback who struggles in close, he doesn’t have much room to improve on his draft position, and if he has even a bit of bad luck, he could be a disappointment.

Last season, Michael Pittman doubled his production from his rookie season, while topping 1,000 yards for the first time. This came in large part to a huge target jump, going from 61 as a rookie to 129 in 2021. That increase led to 88 receptions, 1,082 yards, 6 touchdowns and a WR17 finish in PPR. He finished as a weekly WR1 three times (peaking with a WR2 finish in Week 8) and a WR2 five times, making him one of the safer weekly plays. In 2022, he will get an upgrade at quarterback, especially in the accuracy department. Combine that with the lack of playmakers on the roster, and it is highly likely he will see another season of 120-plus targets. If Pittman improves his reception total and converts a few more touchdowns, it will allow him to make that jump into the top tier of fantasy producers — he was only 1.4 PPR points per game away from the top 12 wide receivers in 2021, and he should get there in 2022.

Kelley: Jonathan Taylor Does Not Finish as the RB1

This isn’t necessarily the same as saying Jonathan Taylor shouldn’t go first in drafts. I would take Christian McCaffrey, but it’s inarguable that Taylor has the highest if-healthy floor at the position. But natural attrition says he’s unlikely to stay at the top of the heap (no running back has repeated as the overall RB1 since Priest Holmes in 2002-2003) and a slightly lower ceiling (Taylor had the lowest point total for the overall RB1 since 2015) says that, despite an incredibly high floor, Taylor is unlikely to put up the best numbers at the position again.

On top of that, Taylor doesn’t offer the same receiving potential as a typical RB1 — he had 51 targets and 40 receptions last year — among the 15 best RB seasons of the last decade, only Adrian Peterson in 2012 had similarly low (in fact, identical) numbers, and the average performance from those top backs as 99.1 targets and 76.2 receptions. Those are just numbers Taylor’s unlikely to get to with Nyheim Hines hanging around in this backfield (99.1 and 76.2 are more than Taylor has in his two years combined).