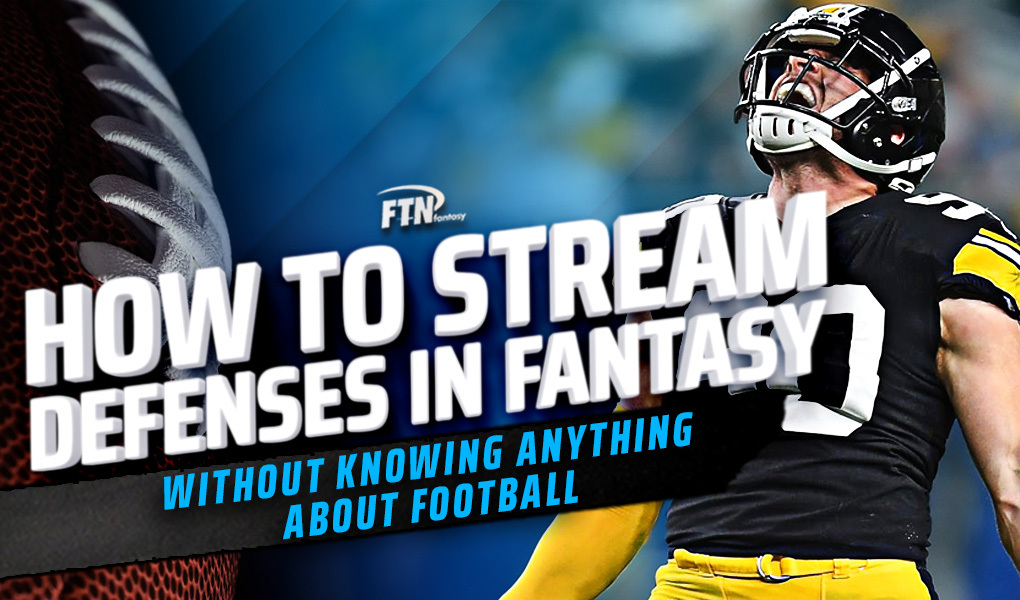 Streaming a DST in Fantasy Without Knowing Anything About Football

FTN's Daniel Kelley breaks down why it doesn't make sense to draft a defense in fantasy any earlier than you have to.

In simplest terms, a fantasy football draft pick is a lottery ticket. The early rounders carry the best odds, but they cost you a lot. Late-round picks are cheap and potentially life-changing if they hit, but the odds are long, so you have to grab a bunch of them to have a real chance at something.

Why, then, would you waste one of those chances on a ticket whose best-case payoff is “eh, that’s fine I guess”?

It’s not that we are bad at projecting season-long defense/special teams performance (we are bad at it, but that’s not the point). It’s that, even if we nail it, there’s no ceiling. The 2019 New England Patriots were a legendary, can-you-believe-how-good-they-are, we’ll-write-stories-about-them defense for fantasy. They averaged 14.8 fantasy points per game. Do you know who else averaged 14.8 in PPR scoring that year? Jarvis Landry. Austin Hooper. Heck, Jacoby Brissett. A defense can blow our minds and be the stuff of lore, and even then there’s no way for it to be that fantasy valuable.

In other words, don’t draft a defense high. Frankly, unless your league demands it, don’t draft a defense at all, and spend the time between draft and Week 1 messing around with your roster until forced to grab a defense before the games start. But at the very least, no matter how long you are waiting to draft your defense, wait a little longer. Second-to-last round, defense. Last round, kicker. Every year. And even then, if you are holding onto your defense for more than a few weeks at a time (or, god forbid, stashing one over the bye week), you’re only hurting yourself.

Want proof? Here is how to outscore the top-drafted defense in fantasy by streaming defense without knowing anything at all about football. I can give the below steps to my 4-year-olds, and they’ll beat the top-drafted defense from the year before (in this case, Pittsburgh’s DST was the first off the board in 2021, per Fantasy Football Calculator).

The Score to Beat

Last year’s top-drafted defense was the Steelers, typically going late in the ninth round or early in the 10th. Per FF Calc, the Rams’ unit went one pick later. So those are our goal totals. Last year, per FantasyPros’ scoring, the Pittsburgh DST put up 111.0 points, while the Rams scored 121.0.

(One note before we go too far into the weeds: DST scoring systems vary wildly from site to site. Your host site might not match up perfectly with the numbers here. But the overall point should be just fine.)

Remember, the goal here is to find a better way to accrue defense/special teams fantasy points without knowing anything about football. If you can’t tell Russell Wilson from Zach Wilson, Josh Allen from Brandon Allen, this method should still work. So this isn’t “study the matchups and find the quarterback who is struggling.” That would be too complicated.

No, all you need for this is a link to the NFL schedule, and maybe a calculator if dividing by 3 is taxing.

Here’s what you do:

That’s literally it. For Weeks 2 and 3, before there are three weeks of games to average, just average the games you have. For Week 1, we assume a complete zero in the knowledge department and take the average DST score that week.

So other than our Week 1 average (5.8 fantasy points), we have three DSTs a week (occasionally four when teams had tied PPG averages) to pick at random. With that information, I created three sets of results:

I took those three results (and the Pittsburgh DST’s score, for comparison), and … let’s take a look:

Well, how ‘bout that. Yes, if you had happened to stumble into the worst possible choice each week using nothing but a pick-bad-offenses-and-throw-a-dart strategy, it would have failed, but with even marginal luck, you’re not only outscoring the top-drafted defense, you’re blowing it out of the water, roughly 2 points better every week. And if you happened to get insanely lucky and stumble into the top option each week? You’re setting DST records.

Obviously, this method ignores a few details — some of the units you want might not be available, you might not be the only one in your league streaming defenses, etc. But also, since you reading this do know a little about football, this is obviously just a starting point from which you can clearly improve. For example, in Week 10, this method would have given you three defenses to choose from — Arizona, Pittsburgh and Las Vegas. Pittsburgh you likely could not have streamed, as even though they disappointed on the season they remained heavily rostered. But also, Las Vegas was an option that week because they faced a team that had scored only 12.0 points per game in its preceding three games — the Kansas City Chiefs. Heading into Week 10, the Chiefs had lost 27-3 to the Titans and beaten the Giants and Packers 20-17 and 13-7, respectively. A knows-nothing-about-football person using this method might have grabbed the Raiders and put up all of -2 fantasy points. No one who knows even a little would have done that, though.

That’s a lot of work, though, right? Maybe drafting the Steelers or Rams defense won’t reach that same ceiling, but there’s value in having a reliable floor and not having to stress each week, isn’t it?

Well, remember how we started here. Every draft pick is a lottery ticket. Drafting a defense might be one of those $2 tickets that guarantees you at least $1 back — enticing! Can’t totally lose! — but has a maximum payout of like $20. You might not go broke, but you’re never going to make your riches, and riches are what we do this for.

No, the middle rounds aren’t for the low-ceiling lottery tickets. They’re for taking your shots. So instead of taking a defense that you more or less know isn’t going to make the difference in your season, take a shot on a player who probably isn’t going to be the difference-maker, but who could be. If you passed on the Pittsburgh defense in 2021, ADP says the next group of players off the board included disappointing names like DJ Chark, David Johnson, Jarvis Landry and Giovani Bernard. But that group also included Darnell Mooney, Joe Burrow and Mike Williams. The point isn’t that you’ll win the Powerball with those picks; the point is that you could.