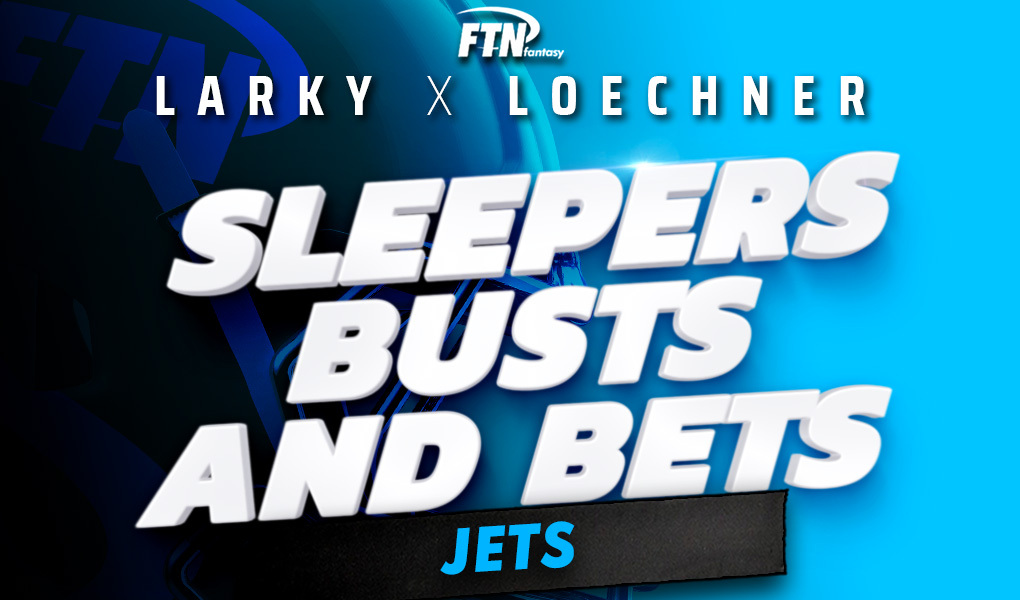 FTN's Tyler Loechner and Josh Larky offer up their picks for key names and situations to know for fantasy football on the Jets in 2022.

Tyler Loechner and Josh Larky continue with the 2022 Sleepers, Busts, and Bets series to preview all 32 NFL teams for the upcoming year. Next up: The Houston Texans.

Wilson is a player I have been enamored with since he entered the league. His fantasy ceiling is ridiculously high. I’m not saying he gets there, but his skill set has overall fantasy QB1 in its range. But after an on-the-whole horrific rookie year, he’ll need to pop as both a passer and rusher to make any sort of noise in fantasy, let alone be considered elite.

But, just look at what he’s capable of:

Wilson hardly ran last year. However, his three games with the most rushing attempts came in Weeks 14, 15 and 16. All four of his rushing TDs came after Week 12. The optimist in me likes to think we see a lot more of that all year in 2022.

The Jets also loaded their offense with talent around Wilson. They are taking the anti-Bears approach — and that’s exciting. Elijah Moore was already a potential star in the making. They retained rising slot man Braxton Berrios and vet Corey Davis. They added two viable pass-catching tight ends in C.J. Uzomah and Tyler Conklin. Then the team added Garrett Wilson and Breece Hall in the draft in the first two rounds.

Of all of the QBs going undrafted or coming off the board after the Derek Carr-Kirk Cousins-Trey Lance-Justin Fields tier, Wilson has the best chance to make the biggest leap in fantasy. And if he continues to run more, you can book that.

The New York Jets were one of the worst-case landing spots for Garrett Wilson in year one. There is no denying that. He was my pre-draft WR1, as he checks every box other than alpha size. He ran sub-4.4 in the 40-time, was an early declare from a top college program, demonstrated open-field elusiveness on special teams, is a polished route runner, and was highly productive as a junior.

Rookies are always so difficult to value in fantasy football because we haven’t seen them yet on an NFL field, but I assume Garrett Wilson will be a very good NFL receiver. I never like betting against rookie WRs, no matter the situation — see rookie A.J. Brown in Tennessee or even Elijah Moore on the Jets just last season. Wilson is most likely a long-term play in dynasty, but when you stash a WR on your bench, an early round one rookie with a great prospect profile is a savvy choice.

I’ll start by clearing the air: I love Elijah Moore. He flashed incredible consistency and upside as a rookie. In Weeks 9-13, Moore averaged 5.6 receptions, 79 receiving yards and 1 TD per game. He finished as a top-10 fantasy WR in three of those five games.

Moore was primed to be a solid fantasy WR2. Then the team drafted Garrett Wilson and Breece Hall and added C.J. Uzomah and Tyler Conklin and retained Braxton Berrios (who saw 10 targets in two of the team’s final four games last year).

That’s all good for the Jets (see above). But for Moore specifically, it just vastly reduces his chance at elite volume. There are now 7 viable targets in this offense. Moore should still be good, but if he’s going to be viewed as a potential fantasy WR2, he’s on my bust list. I’d prefer a player with an easier path to targets.

You do not need Corey Davis on your fantasy teams in 2022. Elijah Moore had one of the more spectacular rookie flashes in recent memory, considering he was paired with a struggling rookie Zach Wilson. With the 10th pick in the NFL Draft, the Jets took Garrett Wilson. Now, Davis is competing with a young breakout star and a top-10 pick. Davis, conversely, has been inconsistent and largely disappointing throughout his NFL career.

I am highly skeptical that a more run-balanced Jets team (NYJ was dead last in rush attempts in 2021 before snagging Breece Hall in round 2) with Zach Wilson at the helm can support more than two fantasy relevant receivers at any point. Because of Davis’ long track record of good-but-not-great production, I’m inclined to favor the younger receivers who have yet to disappoint in the NFL. The Jets can also save roughly $10 million against the cap by cutting Davis after 2022, so it’s unlikely he’s a part of the team’s future plans — there is no reason to prioritize his playing time over Moore and Wilson.

Is there that much of a difference in situation and talent between Breece Hall in 2022 and Najee Harris in 2021? Harris was able to finish last year as the overall fantasy RB3. My bet is that Hall finishes in the top 12.

Hall is a dual-threat RB, which is (almost, Derrick Henry the rare exception) a requirement to flirt with elite fantasy RB production. I’m bullish on the Jets offensive talent overall. If they are better than people expect (which I think will be the case), Hall will be one of the biggest winners.

Elijah Moore had 18 targets through his first 2.5 NFL games before suffering a head injury during Week 3. He missed Week 4 and barely played in Week 5. He only saw half the snaps again in Weeks 6 and 7 yet still had 6 targets in both games. This is important to note — regardless of injury or snap share, he was heavily targeted when on the field.

The next five weeks (9-13), Moore went on an absolute tear. He averaged 9 targets, 78 receiving yards, one touchdown and 20.1 PPR points per game. His target share during this stretch was over 23%, which is far more indicative of his ability than his season-long target share, thanks to playing under 50% of snaps in three games as a rookie.

Even with increased target competition, I’m still betting on a top-20 season from one of the NFL’s most talented wideouts.